First, I should probably say, Adventures of the Karaoke King was not at all what I expected it to be. I should also say that’s 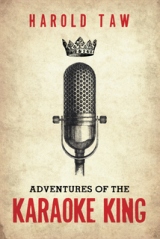 not a bad thing.  I’m not sure what I expected from Harold Taw’s debut novel, but it wasn’t the rollercoaster ride Guy Watanabe’s life turns into after he wins the coveted Karaoke King medallion.  Who could have thought one Karaoke competition would set off such a series of odd individual, yet related events.

The karaoke bars Watanabe frequents are not the nice bars a person would go to with colleagues or friends for a fun night of Karaoke singing. No, these are all places in different throes of a slow, drawn-out death. This also describes the clientele as well.

It’s important to know that Guy is depicted as a man caught in two of life’s major tragedies- divorce and the lack of cultural identity. He languishes in the last stages of his divorce, believing he can still win back his soon to be ex-wife if he thinks positively enough, and purchases the entire series of Tony Robbins’s self-help tapes on positive thinking. His lack of cultural identity doesn’t appear to be much of an issue with him initially. His mixed Japanese and Chinese heritage, with a dribble of Yakima Indian and African mixed in, does however, seem to be a sticking point with some of the Asian population of the urban area in Seattle, where he lives and works. It’s not until after he wins the first Karaoke championship and participates in what starts out being a one-night-stand with a Japanese fan (Megumi) that his lack of cultural heritage seems to become an issue for him. We learn more about how this affects him toward the end of the novel.

Watanabe’s strange road trip begins in his hometown of Seattle, Washington (where he wins the title of Karaoke King), takes him through the Pacific Northwest, parts of the Southwest, Japan and then returns him – barely alive — to Seattle, in an intermodal container  on the deck of a cargo ship. In between these destinations, the one-night-stand turned lover, talks

him out of his contest medallion which he decides he must get back  after she disappears. Thus starts his quest and his downhill slide into the abyss.  He is beaten practically beyond recognition by the hired thug of a wealthy Japanese businessman who calls Watanabe’s new love his property. Guy is then befriended by a gay man (Billy) who nurses him back to health after the terrible beating while regaling Guy with his life story. He heals and meets another series of odd characters, one of whom is a once famous midget porn star, named Milton, a man who gained notoriety through the sex scenes he played with a particular female lead. Guy takes up with Milton (who is psychotic as they come) in order to wreak his revenge on the business man, figuring the ex-porn star is just the man to help him do it. Watanabe’s “breaking bad” descent takes him from mild-mannered lawyer/Karaoke singer to near homicidal manic in just a few months.

Taw has given the competitive world of Karaoke a seamy underbelly, with all the weirdness of morality associated with prostitution, murder, greed, and gambling the reader can handle, or not. His characters are written large, and there seems to be no end to their depravity in word or deed, which tends to make them less believable and a bit tiresome. The explicit detail in some of the scenes of the book were off putting; however, much like a train wreck in motion, it’s hard to look away.

This is not your average ‘man seeks identity, man finds identity’ story.  It’s odd, grimy, eye opening and you may need a shower after you finish. But it’s also well written and well imagined. I don’t usually read books filled with explicit content, but as an author I had to see how Taw would handle things, and handle them he did. Very well in fact.

Have you read a book that turned out to be nothing like what you expected? Did you find that discovery to be annoying or welcome?