This is my favorite photo of myself. It was Christmas. I was two years old, clutching my teddy bear and wearing my cowgirl outfit. You can’t tell, but the boots were red, and I wore them everywhere. Later, I acquired a coonskin cap, just like Davy—Davy Crockett, King of the Wild Frontier. Back then I knew what I wanted out of life: the Western adventure I saw on TV. My heroes—Roy Rogers, the Lone Ranger, and the Cisco Kid.

Once I learned to read, I raced through the entire series of Zane Grey novels.  I pictured myself galloping bareback on a white stallion, as in Wildfire. A handsome cowpoke always lingered in the background. But as I grew older, I became a book snob. Only the classics for me. Another change came from reading Bury My Heart at Wounded Knee by Dee Brown. Perhaps some of those tales of the Old West were merely ‘tall.’ I even resisted the wonderful, wonderful Lonesome Dove—because “everybody” was reading it—that is, until I was marooned for eleven hours in the Salt Lake City airport by an ice storm. I picked up the novel—and then couldn’t put it down, all 843 pages.

This brings me to my most recent favorite book: News of the World by Paulette Jiles. It’s only 209 pages, but you’ll wish it were longer because of its two central characters, 72 year old Captain Jefferson Kyle Kidd and 10 year old Indian captive Johanna Leonberger.

News recaptures the best elements of the Western saga: it’s an old fashioned story with a straightforward plot of adventures along the road as Captain Kidd travels from north Texas towards the San Antonio area in a jaunty green wagon with the sign “Curative Waters Sulphur Springs Texas.” His goal: to return Johanna to her remaining family, her aunt and uncle. It is 1870. Texas is still under the iron thumb of Reconstruction. Indians remain a threat, but, now confined to reservation land,  starving, cut off from further food allotments until they return all captives, the Kiowa have sold Joanna for “fifteen Hudson’s Bay four-stripe blankets and a set of silver dinnerware” (9). 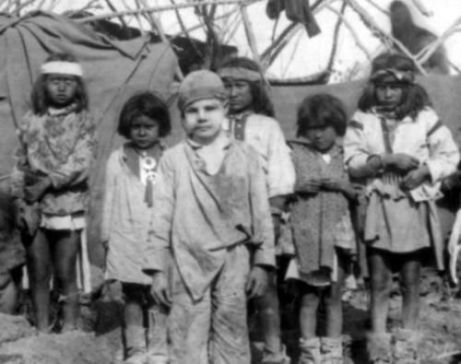 Both the Captain and Johanna are broken people, their lives frayed rope near to snapping. The loss of his wife to illness and his print shop to war, the separation from his daughters and their family back in the South, and his struggles to maintain his stamina, income, and dignity by touring small towns to bring the news of the world in staged newspaper readings–all these have left Captain Kidd sad, indifferent to, and soured by life. But his struggles are nothing compared to Johanna’s. At six she was ripped from her family—parents and sister slaughtered—to live with the Kiowa. She has virtually no memory of her people, her language, her past. Instead, as she silently endures her latest separation, she thinks: “My name is Cicada. My father’s name is Turning Water. My mother’s name is Three Spotted. I want to go home” (5). Pulled between two worlds, she is at home nowhere. Kidd’s friend Doris says of this:

At its deepest level, News is a love story. While at the beginning of their journey, the Captain worries that Johanna will run away or maybe stab him in his sleep, and she wonders, helplessly, who this new stranger is, where they are going, what he means to do with her, little by little they learn to communicate—by signs, by simple words and actions. He is Kep-den. She is Cho-henna. Till at the climax of the story, the turning point in the exact middle of the book, they fight a battle in which death would be better than defeat. Initially separated by language, age, and purpose, they have worked together and won. Now they grow toward each other in love. He has rescued her from the unspeakable, but she has rescued him from growing old and sad. She calls him Kontah—Grandfather. He tries not to let himself love her, not to think of her as a daughter because he knows, with each mile they travel, he is closer to giving her up.

Ledger drawing of Kiowa warrior with US Army (Pinterest)

One of the hallmarks of Jiles’ writing is her use of language. Her images are crisp and peppered with figures of speech that bring Texas vividly alive through all five senses. Describing buzzards circling overhead, Jiles writes of “their sudden dips, for they were curious birds and would drop like stones on those remarkable wings to inspect something new or unusual” (169). Of Captain Kidd’s two horses: they “stood side by side and ground up their corn with a noise like hand grinders” (37). And of Joanna, transformed by the “bold and somehow virile” women of Lotte’s establishment, who threw her “deerskin dress with its valuable elk teeth” out the window. “They pulled the feathers from her hair, which was crawling with graybacks.” (13) After two hours of wrestling in the bathtub, she emerges with hair “wet like strings” in clothes and stockings and shoes. (13-14) Joanna doesn’t know to pick up her skirts and so drags them through the mud, adding “several pounds of red sludge” (14).

But it is her symbolism that figuratively undergirds the story. As a young soldier in the War of 1812, Kidd was a runner who carried messages, “contents unknown” (209), from one camp to another. Later, as a printer, then a newspaper reader, he shares news of the world to small-town audiences eager for information about the outside world—the great cities of the east or Europe or even exotic unknown regions. But the most important message he carries is Johanna, riding in the bed of the excursion wagon now riddled with bullet holes and limping along on its wobbly wheels–Johanna, who is wrapped in a red woolen Mexican jorongo “so that she was the shape of a lime kiln” (47). At the end of the book, she says to him, recalling the sign on the wagon, “You are my cuuative watah” (208).  Does this seem overly obvious? It’s not in Jiles’ telling. 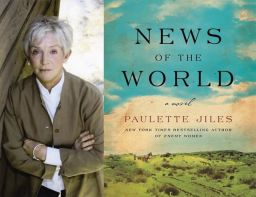 I have been a Paulette Jiles fan since her first novel,  Enemy Women, published in 2002. With News of the World, she is finally receiving the recognition she has earned: it has been shortlisted for this year’s National Book Award. It deserves to win, but it’s up against novels of splashy literary experiment that have received boatloads of publicity. Regardless, News of the World has provided me with hours of reading pleasure.

Now it’s your turn: How much attention do you pay to finalists and winners of the big book prizes, like the Pulitzer Prize, National Book Award, and Pen/ Faulkner Award for Fiction? Do you make a special effort to read any of the selections?