Five days from now I’m leaving my fluttery skirts and tank-tops behind and going to Iceland. I’ve skimmed a guidebook or two, but mostly I’m preparing by reading The Sagas of Icelanders. Sure, it might not be super relevant to cafés in Reykjavik or useful as to which camping sites are the best, but for cultural placement it’s hard to beat. When I needed a break from medieval action, I turned to a book that debuted at the Tennessee Williams Literary Festival in April, Margo Orlando Littell’s Each Vagabond By Name, winner of the University of New Orleans Publishing Lab Prize. 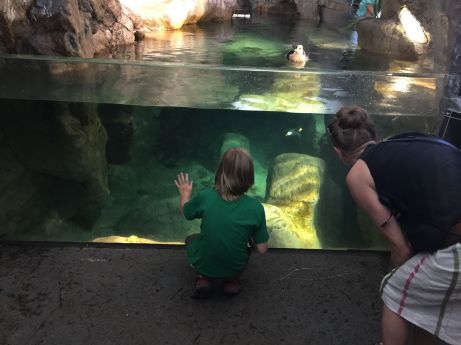 Me and my son, prepping for wild puffin sitings at the Saint Louis Zoo.

Books often talk to each other as you read them, so I wasn’t entirely surprised when these two stories were dialoging in my brain. The interesting discovery was the extent of the similarities. By intending to prevent an overdose of epic prose by titrating with literary fiction, instead I found that I was imbibing the same themes, looking at the same characters whether they were helming a longship or a Ford F-150.

About the books themselves: Egil’s Saga takes place between 850 and 1000, though it was written from 1220-40. It’s the only saga in which the author may be known – stylistically and otherwise it’s attributed to Snorri Sturluson (1179-1241), Iceland’s greatest medieval historian. I read the translation by Bernard Scudder, bundled with the majority of the sagas in a hefty volume put out by Viking in 2000.

Egil’s story begins with his grandfather Kveldulf and his sons, Thorolf and Grim. King Harald Tangle-hair has just come to the throne and vowed to unite all of Norway. Until he reaches this goal, he’s not going to brush his hair. (Historians of King Harald Fair-hair know how this one ends.) While Thorolf decides to join the king’s men, Grim sits out on the good advice of their father, who says that working with kings never ends well. Years later, with Thorolf dead and King Harald’s iron fist closing down, Grim decides to make a go at a freer life and heads to the unsettled island of Iceland. 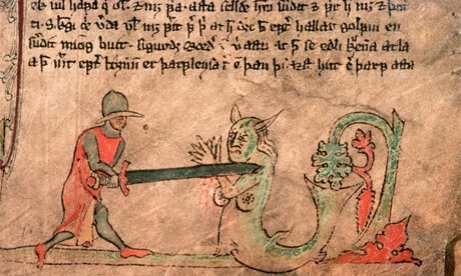 Things settle down for a bit as Skallagrim (previously known as Grim) proves a model homesteader: strong, wise, industrious, generous to the homesteading Vikings who follow. Enter his son Egil: strong as Grim even as a youth, but with a reckless temper and very loose sense of boundaries. It isn’t long before Egil slips away without permission (and after a murder or two) to go on the Viking raiding circuit with his older brother.

To the modern reader, it may seem like Egil – and the Vikings in general – live lawlessly. Selfishly. Every time I read about a successful raiding venture, I couldn’t help but pity the villagers and farmers pillaged by the worthy and powerful Vikings. But an honor culture has its own laws, complete with many instances of remuneration and its own concept of fairness. Here are the bones of one of the most illustrative raids:

The Vikings draw up a two week truce with the inhabitants of Courland. They trade with the people during the truce, then go back to plundering. On one of the inland raids, Egil gets separated from his party, and manages to find himself captured – the only time this happens to him in the saga. He soon befriends other captives, and they all escape, stealing the farmer’s chests of silver in the process (and what kind of farmer has chests of silver? Pretty much every farmer in the sagas.) What does Egil do? Since it would be cowardly to simply slink away with all the loot, Egil decides to return to the farmhouse and alert the drunken captors to their loss of both prisoners and treasure. Naturally, in doing the stand-up thing, he manages to slay most of the men and burn the rest alive after trapping them in their house. He returns to high five his new friends, then sets sail for Iceland. Thank Odin Egil’s conscience is clear.

Egil isn’t all bad boy.  He establishes himself well as a warrior, but he also has a gift for poetry. He often refers to himself as “the poet,” and while his first verses read perfunctory – or perhaps I was still squeamish about their violence – I was fully into the biting blend of metaphor and narrative action. By the end of the saga, when Egil is old and his raiding days are done, his poetry smooths into a beautiful maturity. I found myself reading it aloud to a low beat, realizing that throughout the whole saga I’d subconsciously read Egil’s verses as gangsta rap.

This was the first crossover point to modernity for me, the direct correlation between spears, gold, and fallen comrades to .44s, Bentleys, and well, fallen comrades. Say “Poet!” and I’ll bet most people still look for cravated, long-haired effetes, whereas recent decades have shown the cleverest rhymes to be some of the roughest and toughest.

The sagas are painted against a changing world, one where the Vikings are continually experiencing lifestyle erosion. The heroes realize that Norway is changing in a way that will never accept them (“outlawry” is a heavy charge, one kings certainly love to dole out). Iceland becomes a kind of refuge for these “outlaws,” a place free from the stifling law and royal land-grabbing consuming northern Europe.

Theft – and protecting one’s own – is front-and-center in Each Vagabond By Name. Vagabond was released early this summer, and although no specific year is given, little clues like internet map 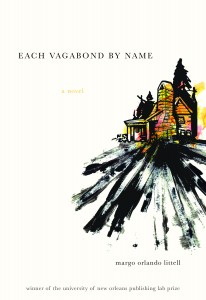 directions point towards present day. Like Egil’s Saga, the action of Vagabond follows a loner who appears a little grotesque (Egil was reputed to take after his father in the sort of muted hideousness that befits a giant warrior). This tough’s name is Ramsey, and he’s a one-eyed bartender in the sleepy Appalachian town of Shelk. Ramsey, a Vietnam vet with an outsider’s perspective, tries his best to keep the peace between his customers – distrustful miners – and the group of gypsies that mysteriously appear one autumn.

The “gypsies” – mostly down-on-their-luck runaways – go from town to town, breaking into homes, stealing cash and fencing any available trinkets. The townsfolk go from suspicion to red-hot anger as thefts increase. Everyone is desperate in their own way, from the shivering, hungry gypsies to the overworked miners and their families. And with Littell’s beautiful prose, it’s easy to feel on both sides of the conflict.

Here’s Ramsey, peeking in on one of the miners (the one whose wife has taken up with the ruthless leader of the thieves) after he’s driven him home.

All he could see was Jack at that table. Ramsey gritted his teeth as he drove away from the river and railroad tracks. He hadn’t broken the window at Jack’s house, hadn’t scattered beer cans or ransacked dresser drawers, but he still felt as though his pockets were full of someone else’s money and much-loved, much-protected things. (166)

We’ve all, if we look deep enough, understood clan at one time in our lives. Egil may be more provocateur, and Ramsey more peacemaker, but these are two sides of the same man. The idea that this story’s resonance spans a thousand years should come as great comfort to us, or find us in deep despair.

Have you, dear Reader, ever found yourself straddling the same story across the ages? And, no, I’m not talking about reboots and homages.