In the early days of December, in a fit of indignation , I joined two political groups.

This is surprising because although I’m political, I’m also a disillusioned introvert. Basically no system in America is left enough for me, and I wouldn’t attend your rally unless it had fewer than ten people. But I can really get behind Freedom of Speech.

Behold, the swagger of Beatrice: “L’Epee” (The Sword) by Alfred-Pierre Agache, 1896, portrait of Beatrice Evelyn Hall, author of The Friends of Voltaire.

The First Amendment – well, it’s the first, isn’t it? It’s pretty important. I like to hold to the Voltaire line: “I disapprove of what you say, but will defend to the death your right to say it.” Which incidentally Voltaire may have believed but actually didn’t say. That was written about Voltaire by S.G. Tallentyre. Who incidentally was named Beatrice Evelyn Hall.

It’s been one year since the terrorist attacks on the Charlie Hebdo office in Paris. Extremists, provoked by the depictions of Mohammed, stormed into a place of pencils and paper and comedy to make their point with blood. The word that came after the shock, however, was solidarity. “Je suis Charlie,” everyone wrote, as if they could fashion a country-wide shield to protect the artist-provocateurs from the bullets.

On November 13th of the same year, more than 500 people might as well have been in that office. Their provocation was not depicting the Prophet, but listening to music and eating in a restaurant or walking the streets or doing their jobs. The attackers didn’t care who was an artist or who was Muslim. Unable to make their point with pencils or words, they relied upon steel and c-4.

Of course we’re habituated to mass shootings in America, whether we call them acts of terror or not. And we view Free Speech from a slightly different angle than the French.

France, being majority Catholic and having the whole divine right of kings thing a little more in their faces, didn’t start the Enlightenment in the same place as America. We both had bloody revolutions that led to firmer written rights, but suffice to say we’re not carbon copies. Without getting into the details of laïcité (this is the French concept of separating Church and State and is something taken very seriously), let’s just say that religion is a separate thing in France. But unlike the U.S., there are not only codes that speak to religious tolerance but laws that enforce a neutral, secular public space (more on this later). So unlike the U.S., you actually can’t just spout whatever ideas you want in public. Your crazy has to know limits. 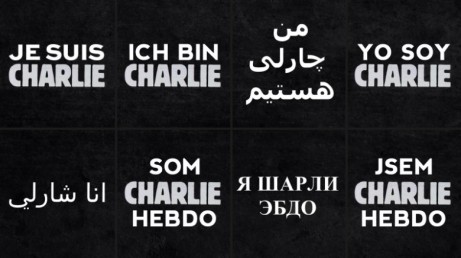 In July of 1990 the Gayssot Act passed in France. The rise of the extreme right helped its generation – they were getting very sneaky in their racist rhetoric. Jean-Marie le Pen, then leader of the Front National (the extreme right), had been prosecuted under “inciting racial hatred” in 1987, but was getting craftier in accomplishing his goal of being allowed to say “negationist” or “revisionist” things about WWII. For instance he was able to bundle his anti-immigration stance with liberals supporting laïcité by forcing the removal of Islamic girls’ hijabs from school. But the more he talked, the more he was heard. Debate started circulating about the Holocaust in Universities, and the Front National started gaining support. More people worried that discussion normalized the extremity of that viewpoint and banalized racism. When the Gayssot law finally passed, it forbade denial of crimes against humanity (i.e. Holocaust denial). It has umbrellaed in recent years to include the Armenian genocide, and yes, Jean-Marie Le Pen has been subject to hefty fines. Sometimes the sentence is jail.

It’s a complicated victory – some say a defeat of Free Expression. Robert Faurisson – another Holocaust denier – fled France after getting fined (and fired from his academic post). But he has been defended by none other than Noam Chomsky, who of course cites Faurisson’s right to his opinion. Chomsky even wrote a forward to Faurisson’s book.

So negationists cannot say what they want, but Charlie Hebdo can. Not everyone can be Charlie as he sees fit.

Why doesn’t France give every provocateur equal rights? Isn’t this, after all Voltaire’s country? What’s the harm of hate speech?

Recent memory counts the harm in the millions. France shoulders the additional burden of the Vichy complicity – it wasn’t until 1995 that France officially acknowledged and apologized for its role in assisting Germany with the genocide.

No, America doesn’t have the same complicated history regarding WWII. We’re different. But we’re not.

What if people go around saying slavery wasn’t all that bad here? Well, they do. We let them. 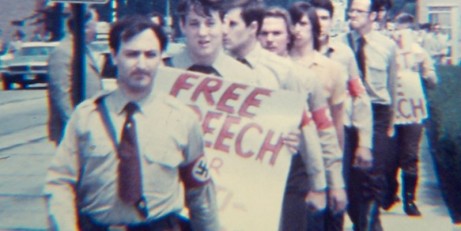 Neo-Nazis do their thing, too. In 1977, the National Socialist Party of America (don’t let the name fool you – these men are cowards fascists) won a court victory to hold a march through a predominantly Jewish neighborhood in Illinois where 1 in 6 residents was a Holocaust survivor or had a direct relative survivor. Attorneys for the town tried to bar their use of the swastika. They argued that the sight of the symbol was, for survivors, equivalent to a physical attack. In the end the cowards neo-Nazis won the right to march and use the swastika, which was part of their First Amendment rights. I wasn’t around, but I imagine it went down exactly like the scene in The Blues Brothers.

And since we’re talking comedy, Dear Reader, I hope you got in on last week’s grassroots smear campaign. It started a few days after ranchers led by Ammon Bundy took over Malheur National Wildlife Refuge in Oregon. They feel that their rights are being trampled by Big Government and that now is the moment to make a statement. As news of their takeover spread, people panicked. It reminded me of the rise of ISIS in the news – how we thought that if we ignored them, they’d just go away. But with all the avenues open to instantaneously shout our opinions, the internet begin taking aim. Message boards exploded with potential names for the group (YokelHaram, anyone? Y’allQueda?), the lead singer of The Decemberists proposed an erotic fanfic detailing of the situation on Twitter. It got real funny real fast.

And then began the mailings. Go ahead and google search for “Bundy militia mailings.” I’ll wait.

The story may yet end in bloodshed. But regardless of the form the finale will take, the distilled siding of the conflict will, I think, live on. And I while the ranchers are saying it’s about their rights, I think it’s interesting the lengths that we’re giving them for their version of free speech. (And what would it look like if the extremists didn’t look like poor misguided white men?)

In Free Speech news closer to my home, just last month the New Orleans City Council voted to take down Confederate monuments. The argument is that the monuments are, like the Confederate flag, symbols of that glorify oppression and breed racial hatred. But we won’t get to see them come down any time soon. Just today the company that was to begin the removal backed out of the job. The out-of-town owner and his wife had enough death threats and harassment that they have decided they cannot honor the contract.

Power and control don’t have to be loud, just as Le Pen and the KKK know. At least, not anymore. There’s such a rich recent history of oppression they represent, all they have to do is whisper. Besides, all they really want is the final word. 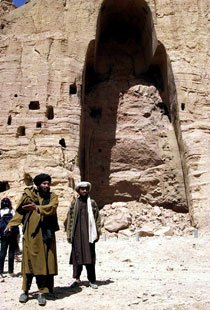 Taliban militia in front of what was once the tallest standing Buddha statue, which they destroyed.

There’s a Latin phrase, Damnatio memoriae, that means denying the memory of the dead. When you think about it, it’s the most terrifying thing. Kill the spirit, kill the body, kill the memory. Millions of people have already perished under this kind of hatred. Millions have been broken and lynched. For the negationists, there’s only that pesky final step.

In early December, the Front National won a victory in northern France when the country was still reeling from the blasts of November. In the aftermath I feared for France, for the terror backlash that I remembered so well after September 11th in New York City. Although I was staunchly antiwar at the time, I didn’t attend any marches. I could barely ride the subway after the attacks, much less bring myself to stand with a crowd, breathing in the towers’ ashes. So fourteen years later I was watching France, holding my breath. Would they succumb to xenophobia and warmongering as we had? Would the shadow of their retaliation swallow their moral compass? While I brooded over the French news, I realized I needed some grounding, something close to home to focus on. I remembered that the Sandy Hook anniversary was coming up, but couldn’t remember the exact date. I googled it.

What struck me were the images. But not in the way you’d think. There were the shocking images I remember seeing in the newspapers, the ones I’m sure you know. But what drilled right through me were the altered pictures. Eight of the top twenty-one images were photoshopped. They pointed to the “inaccuracies” in the narrative. When you clicked on them, they went to extremist websites that documented why Sandy Hook was an inside government job aimed at stirring up public indignation. The government wants to disarm us. Don’t let them control us. We need these guns. We need them so desperately, because without the guns we have no voice. Our weapons, you see, they are so loud…

So I took my children to their first rally, Everytown for Gun Safety. It was being held in the lower Ninth Ward here in New Orleans, just a few days before the Sandy Hook anniversary. No, there weren’t hundreds of people in attendance. There weren’t counter-protests or angry voices. There were coloring sheets and a second-line parade. And there were three extra hearts there pumping blood, listening to stories on how to be a human, and dancing. Three extra people that hadn’t been there before, saying, “I remember.”

And you, Dear Reader, eight out of twenty-one photos declaring Sandy Hook a hoax. Thirty-eight percent. I would ask if that scares you… But I already know that if it doesn’t, nothing really will.

Let’s have it. Is there any point when you would limit Freedom of Expression? Do you think libel laws address this?

8 thoughts on “How Many Charlies Fit into a World?”