Imagine yourself near the foot of Boston’s State Street, just around the block from Faneuil Hall. Look up the hill and you can see the ornate façade of the Old State House and the site of the Boston Massacre. Look the other way and you’re gazing down historic Long Wharf to Boston Harbor. Now tip your head back and find a row of windows four floors above the Dunkin Donuts on the corner. Here, surrounded by

reminders of the colonial past, is the Writers’ Room of Boston. For those of us who work here, this modest site is an important landmark in its own right.

We are a motley crew of retirees and students, experienced writers and those just starting out, people with agents and people without. Most of us have day jobs, as booksellers, editors, journalists, bartenders, architects. Some of us – like Laura Van den Berg and Boston’s new Poet Laureate, Danielle Legros Georges – are highly acclaimed published authors. Some, like me, are still waiting to be discovered. Members’ writing falls into a wide spectrum of genres, including poetry and short stories, comics, memoirs, essays, and novels of all types. Indeed, many members work in more than one genre. Louie Cronin, formerly the associate producer of Car Talk and a writer for the show, is also an essayist and is currently working on a novel. Alexander Danner, a previous recipient of one of the Room’s four annual fellowships, writes stories for comics and graphic novels as well as nonfiction and fiction. Katie Li is a contributor to the Huffington Post, a playwright, and a novelist. And the list goes on.

The Writers’ Room was founded thirty years ago to give creative writers a secure, affordable place to work. From the outset it has been associated with high-profile writers with ties to the Boston area who have served as founders (novelist and short story writer Ivan Gold), founding financial supporters (Robert Parker and David Mamet), and members of the Advisory Board (Junot Díaz, Derek Walcott, Anita Diamant, and Ha Jin, among others).  Affordable it certainly is. The current monthly fee is scarcely more than the price of a four-week subway pass, and the generous fellowships provide recipients with a year’s membership free of charge.

The modest fees are a great boon, especially in a city as expensive as Boston. But the Writers’ Room provides its members with more than a terrific deal on a downtown desk. It’s a place where people finish things. Like many of us, the poet and memoirist Mary Bonina had to search far and wide to find a good place for writing. The public library didn’t fit the bill; neither did coffee shops, park benches, or the kitchen table at home. Either there was too much noise, or there were too many distractions, or there was no place to plug in a laptop. But once settled in the Writers’ Room, Mary quickly polished off a poetry chapbook and a full-length poetry collection and put the final touches on the memoir she’d been trying to finish for years. Ask any of the parents of small children –there are several among the members – and they will tell you how much they appreciate being able to put aside the demands of family life for a little while to concentrate on their writing. Some of us never even bother to learn the WiFi password, which is tucked away discreetly in the office as a courtesy to those who fear they might be seduced by e-mail or Facebook or Angry Birds if they were to go online. The number of works completed at 111 State Street is considerable and is rising all the time. 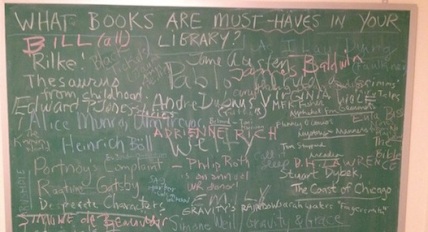 But though the Room is a refuge from the outside world, it is by no means an isolation chamber. A recent New Yorker piece about writers’ rooms, with its references to “a gentle sense of competition” and “replicating the water-cooler experience with ersatz colleagues,” somewhat misses the mark, I think. My fellow members are anything but “ersatz” colleagues. They’re the real deal. And as Mary Bonina puts it, our commitment to writing breeds not competition, but a shared faith: “not pressure, but faith in producing something that will be meaningful to other people.”  What’s truly remarkable to me is that this sense of community flourishes in a setting where silence is the rule. We meet in the kitchen or the office or at our public events, but the workroom is always as quiet and still as a Trappist retreat. Yet somehow, even when we don’t exchange a word with anyone all day, even when we’re there all alone, the feeling of comradeship, of a shared passion and sense of purpose, is always there.

When I became a member last fall, I was tempted at first to take my editing work with me and divide my time between my writing and my day job. It was a bad idea. The whole point of a dedicated space, after all, is to leave everything else on the far side of the door. For me there is something almost ritualistic about the process: get off the subway, bypass the tourists, dodge the taxis and the lumbering duck boats. Savor the aromas of coffee and Dunkin Donuts that permeate the elevator lobby. Turn the key in the elevator, go up, sign in. Take a deep breath. Open the door to the workroom. And write.

Photos 1 & 3 courtesy of The Writers’ Room of Boston; photos 2 & 4 courtesy of Mary Bonina.

Where do you pursue your creative work? Are you someone who needs peace and quiet, or do you work well in a public space?

11 thoughts on “The Writers’ Room of Boston”