On the one hand you have feminism. On the other, you have romance and comedy. Assuming both hands belong to the same person – say, Anne Tyler – together they reveal more of the human

condition than either could on its own. Welcome to Vinegar Girl, a slender volume that might be heftier than you think.

In 1917 Virginia and Leonard Woolf founded Hogarth Press with an intention to publish the “best new writing of the age.” Nearly 100 years later, Penguin Random House borrowed the name for a series where bestselling authors rewrite Shakespeare’s plays – as novels – for modern consumption. Among others, Jeanette Winterson has transformed The Winter’s Tale into The Gap of Time; Howard Jacobson has recomposed The Merchant of Venice as Shylock is My Name; and Margaret Atwood’s Hagseed (a retelling of The Tempest) is set for publication in October.

Tyler chose to update Taming of the Shrew because – she claims – she loathes Shakespeare and this play in particular. “It’s such a crazy story… People behave so inexplicably that you just know there’s another side to it. Someone’s exaggerating; somebody’s putting his own spin on things. Let’s just figure out what really happened.” What better way than to rewrite?

Before I describe the book, let’s look at the play. Written near the beginning of Shakespeare’s long career, Shrew bears the marks of early authorship: a complicated plot with way more subplots and comic tropes than you find in his later work. The story is presented as a play within a play. Yet there is no end-piece where the outer play gets resolved. The inner play? Delightful. Though you’d best keep hold of your program: not only are there 21 characters (excluding the 10 or so we meet in the outer play), but at least four of them pretend to be someone else.

That said, there is something both startling and timeless about the central tale. Most comic love stories take the following form: boy meets girl, they fall in love, complications ensue, lovers struggle to overcome the complications and boy gets girl. Yet this particular rom-com breaks the mold right after “boy meets girl.” They don’t fall in love – mutual love at least – and the plot is focused on their courtship.

“The Taming of the Shrew,” 1967, starring Richard Burton and Elizabeth Taylor

The “girl” is a gorgeous spitfire (or shrew) named Katherine. As such, she is filled with venom: physically kicking and hitting and verbally hurling “insults with great accuracy at anyone within her orbit. But the “boy” (a nobleman named Petruchio) is smart enough to know he shouldn’t court her directly. Instead – and this is the meat of the play – he wins her affection through a series of clever tricks.

In the script those ploys look pretty savage: when Petruchio strikes a deal with her father, Katherine is forced (against her will) to marry him. Immediately afterward, he snatches her from the wedding feast and bears her to his home. The journey is long and arduous as he makes her walk, claiming his horse is unworthy of carting her. Similar treatment occurs when they arrive: her dinner is not good enough, and thus she cannot eat. The robes he ordered are not fashionable, and she must wear her dirty clothes. This treatment alone would be enough to enrage any feminist. Add to it the fact that Katherine refused Petruchio’s proposal and you have sufficient evidence to arrest the man for kidnapping and/or spousal abuse.

But this is Shakespeare, writing in a period of great upheaval. When the play appeared sometime around 1591, England’s social hierarchy had begun to shift: for the last three decades merchants, actors, servants and apprentices had been scoring economic gains. Now they busied themselves with climbing the social ladder. As is the case today, those already in power regarded such changes with alarm. Katherine thus represents all who wish to overthrow the status quo. Ironically, the one who might best have identified with her was Shakespeare’s monarch, Elizabeth I.

By the play’s end however, Katherine makes a speech worthy of delivery in the House of Lords,

Such duty as the subject owes the prince,

Even such a woman oweth to her husband

And when she is froward, peevish, sullen, sour,

And not obedient to his honest will,

What is she but a foul contending rebel

And graceless trait to her loving lord?

Wait. What? How did that happen? 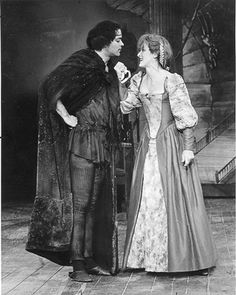 Meryl Streep and Raul Julia in “Taming of the Shrew,” Shakespeare in the Park (1981)

Through the agencies of an even more-venerated force. One that in the script is nearly invisible: Katherine and Petruchio are deeply attracted to each other. Traditional stagings of the play include a lot of physical contention. My favorite recorded scene has Raul Julia grabbing the foot of Meryl Streep in a kind of wrestling move. At first she wants to kick him, but then he strokes the foot, and you watch her struggle against the need to pull him close. That tension – between attraction and combat – is what makes the play. When performed well, the interaction between Katherine and Petruchio feels like an ancient rite. In this manner – appealing to her primal needs – Petruchio finally wins the heart of Katherine.

How does Vinegar Girl compare?

Tyler’s Kate is less angry and more emotionally tone-deaf than her counterpart. As a teacher’s assistant, Kate manages to offend both her pre-Kindergarten students and their parents, telling one child that she prefers the art of another and wondering why she must apologize. Instead of kicking and biting, Kate swats at shrubbery. And when criticized, instead of haughty comebacks Kate offers nothing in response.

Vinegar Girl lacks many of Shrew’s complications. The play within a play has disappeared. And while Katherine’s sister is courted by two suitors, Kate’s is courted by only one. (Yet here they do have one thing in common: all suitors wear the guise of tutors. Who says love is not instructive?)

There are other differences as well. Tyler has toned down the woman-as-object attitude we find in Shrew. Where Katherine’s mercenary father sells his daughters to the highest bidder, Kate’s dotty dad assumes she will continue to live with him after her marriage. And instead of milking the humor in mistaken identity, Vinegar focuses on the question “Can we really know another’s heart?”

The most salient difference between play and novel involves the central relationships. Though Petruchio adores Katherine, he does not want her independent. In fact, he only ends his game when she submits to his will completely.

In contrast, Kate’s suitor suggests that marrying him will allow her to complete a post-graduate degree. We are not told the country of Pyotr’s origin, yet it’s clear that women there are strong. Unlike Petruchio, Pyotr doesn’t trick his Kate. Instead, with the diction of one who thinks in another language, he praises her beauty and spunk, saying “You are very independent woman and you have the hair that avoids beauty parlors and you resemble dancer.” Kate’s heart is won the old fashioned way, through courtesy and tact.

The one thing both courtships have in common is transformation. While Katherine learns the rewards of placing another’s well-being ahead of hers, Kate discovers that she is valued and loved. Like Katherine, near the tale’s end Kate makes a speech. Only instead of pledging loyalty to her lord and master, she expresses empathy with her partner’s plight,

“It’s hard being a man. Have you ever thought about that? Anything that’s bothering them, men think they have to hide it. They think they should seem in charge, in control: they don’t dare show their true feelings. No matter if they’re hurting or desperate or stricken with grief… They’re a whole lot less free than women are… Women have been studying people’s feelings since they were toddlers… I’m not backing down… I’m letting him into my country. I’m giving him space in a place where we can both be ourselves.”

We’ve come a long way, baby (to rephrase an advertising slogan once aimed at feminists). Though Tyler’s Vinegar is less complicated than Shakespeare’s Shrew, I believe it is no less true to its time. Instead of slapstick comedy, Tyler hands us subtle irony. Instead of power-struggle leading to submission, her characters move from emotional distance to empathy. I think she has done a good job of rewriting an old story for new times.

Now it’s your turn to weigh in: What play by Shakespeare would you rewrite?