Everybody knows the story of the Three Little Pigs. Or at least they think they do. But I’ll let you in on a little secret. Nobody knows the real story, because nobody has ever heard my side of the story.

So narrates A. Wolf in The True Story of the Three Little Pigs. In this contemporary retelling of a classic, author Jon Sciezka makes a good point: it’s a rare fairy tale that invites us to side with a villain. That would undermine his role. Most villains fall into one of three categories – brutes, demons or witches. The more distant and repulsive they appear, the better they can do their job. That job: to thwart, confuse and/or destroy.

What’s interesting to me is how these actions lead to growth. Stasis is the real enemy – when we don’t change, we start to die. Perhaps the best illustration of this would be a coming-of-age story: Both Thumbelina and Tom Thumb begin with barren, older parents to whom a child arrives. In each case the child is unusually small and seemingly helpless yet must achieve some sort of independence.

In these tales, villains take the form of brutes: A raven kidnaps then deposits Tom in a castle where a giant eats him. Thumbelina is captured by a toad that intends for the girl to marry her son. In both cases the children escape by using their wits. Tom makes a ruckus in the giant’s belly, while Thumbelina befriends a fish and butterfly that collaborate in her rescue. The skills to outwit those that would destroy us and befriend those that might help are crucial to our survival.

Whether shaped like animals or humans, brutes embody cunning and power. Bluebeard is a classic. In a story by the same name, this villain woos three sisters with entertainment and clever talk. The elder two are repulsed by the color of his beard, but the youngest – a rebel – finds him strangely attractive. After he and the youngest are married awhile, Bluebeard prepares for a voyage. Giving his wife the keys to the castle, he warns her not to use a particular one. Being a woman (and therefore curious), she decides to search for the corresponding lock. Finding it, she uncovers the butchered remains of her husband’s earlier wives. When Bluebeard returns, he discovers her treachery and threatens to kill his wife. Luckily – like Tom and Thumbelina – our hero outwits her captor (by secretly calling for help).

Bluebeard, his wife, and the keys in a 19th-century illustration by Gustave Doré (wikipedia)

Might the brute be a stand-in for the dark side of parenting? One could make the argument that opposition and harm are twisted or exaggerated forms of protection and instruction.

Iron John is a variation on this theme. Its giant is an apparent brute who winds up a father figure: After murdering several huntsmen, John befriends a young prince. He sends the prince into the world, promising aid when his name is called. The youth requests John’s help on several occasions, and afterward returns the tools the giant loaned him. The tale ends when the Prince’s loyalty unwinds the spell that bound the wildman. In Robert Bly’s 1990 retelling, this tale becomes a story of male liberation from the rules and restrictions of urban life.

My favorite kind of villain – the demon/devil/trickster – is fond of bargaining. In one example a Pied Piper agrees to rid the village of Hamelin from rats in exchange for money. Using an enchanted flute, he lures the rodents to a nearby river and causes them to drown. When the villagers refuse to pay the Piper, he retaliates by exiling their children in much the same way.

Can the Piper’s revenge be justified? He kept his side of the bargain. It’s the town that reneged. In some versions of this story local citizens go so far as to claim the Piper planted the rats in order to be hired. Maybe Hamelin is the true villain. Or perhaps – as in a fight between two siblings – both are slightly at fault.

The story of another bargainer, Rumplestiltskin, melts my heart. All the guy wanted was a child. At least that’s the case in a modern retelling by Michael Cunningham (entitled “Little Man”). In it, a social-climbing miller brags to the king that his daughter can spin gold from straw. The demon helps her do this three times – the last, in exchange for her firstborn – and she winds up marrying the king. When their child arrives, Rumplestiltskin comes to collect. The new Queen bursts into tears (which represent purity and often serve as a feminine super-power). Then to his everlasting regret Rumplestiltskin makes one last deal: allowing her to keep the child if she can guess his name. When she does, the trickster becomes infuriated. “In his rage,” according to the brothers Grimm, “[Rumplestiltskin drives] his right foot so far into the ground that it [sinks] in up to his waist; then in a passion he [seizes] the left foot with both hands and [tears] himself in two.” Now tell me – in this tale, who harms whom?

Goldilocks involves a trickster of a different sort – one more closely related to witches. The original tale describes an old woman named “Silver Hair,” who breaks into homes. Is she lonely, malicious or simply curious? Depends on who’s telling the tale. For all we know, she might even have dementia. In any case, she enters the home of three bachelor bears who are taking a walk as their porridge cools. She tastes their food and tests their chairs and falls asleep in one of their beds. 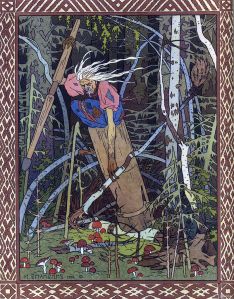 Over time the tale of Silver Hair evolved to Goldilocks, and the bachelors became a family – all of which make it easier for kids to understand. Yet I find Silver Hair more interesting, especially when one bear discovers her and cries, “Someone has been lying in my bed – and here she is!” causing the intruder to flee. Don’t you love the image of a silver haired woman, running hell-for-leather toward the woods?

Many women are mothers – the parent who most affects our youth. An older woman with experience and power is daunting, no matter what her intentions. As an evil stepmother, she’s hard to beat. Hence we have a slew of nameless witches connected with Sleeping Beauty, Snow White and Cinderella. And let us not forget the witches (again nameless) that capture Hansel and Gretel, Dorothy (Wizard of Oz) and Rapunzel. Nor the one who helps and harms the Little Mermaid (by giving her legs and taking her speech).

Why nameless? See my second paragraph above – the less we know about villains, the more power they seem to have. But that’s another essay (about the shadow archetype) for another time.

The witch’s counterpart – wizard or sorcerer – is not so plentiful in European folktales. King Arthur has Merlin, but Merlin is not a villain. In Midsummer Night’s Dream, Oberon (the Fairy King) is more trickster than demon. While the evil Sauron (Lord of the Rings by J.R.R. Tolkien) and Voldemort (Harry Potter series by J.K. Rowling) do not appear until the twentieth century. When it came to wicked elders during the last few hundred years, women had the market cornered. (Statistically, we lived longer too.) But then, most brute-villains are male.

“All happy families are alike; each unhappy family is unhappy in its own way,” writes Leo Tolstoy. He then proceeds to tell the unhappy story of Anna Karenina. In focusing on kith and kin, I think he has a point. At least where villains are concerned, our families of origin have served as models. No wonder our villains resemble the darker side of our parents and siblings. Like Tolstoy, I find knaves more interesting than knights. Villains are helpful: they quicken a plot and make our heroes heroic.

Dear Reader, who is your favorite villain and why?

8 thoughts on “The Case for Fairy Tales Part 2: Villains as Allies”