Whew! The judges for the Atlanta Writers Club 2016 Writing Contest were busy this year doing the difficult job of choosing three winners out of a field of 104 entries, about double the club’s usual 60 to 62. But choose they did.

Sandra Hood took the Terry Kay Prize for Fiction for her short story “Listening Under Water.” Pamela Wright was winner of the Rick Bragg Prize for Nonfiction for her essay “My Soul to Keep,” and  Teresa Peipins won the Natasha Trethewey Prize for Poetry for her poem “Sending Out Roots.”

The increase in the number of entries in this year’s contest could be attributed to the club’s vamping up of the contest’s influence in 2014 when the Atlanta Writers Club (AWC) celebrated its 100th anniversary. “We gave it the heft that a 100-year-old writing institution deserves,” said Nedra Roberts, vice president for Awards, Contests, and Scholarships.  For example, the club gave names to its prizes by reaching out to Terry Kay, Rick Bragg, and Natasha Trethewey, former U.S. poet laureate. These are big names in the publishing world, but they also friends of the AWC, Roberts said. And the AWC stepped up its awards to $300 and a plaque, compared to $50 and a certificate in the past. The awards will be presented at the May 21 AWC meeting.

“The runners up don’t get money and a plaque, but they get recognition in the e-Quill [AWC’s online newsletter], in a press release, and on our website,” Roberts said.

The finalists for fiction were Mary Beecroft for “From 205 South Mill Lane” and Lee Gimenez for “The Perfect Candidate.” Finalists for nonfiction were Elene Catrakilis for “No Ordinary Place” and Marty Aftewicz for “Sweetness,” and finalists for poetry were Arthur Murphy for “Love Beyond Mathematics” and William Hines for “Modern Poetry.”

“Presently, we’re looking for a venue where we can publish the winning entries,” Roberts said. “We can’t publish on the website because that indicates publishing, but it would really be great to have their work published in a publication like the Georgia Review and Chattahoochee Review.  We’re working on it.”

Roberts said one judge for each category chooses the winners, and all are published, experienced writers. Some are teachers, as well. The fiction judge alone had 51 entries to read. Each entry must 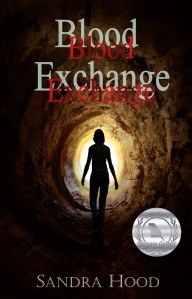 Hood’s story is about a couple who suffer the loss of a child and about the unusual ways people deal with such a tragedy and repair their relationship. “It has a slight level of weirdness to it,” she said. “He [the father] wears headphones to block out the world, and that hurts the relationship.” She said the story had been in her head for about 10 years. “When I heard about the contest, I thought it was the perfect time to write it, and it came out very easily.”

Hood, who has been an AWC member for years, self-published a novel, Blood Exchange, in 2014, which was a runner-up for the Sci-fi/Paranormal category of the Georgia Author of the Year Award, presented by the Georgia Writers Association. Working as an accountant during the day, Hood said, “It’s hard to come home sometimes and be creative when you’ve been analytical all day.”

Teresa Peipins also has a novel (under the name Terez Peipins), The Shadow of Silver Birch, published by Black Rose Writing. It’s set in post-World War II Europe. Her parents were World War II refugees from Latvia who settled in a small town outside of Buffalo, N.Y., where Peipins grew up. She has also published three small books (chapbooks) of poetry.

Her poem was influenced by her parents’ history and her own travels. She lived in Spain for 18 years and has been in Atlanta for two years. A sense of place and home is central to her writing. “In ‘Sending Out Roots,’ I used the concept of a garden,” she said. “It’s a metaphor of a garden as a place where you establish yourself.”

Currently, she’s working on a sequel to her novel in which she focuses on the children of her original characters.

Pamela Wright’s entry is a personal essay centered on her relationship with her older brother who died when he was 13 and she was eight. “It stresses the relationship between us – it was just the two of us – and the experience of then being an only child and coming into adulthood,” she stated. Wright said she is really a humorist writer, so this was a bit off the beaten path for her.

This is her first entry to the AWC writing contest, but she has published other pieces, which are “Somewhere Under the Florentine Moon” in fullgrownpeople.com (it won a 2016 Solas Award for Best Travel Writing, Funny Travel Category), “Back to My Roots” in the Atlanta Journal-Constitution’s Personal Journey section (it’s about Southern women and big hair, she said), and “Take My Breath Away” in the anthology “Not Your Mother’s Book. . . On Cats.”

For anyone interested in entering the 2017 writing contest, become a member of the AWC and keep an eye out for the announcement calling for entries in February. Who knows? You just might be the next winner.

If you have ever entered a writing contest, what was your experience?