Before the advent of greeting cards and the computer, men and women professed their passion  and adoration for each other with handwritten letters. It is surmised the first love letters were written by King Henry VIII to Anne Boleyn in 1527. That’s right, in his younger years Henry was a romantic softie. In his obsessive seven year pursuit of Boleyn, one of his seventeen passionate missals reads,

Written by the hand of him who is, and always will be yours. . .

And in another he penned, “henceforth my heart will be dedicated to you alone.”  Obviously, the chase was more fun than the marriage since three years after they wed, the king who gave Boleyn his heart, took her head. 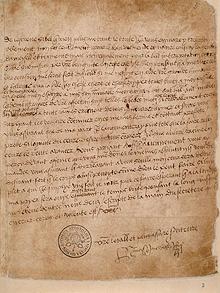 One of King Henry’s letters to Anne Boleyn(i.telegraph/co/uk)

None of Boleyn’s responses to Henry exist. His letters to her have been ensconced for years in the Pope’s private library at the Vatican and have been seen by only a few people deemed qualified. However, one letter, written in French and signed “H seeks A.B, No Other Rex,” alongside his beloved’s initials in a heart, was on display seven years ago during a Henry VIII exhibit at the British Library.

Another Englishman, Winston Churchill, who never appeared the ardent kind, corresponded frequently with his wife Clementine. Churchill would start his letters, “My Darling Clemmie,” and often sign off, “With tender love from your devoted, W.”

It is to be expected that F. Scott Fitzgerald would express on paper his fondness for Zelda. And who doesn’t know of Robert Browning and Elizabeth Barrett’s adoring declarations? But who would guess that author E. B. White’s dog Daisy would pen a letter (written of course by White) to White’s wife telling of the happiness and love regarding the impending arrival of a blessed event?

It is interesting to note that some letters proclaiming love have been written to unidentified women. Such is the case of Ludwig van Beethoven when he penned, “Though still in bed, my thoughts go out to you, my Immortal Beloved, now and then joyfully, then sadly, waiting to learn whether or not fate will hear us . . .” Who these words were meant for remains baffling. The letter was found in Beethoven’s possessions after he died; either it had never been sent or was returned by the unnamed object of his affection.

Another musician, Jimi Hendrix, also wrote to a mysterious woman:

“Little girl,” he wrote, “ happiness is within you. . . unlock the chains from your heart and let yourself grow—like the sweet flower you are . . .”

Men aren’t alone in conveying their feelings. Victor Hugo’s mistress, Juliette Drouet, a courtesan and actress, gave up her professions to follow him to the Channel  Islands when he was exiled for political reasons. She wrote over 20,000 letters to Hugo, romantically leaving them in the hollow of a chestnut tree for him to discover.  Part of one reads, “. . . You are not only the solar spectrum with the seven luminous colors, but the sun himself, that illumines, warms, and revivifies! This is what you are, and I am the lowly woman that adores you.”

Then there are the effusive words written by artist Frida Kahlo on October 1946:   “ . . . I don’t know how to write love letters.  But I wanted to tell you that my whole being opened for you. Since I fell in love with you everything is transformed and is full of beauty   . . . love is like an aroma, like a current, like rain.  You know, my sky, you rain on me and I, like the earth, receive you . . . ”  Kahlo wrote this and twenty-four other letters, not to  husband Diego Rivera, during one of their two stormy marriages, but to her Catalan lover, Jośe Bartoli. These letters, many containing more than 100 pages, were auctioned off in April 2015 at Doyle New York, netting $137,000.00.

Note the line around the names Mara and Bartoli (Mara, being his pet name for her) that links her heart and her head.

Another artist, Georgia O’Keeffe, sent sizzling words to her lover, and later husband, photographer Alfred Stieglitz. “Dearest — my body is simply crazy with wanting you — If you don’t come tomorrow — I don’t see how I can wait for you — I wonder if your body wants mine the way mine wants yours — the kisses — the hotness — the wetness — all melting together — the being held so tight that it hurts — the strangle and the struggle.”

Letters written by same sex couples have also been recorded. Eleanor Roosevelt wrote to American journalist Lorena Hickok, “Hick, darling . . . Ah, how good it was to hear your voice … Funny was that I couldn’t say je t’aime and je t’adore as I longed to do, but always remember … that I go to sleep thinking of you.” And English poet Vita Sackville and author Virginia Woolf, both married, became smitten with each other after several years of friendship. In a letter to Woolf, Sackville stated,  “I shan’t make you love me any the more by giving myself away like this –But oh my dear, I can’t be clever and stand-offish with you: I love you too much for that . . . “

Alan Ginsberg, Beat Generation godfather, wrote to poet Peter Orlovsy. “Dear Petery . . .O Heart O Love everything is suddenly turned to gold!” And  Lord Alfred “Bosie” Douglas, better known as Oscar Wilde’s lover, than as a poet, received these words from Wilde, “ My Own Boy, . . .Your sonnet is quite lovely, and it is a marvel that those red rose-leaf lips of your should be made no less for the madness of music and song than for the madness of kissing . . . “

The intense affair of “Bosie” and Wilde was brought to a halt when Lord Alfred’s father, a homophobe, spouted to the public of Wilde’s behavior. Wilde sued Douglas for slander, but the tables turned, and Wilde was sent to prison for “the love that dare not speak its name.”  Although Wilde and Bosie renewed their relationship  after Wilde was released from jail, the affair only lasted a couple of months.

Sadly, some passionate letters are not always well received, such as those Charlotte Bronte sent to her French literature professor Constantin Heger. She was besotted with the married man and wrote him twice a week declaring her all consuming love. Finally, Heger grew so irritated he tore up Bronte’s letters and told his wife to deal with the problem. She advised Bronte to write only every six months, then dug the shredded pieces out of the trash and sewed the strips together. Today the four stitched-up letters can be viewed in the British Library.

Expressions of love typed on the computer or by texting can be meaningful, but still those with a personal touch seem to be more romantic, more thoughtful. The words don’t even need to be on a beautiful piece of vellum written in a fancy script, but can be scrawled on a napkin, a piece of brown paper, or on a yellow- lined pad such as the one on which Johnny Cash wrote to June, saying,

“. . . The fire and excitement may be gone now that we don’t go out there and sing them anymore but the ring of fire still burns around you and I, keeping our love hotter than a pepper sprout. . .”

Now, Dear Reader, it’s your turn: How do you think technology has affected correspondence, specifically something as personal as the love letter?

9 thoughts on “The Art of the Love Letter, from Henry VIII to Johnny Cash”