“Have you ever heard a blindfolded octopus unwrap a cellophane-covered bathtub?”

Not long ago I went to a silent-reading event at the Colonial-era Loring-Greenough House in Boston’s Jamaica Plain neighborhood. Apart from the whisper of turning pages (I saw no e-readers), attendees sat and read their books in complete silence. This is my favorite way to read: no bells and whistles, literal or figurative, but complete immersion in the words on the page. I know that playing music enhances the pleasure of reading for many folks, in much the same way as settling down with a glass of wine or a mug of coffee, or sharing the armchair with a cat. I myself have a happy childhood memory of taking a tall glass of lemonade and a stack of ginger snaps out to the hammock with my latest library find, so I’m on board with the idea of piling pleasure upon pleasure. But for me, music – unlike ginger snaps – is a distraction from, not an enhancement of, the reading experience.

Some readers enjoy listening to music tailored to what they’re reading, perhaps the soundtrack of a movie or TV show based on the book. More inventive readers – or ones who are reading something that hasn’t been filmed – might choose a particular artist or album that they think pairs well with a specific author or book. A quick search of Twitter (#amreading #playlist) turns up some intriguing pairings: My Chemical Romance/The Iliad, 8 Mile/Jorge Luis Borges, Art Pepper/Michael Connelly, the soundtrack from the video game Fantasy VI/The Giver. Occasionally, readers can also track down the music that authors were listening to as they wrote. Here again Twitter (#amwriting #playlist) is a good starting place.

The Book Notes series on the blog Largeheartedboy invites authors to create a playlist that relates in some way to one of their recent works. Some contributors post straight-up writing-process playlists: the one from Bret Easton Ellis for Lunar Park, for example, is an eclectic assortment of songs by musicians ranging from Barbra Streisand to Mavis Staples. More often, contributors to the blog make a compilation that evokes the mood of their book or follows its narrative arc – what children’s novelist Christopher Edge, in a thoughtful how-

to piece for the Guardian newspaper, describes as “curating” the reading experience.

For those who are content to match the music to the genre rather than to a specific book, the online music service Pandora Radio has channels called Regency-Era Reading, Dystopian Reading, and Romance Reading, among others. Fantasy lovers can also listen online to Radio Rivendell, which bills itself as “the one and only fantasy radio station in the world playing fantasy music 24-7.”

The problem with these external soundtracks, some would say, is that the music may not always be in synch with the words on the page. An elven theme inopportunely playing on Radio Rivendell, for example, would sit oddly with a climactic Lord of the Rings battle scene. And not even the most accommodating music soundtrack can provide the ambient soundscape of a peaceful summer morning in the Shire or the crunch of a battle-axe striking home. But there’s an app for that. It’s called Booktrack.

Officially launched in early 2012, Booktrack.com offers “audio-enhanced” versions of works by authors whose works are out of copyright and by professional and amateur contemporary authors. Gaining access to the main part of the website requires pre-registration (which is why I can’t provide live links, unfortunately). Once past the registration hurdle, users can choose from a library of non-narrated e-texts. What makes these texts different from, say, what you might read on a Kindle is that they come with an embedded soundtrack of music, ambient audio, and sound effects that in theory is synched to the reader’s pace.  The Studio option allows writers to score, publish, and sell their own texts, and there is also a part of the site specifically set up for classroom use.

Booktrack’s most energetic champion is popular speculative fiction writer (and independent digital publishing advocate) Hugh Howey, who has blogged about it, contributed a number of his works to the site, and even co-sponsored a Booktrack soundtrack-writing contest. Both Salman Rushdie and Jay McInerney were also introduced with great fanfare just prior to the official launch as the first contributors to a projected twelve-month series of short stories by prominent authors. The rest of the series never materialized, however, and apart 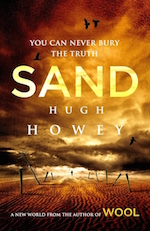 from these three authors, most of what’s on offer in the Booktrack library consists of either public domain texts or works by fledgling or mid-list writers.

The extract from Howey’s Sand and the stories by McInerney and Rushdie were produced by Park Road Post, the Academy Award-winning post-production company for the Lord of the Rings movies. Rushdie’s story also has a specially commissioned musical score played by the New Zealand Symphony Orchestra. If you want to hear what a well-produced “synchronized movie-style” book soundtrack sounds like, these works are the place to start. Very few of the others I sampled came anywhere close to this standard, however. This may be due in part to the fact that the music and sound catalogues are weirdly uneven. Many selections appear to be field recordings that Booktrack acquired free of charge. How else to explain “Penguins’ Footsteps in Snow,” or “Aine [sic] Crane Dance”?  In addition to standard Foley effects — gunshots, footsteps, breaking glass – the sound library includes “Six-week-old baby boy crying (weight 5.3 kg).” Alas, if you want to rock that baby in a cradle on your soundtrack, the closest you can get is the sound of a rocking chair. And that sounds like…a rocking chair.

For lack of more and better options, certain musical themes and sound effects are overused. Others are at best a loose fit with the text. The poorhouse scenes in Oliver Twist, for example, include whooshing wind, a cricket, and what I can only interpret as creaking ship sounds. A number of the fairy tales and period novels begin with birdsong, whether the scene is set outdoors or not. Sense and Sensibility‘s Dashwood sisters are introduced to the strains of Handel’s “Water Music,” not an obvious go-to for evoking Marianne Dashwood’s pianoforte. Sometimes, as when Alice in Wonderland‘s rabbit appears, the sound is simply unidentifiable. Thus, far from creating an immersive experience the soundtracks are obtrusive and distracting. Even a text like Howey’s Sand, with its high production values, had me wondering when the desert noises would fade out and thinking, “cool, I like that coyote.” Besides, I’d rather let my imagination do its thing without being manipulated.

Simply a matter of personal taste, you might say. And yet there are indications that I’m not the only one who finds Booktrack underwhelming. Apart from Hugh Howey, the supply of big-name authors willing to participate seems to have dried up after Rushdie and McInerney. The occasional puff pieces in the media are balanced out by pointed criticism, and – perhaps most telling – Booktrack’s technology has never been adopted by Kindle.

My advice, after a week of auditioning Booktrack, is that your best chances for an immersive reading experience lie elsewhere. Listen to Pandora Radio. Listen to Radio Rivendell. Find an author’s Spotify playlist. Or, if you’re so inclined, you can forget about enhancement altogether and curl up to read in perfect silence.

Now it’s your turn: Do you enjoy listening to music while you read? What are your thoughts on books with soundtracks?

5 thoughts on ““It’s Laudable To Be Audible”: Enhancing the Reading Experience (Or Not)”