“This is it!” I said to my husband. New to Atlanta, we were househunting back in the days when people actually drove around to look at houses. Who knew how many we had seen? There were of course the “impossibles” and the “unaffordables.” But the “maybe’s” were merging into an indistinguishable blur.

My Own Room (Photo: Ann Temkin)

In the case of this particular house, the first and second floors were “fine.” But when we climbed to the third floor, I knew immediately that our search was over. The refinished attic was about 21×15 feet with slanted ceiling. That was already good. But the wall that faced me, with double windows flanked on both sides by built-in bookcases and window seats, called out to me right away. There I was, high up in the trees with books! A perfect sanctuary in the midst of urban excitement and turmoil. High above the trucks and leaf blowers there was quiet. The climb up two flights of stairs made it inaccessible to those with casual needs.

Twenty-five years later it is still my sanctuary and the place where I write, meditate, bring others seeking time and space for reflection. The rest of the house has suited our needs well. But it is this room that always lets me know I never want to move. Still, I feel a little guilty, because even now it feels like such a luxury! Growing up, I knew my father’s study was his sanctuary and I was never to touch anything or enter without permission. But my mother had no such room. 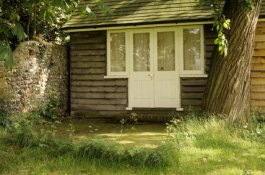 Almost ninety years ago, in October 1928, Virginia Woolf delivered a lecture at Newnham College in Cambridge, England entitled “A Room of One’s Own.” The women who heard her passionate cry that day were still not allowed to graduate from university, and only those with very wealthy parents might have a room of their own.  Woolf proclaimed that “a woman must have money and a room of her own if she is to write fiction.” She was radical. And she had not only a room but a “shed” that her husband had built in their garden at Monk’s House, their country home.

Jane Austen, celebrated by Virginia Woolf in her famous lecture, did not have her own room. She wrote in the family sitting room of Chawton Cottage. Her “desk” was right by the front door, and it was not a desk but a tiny table – the kind used today for a vase or small sculpture.  Her mother and sister sat sewing   and, we can assume, conversing in the same room, and a squeaky door hinge heralded the arrival of guests or family members. The annoying noise was welcomed by Jane, who did not want the hinge fixed since it alerted her to the approach of a family member or guest. She could then to push the tiny pieces of paper on which she wrote under the blotter, move to sit near her mother and sister and pick up her sewing. 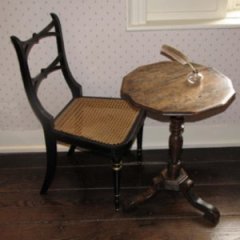 In Austen’s day at least eighty percent of British women were working class, mostly servants of wealthy families, some working on farms or factories. Married women in those pre-birth control days had many children, and cooking and housework were not made easy by modern gadgets. How could they find time to write? They certainly would not have a quiet space to call their own.

Today, defined work weeks, time saving technology, cleaning agents and the like make work less exhausting. Birth control has made an enormous difference in family size, and many women choose neither marriage nor children. On the other hand many women are single parents, grandparents are raising grandchildren, music and other noises pervade the air, cell phones make us available twenty-four/ seven, and children have endless activities requiring parental involvement and transportation. And aren’t women still expected to be available to answer every question, respond to every event in the lives of a family member?

One extraordinary woman of our time is Toni Morrison. A celebrated contemporary author, Morrison was a single parent of two sons, held a full time position as editor at Random House and university teaching responsibilities. She wrote very early in the morning or very late at night. Whether she had her own space or simply worked while everyone else had left the common areas I do not know. She certainly did not have a life that was either quiet or inaccessible to the interruptions and needs of colleagues, students, children.

I wonder how many women now have a room of their own. Google gives information on any topic, right? Googling everything I could think of – women and home offices, women and space in home and on and on – I found virtually nothing. There were lots of articles about when to give a child a room of his or her own. There were articles about the need for man caves. The only information I could find about women’s offices advertised home decorating, and often those spoke of “portable office” that can be moved from room to room or offices for husband and wife.

The Elephant House, one of the cafes in Edinburgh where J.K.Rowling wrote the first Harry Potter book. (lifetonic.co.uk)

I began to think about my friends. There are those who live alone and so obviously have their own space. But the others? Most seemed to have a small desk in a corner of a common room. One writer did tell me that she rearranged her house and turned her son’s game room into a space for herself. (He already had a bedroom.) Another said she had never had a room while the children were growing up – although they did. My interest in this has grown daily. Now I have a question on Facebook. It’s new, but the only response so far is from a woman who says she uses one corner of the couch. I hope to hear from more women.

Question for the Reader: Do you have a room of your own? For writing or whatever? Do you have any space where you can have quiet? Any place that’s not accessible to the world?

15 thoughts on “Please Don’t Interrupt Us”