Standing on the second floor, looking for the third, I saw the up-escalator wasn’t working. Couldn’t find a clerk, so I headed for the moving stairs that were coming down from third. Why should I ask for directions? The last clerk had been rude and insolent – like it was my fault she hadn’t had a break. Well I was tired too: of long lines, messy Christmas displays and grumpy sales-people.

No one was watching. The path was clear. “Carpe Diem!” I thought, launching myself up the down-escalator. This might be fun: a way to work off tension. All I had to do was run faster than the moving stairs, and eventually I’d reach the top. There, in Women’s Lingerie, I hoped to find three nightgowns for my aging mother.

Things went well at first. I quickly hit my stride. The jagged steps rolled toward me, yet I managed to stay ahead. After all I was a walker, logging two miles every day. Not for nothing have I exercised like crazy all these years. Soon I reached the middle of the slope, legs pumping in a steady rhythm, breathing nice and slow. But when I looked up, the vista caught me by surprise: all those steps, their downward motion. And in that moment’s hesitation, I lost altitude. I shook it off and doubled down. Pumped my legs a little harder. Leaning forward, I gripped the rail. And as I did, my shoe flew off. Turning to watch it glide away, I realized the Trickster had seized control.

Puck, Raven, Lucy Ricardo, Odysseus or Sacred Clown – whatever you may call it: there is a certain type of character who likes to “stick it to The Man.” Starring in stories around the world (and dating back almost 3000 years), The Trickster is an archetype – a collection of embodied traits. He seeks to overthrow convention, turning life upon its head. She uses the tools of power against power – especially when those in charge take themselves too seriously. And while the character may not always win, s/he sure puts up a good fight.

A Trickster may be animal, human or supernatural; male, female or both – whatever best conveys a story and suits the times. Though the archetype takes many forms, the forms have common traits: s/he’s an outsider, risk-taker, adept at telling lies, also quite accomplished with disguise. And the Trickster’s actions often cast a light on what is ugly in our world.

In The Talented Mr. Ripley (and four subsequent novels), Tom Ripley values money and social standing. A clever striver, he quickly learns the habits of the leisure class: how they dress, what they know, their spending habits and proclivities. Like all Tricksters, Tom is unconcerned with ethics and morality: if he likes something, he takes it – though the taking might involve a bit of subterfuge. When

about to be exposed as thief or poseur, he responds with creativity: employing every skill from disguise to outright murder. It’s not that Ripley intends to murder. His goal is to live as a member of the upper class. Yet if murder is required to maintain his ruse, Tom doesn’t flinch.

With such a resume, why do readers root for him? The answer brings us to the appeal of all Tricksters: because we dislike Ripley’s enemies – they are snobs; because it takes all of Tom’s skills to achieve this con – we enjoy his resourcefulness; and because having watched as Tom went down the slippery moral slope, we now identify with him.

Brer Rabbit is a Trickster of another sort. The slaves who brought him to this country knew him as a liar and thief. Yet in the American South, enslaved Africans encountered another rabbit in the Cherokee tradition. Due to Indian influence and that of slavery, the African Trickster developed wits and wiles and focused on survival.

Among the best-known Brer Rabbit stories is the tale of Tar Baby. Here the Trickster is almost snared by his enemy, Brer Fox, and uses backward logic to make his escape. Rabbit cries, “Please, Brer Fox, don’t throw me in the briar patch,” when that is exactly where he wants to go. When Fox obliges, we heave a collective sigh. This oppressed Trickster may be more sympathetic, but he gives as well as he gets. The story begins when Brer Rabbit strikes the tar baby in retaliation for its not greeting him. Let’s face it: tricksters are not nice.

Apparently even winged shoes can make your feet sore.

One of Western culture’s oldest archetypes is the Greek god Hermes. His name derives from the word “hermai” – referring to ancient piles of stones that were used to mark boundaries. Thus, Hermes presides over crossroads and all places of transition. Protector of travelers, intercessor between mortal and divine, Hermes is one of very few deities allowed to cross from the land of the living to that of the dead. In his role of messenger and guide the god was also celebrated as an agent of human growth.

Yet Hermes commits his fair share of crimes: within a few hours of birth, he crawls away and begins to explore. Soon he finds and kills a tortoise, turning its shell into a lyre. Later that same day, he steals 50 head of divine cattle, hiding his tracks by shoeing his feet in tree-bark. When the crime is discovered by Apollo, Hermes avoids punishment by teaching his brother how to play the lyre.

One of Hermes’ symbols is the Caduceus – a staff wrapped by two serpents and surmounted by wings. For centuries the image served to represent commerce, eloquence and trickery. Only in the last 100+ years has the symbol come to stand for healing. And – speaking of tricks – that came about via a misunderstanding.

According to Carl Jung (Swiss psychiatrist and psychotherapist), Tricksters act as agents of transformation. When the archetype takes control of our psyche, one viewpoint explodes while another takes shape. The process is often fraught with humiliation. Yet new facts will come to light: like how the world is one way, when we thought it was another. Think Ebenezer Scrooge and his Christmas Spirits.

Speaking of holidays, let’s return to my shoe – At this point, I had a choice: to surrender in defeat or keep muscling upward. With Trickster in charge of my psyche, I wanted to climb. “Faster,” I thought, “keep moving,” but my feet did not respond. Soon my second shoe went the way of the first. I dropped to my knees, still gripping the handrail, and slowly pulled myself up: hand over hand, step over step. 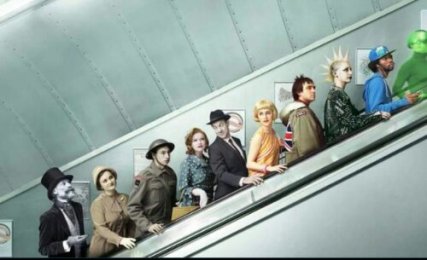 Can you spot the Trickster?

By this time a small crowd had gathered at the top. A worried-looking salesclerk stood in front. Calling, “Hold on! I’ll help you,” he did exactly that – hooked his hands under my arms and pulled me up. As he did, my ankles felt the painful scrape of corrugated metal. And in this bungling way I finally arrived. The waiting crowd erupted with polite applause, then – as if to protect my privacy – quickly dispersed. As it did, I caught sight of several name tags. My audience had all been clerks.

The rescuer helped me to my (bare) feet. “Are you all right?” He slightly shook his head. “We watched you running up those stairs. Nice work,” he raised an eyebrow, “but dangerous. There was supposed to be a sign pointing to the elevator. We’re so sorry you got stuck.”

Panting with shame and exhaustion, I mumbled my thanks.

It was hard to sit down gracefully since my knees were weak. Instead I sort of crumpled in a heap.

I nodded, breathing heavily and feeling quite abashed. It was only after Foster left, I realized: anger at clerks had launched me up the down-escalator. But maybe not all clerks were rude. Perhaps I needed to rethink this Christmas-shopping thing.

Now we’d like to hear from you, either your comment or your thoughts on this question:  Who is your favorite Trickster?

7 thoughts on “The Trickster, Three Nightgowns and an Escalator”