From adolescent non-reader to adult writer of crime thrillers, the story of award-winning author Amanda Kyle Williams is as inspiring as it is surprising. Throw in surviving a chemical addiction and endometrial cancer, and it becomes nothing short of miraculous. If you ask Williams how it happened, she’ll tell you it can only be explained as a series of gifts from the universe that she desperately grabbed onto. If pressed, she quietly acknowledges the role her own strength and determination have played.

At age 22, after a childhood school life of hiding her struggles with reading, dropping out of high school, and doing some “dumb shit” (her words), Williams’s turning point came when she discovered that her condition had a name–dyslexia–and that she could indeed be taught to read, given the right approach. In her case, that was the Orton Gillingham method, a phonics-based multi-sensory reading program for people who learn differently, developed by researchers at Columbia University.

And learn to read she did. Within a year she was reading the novels of Jane Austen, sophisticated texts by any standard. “I call it the hell of Jane Austen,” said Williams, “because it was so hard. I didn’t know until later that Austen is difficult even for good readers. The first one, Pride and Prejudice, took me three and a half months to read. About half-way through I started to find the rhythm and music in Austen’s writing that I had only heard in spoken language. Once I got it, I fell in love with it, and with the idea that people read for pleasure. I had been at war with words until then.”

After a few years of searching for books she enjoyed reading, Williams discovered the thrillers of Robert Ludlum, her first taste of suspense fiction. Ludlum was explosive for her. She ended up reading 14 of his books in a row, following up with the spy novels of John le Carre and the crime fiction of Robert Parker. Eventually, she began to wonder if she could give writing a shot.

She contracted with a small press to write four books, about which she says, “I would love if they’d go away, but they’re still out there, God bless the internet. Writing takes time, and I did it badly for fifteen years. I couldn’t find my slot. Nothing was speaking to me, until I discovered Thomas Harris’s Red Dragon and The Silence of the Lambs. They were the scariest books I’d ever read in my life, and they sparked it for me.”

She became interested in the work of criminal investigative analysts and took courses to learn more. For further research, she became a registered process server with an Atlanta PI firm, a job that included delivering court subpoenas and doing some surveillance. “That work informed my writing more than anything I’ve done,” said Williams. “I learned the layout of Atlanta, and I learned how and where people hide when they don’t want to be found.”

Fast-forward a few years. Supporting herself with three jobs, including a dog-walking business that consumed a lot of time, Williams took six years to write the first “Stranger” manuscript, but only two weeks to find an agent, the first one she approached. Now published by Random House, her books are categorized as crime thrillers, but they are much more than that. Keye Street, the gritty Chinese-American protagonist, is a female private investigator with baggage. She is made of good stuff that keeps readers reading for her surprising mix of softness and hardness at the right times and places, all messily contained in one smart detective who uses her intelligence, her toughness, her kindness, her insecurities, her backstory of addiction, and her sixth sense about human nature to rid Atlanta streets of dangerous killers. She’s no-nonsense yet compassionate, forceful yet respectful, keen-witted but understated.  You can’t read a Keye Street novel without wanting to be more like her. As Williams puts it, “In some ways she’s the best of me, in some ways the worst.” 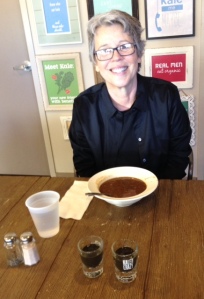 Williams’s novels are infused with so much heart and humanity that their horrific crimes and blue language won’t prevent readers from being drawn into the stories, all of which have the word “Stranger” in the titles and a single eye peering from the covers. The Stranger You Seek, The Stranger in the Room, and Don’t Talk to Strangers, released respectively in 2012, 2013, and 2015, are  only the first three in what fans can hope will be a long series. The fourth, A Complete Stranger, is in progress.

One of the charms of the series for Atlanta readers is the regular mention of memorable Atlanta landmarks, like The Fox Theater, The Georgian Terrace, Southern Sweets, Krispy Kreme Doughnuts, The Flying Biscuit Cafe. Williams said she likes to give them a little bump because they’re so good. That brings us to Kale Me Crazy, in Decatur, GA, where I caught up with her to ask a few questions. After seeing the response to Williams’s Facebook posts about our meeting place, I predict it will show up in a future Keye Street mystery.

Understated humor is a hallmark of your writing, especially in the dialogue. Do you work deliberately for this humor, or does it come naturally?

“I grew up in a funny family. Plus, as a kid told by the system that she wasn’t smart enough, humor was a way to gain control, so I learned to be funny. But I didn’t know I could write funny until I started writing Keye, until she formed as a character. Now I use humor to break tension when dealing with serious subject matter. I like the creepy stuff, and it needs the comedy to break it up along the way.”

What inspires you to go to your desk and write?

“Great writing inspires me always. The best writing workshop is on the shelf at the bookstore. Reading a great writer can tackle inspiration issues, structural problems, technical details, and characterization. It’s like going to a university for free. If I’m ever really stuck, I read. It works.”

What is your daily writing process?

“As far as I know now, my process is about wandering aimlessly for a few hours in the morning. I take care of the dogs. I take care of my chores. I make up chores. I have to clear the deck completely. Just the idea that something is waiting for me or needs to be done will derail me. When everything is as still and calm as I can get it, hopefully sometime after lunch, and I’ve wandered around for another hour worrying and thinking I’m the worst writer in the world and can’t possibly do this, then I force myself to sit down and struggle at my desk, and it’s torture. If you sit there long enough, piecing together your framework kind of brick by brick, finally something happens. That’s when inspiration comes, after I’ve been working for a while, and then I work until my eyes burn, usually some time after dark. It’s my dream job, and it torments me every day of my life.”

You’ve been candid about your struggles with dyslexia, drug addiction, and cancer.  Has it been difficult to share those parts of your life?

“It was all part of the healing process for me. I hope my story can inspire someone. I did the photo essay, “Bald,” after my third chemo treatment, because losing your hair is such an emotional thing for men and women.  I just wanted someone to see that it doesn’t have to be ugly.”

How do you characterize your remarkable journey, given the challenges you had to tackle to become a successful writer?

“It’s not a small thing for me, coming from where I came from. The most remarkable thing, when you look back on my journey so far, is that it’s been littered with opportunities. The universe keeps giving to me, and I always land on my feet. But you have to be willing to dig for buried treasure. That’s how I got through cancer. The other options weren’t okay for me. Not being able to read was not okay. Not being able to support myself was not okay. Not living through cancer was not okay. You have to set your mind to finding the gold. And it’s there. It’s always there.”

What is your favorite crime series and the city it brings to life?