This amazing memoir begins with tragedy—Ficre Ghebreyesus, husband of renowned poet Elizabeth Alexander, dies suddenly of a massive heart attack while on a treadmill at their home just four days after his 50th birthday party.  Although it may be categorized as a “grief memoir,” Light of the World is not a book that dwells solely on the actual death, but rather celebrates the absolute and deep love that leads up to this point and continues past it. Alexander has written this book for their sons, Solomon, 17, and Simon, 15. As poet and friend Terrance Hayes writes:  “The book is an elegy, with the quality of a fable so the boys would be able to grasp the richness of their relationship.” 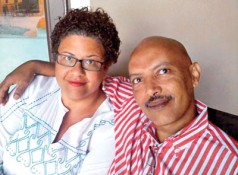 To begin, you must understand the incredible serendipity of these two people ever meeting and falling in love—two people from such different cultures and backgrounds—it seems an impossibility.  Elizabeth Alexander, poet, Yale professor—Ficre Ghebreyesus, Eritrean refugee, chef and painter.  They were born in the same year 6,000 miles apart— and met 34 years later. From that first moment in New Haven, Connecticut, in 1996, each knew that they had found their life partner.  Within a week, they decided to marry and started sharing not only love for each other but love for creativity and learning.  Their two sons were born in quick succession, and as Alexander puts it:  “Every beautiful day we lived, every single beautiful day.”

Ghebreyesus would work all day at his Eritrean restaurant in New Haven, then retire to his small apartment to paint all night.  He loved experimenting with color and form in his artwork, then creating something interesting with flavors when cooking—the book is filled with his recipes and memories of guests and enjoyment of wonderful food.  He was a generous, giving, intelligent man, always opening his home and heart to others, enriching many lives.  For example, after his wife called to say she was bringing home an unexpected visitor, she arrived to find  “the house . . . lit and glowing.  The kettle is hot and tea is brewing in the black Japanese cast-iron pot.  Ficre has put raw almonds in a small, celadon bowl.” There was such an elegance to the way he lived his life.  Alexander sums up the things that made him special:

He who believed in the lottery

He who did not leave a large carbon footprint

He who never met a child he didn’t like

He who loved to wear the color pink

He whose children made him laugh until he cried

He who never told a lie

He who majored in physics, who knew the laws of the universe

He who wanted to win the lottery for me

When Alexander went to the apartment following his death, she found 882 paintings that had never been sold, and she had them digitized.  The painting called “Solitary Boat in Red and Blue” is the one she chose for the cover of the memoir because, she says, “He was a bottomless boat and the boat that would always hold me.”

Author James McBride comments:  “This is a gorgeous love story, written by one of America’s greatest contemporary poets.  Graceful in its simplicity…this book is proof that…true love exists, and where it does exist, it graces the world—and us—with light and hope.” 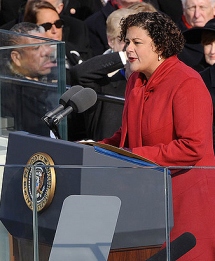 Alexander has achieved great acclaim as a poet and teacher.  She has written six books of poetry, including American Sublime, a finalist for the Pulitzer Prize.  Today, she is the Thomas E. Donnelley Professor of African American Studies at Yale University. She is one of only five poets invited to compose a poem for a Presidential inauguration. In 2009, at Barack Obama’s first inauguration, she recited “Praise Song for the Day,” excerpted below:

Each day we go about our business,

eyes or not, about to speak or speaking.

noise and bramble, thorn and din, each

one of our ancestors on our tongues. . .

Some live by love thy neighbor as thyself,

others by first do no harm or take no more

any thing can be made, any sentence begun.

On the brink, on the brim, on the cusp,

praise song for walking forward in that light.

Alexander had what most would say was an enviable marriage—one built on profound love and creativity, and her memoir of their 16 years together is an apt tribute to this special man who shared

her life.  I had the good fortune to attend a reading of this memoir at the 2015 Decatur Book Festival and came away touched and impressed.  Like Alexander, I have personal knowledge of the death of a husband at an early age, as my husband also died at age 50.  Her book is like no other I have ever read on the grieving process because it is more about the love these two people shared—not an emphasis on the dying, but the living.   It is a special gift to all of us who share the loss of those closest to us. Alexander and I spoke briefly as she signed her book for me. In it, she wrote:

What poet speaks directly to you and your life?

9 thoughts on “Light of the World: A Memoir of Loss and Continuing Love”