Last week, I speculated about possible tension between Louisa May Alcott and Harriett Lothrop (“Margaret Sidney”), who, along with Nathaniel Hawthorne, lived in The Wayside in Concord, Massachusetts during the nineteenth and early twentieth centuries. In the week between that first post and this, I was delighted to discover a book by Patricia West, Domesticating History: The Political Origins of America’s House Museums, which supports my suspicion that – as West puts it – “there are indications that Lothrop was not a particular fan of Alcott.” Because West’s focus is on the creation of Orchard House as an Alcott museum after Louisa’s death, she has little to say about how Alcott and her surviving kin might have viewed Lothrop in return. Me, I’m willing to bet that the antipathy was mutual.

Whose side are you on? The Hawthorne Connection

Like many memoirists, Harriet Lothrop’s daughter Margaret was inclined to omit or gloss over details that might be unflattering, distressing, or inconvenient to report. For example, though Nathaniel Hawthorne’s son Julian was found guilty in 1913 of selling shares in nonexistent silver mines and served time in a federal penitentiary, Lothrop’s 1940 book about The Wayside betrays nary a hint of his unsavory past. More significant is the misleading impression she gives of the interaction between the Hawthornes and their Alcott neighbors next door at Orchard House as friendly, even intimate. This was evidently true of relations between the Alcott and Hawthorne women and children, but the relationship between Bronson Alcott and Nathaniel Hawthorne was more problematic.

Bronson Alcott’s diaries from the early 1860s record, first, his attempts to draw the reclusive Hawthorne into friendship and then his growing disenchantment with his next-door neighbor. For his part, Hawthorne seems to have regarded Alcott at times as an impractical visionary and at other times as a crank. Consider this piece of doggerel he wrote about his vegan neighbor,

…Whose dinner never made him plump;

Give him carrots potatoes, squash, parsnips, and peas,

And some boiled macaroni, without any cheese,

And a plate of raw apples, to hold on his knees,

And a glass of sweet cider, to wash down all these–

Two years after Hawthorne’s death in 1864, Bronson Alcott put together a lecture series on New England celebrities that included an unflattering portrayal of Hawthorne. In 1872 he elaborated on this view in Concord Days. I have no evidence of an outright rift between the Alcotts and the Hawthornes, but certainly the relationship between the two families from the mid-1860s onward must have been complicated. Perhaps Daniel and Harriett Lothrop’s avowed passion for Nathaniel Hawthorne and their “feeling of special friendliness” toward the surviving members of his family alienated them from those Alcotts who still lived in Concord. If so, it’s hardly something that Margaret Lothrop would have wished to report.

Family politics aside, the Alcotts would have had another excellent reason to shun Harriett Lothrop: her first book about the Five Little Peppers is, to put it crudely, a rip-off of the first half of Little Women – and a poorly executed one, at that. Both stories center on a family in reduced circumstances headed by a wise, self-sacrificing mother. Both the Peppers and the Marches are befriended by wealthy, formidable old gentlemen whose households also include a friendly, energetic, motherless boy who longs for companionship. Little Women’s Mr. Laurence invites music-lover Beth March to use his grand piano and then gives her a piano of her own, while The Five Little Peppers‘ Mr. King provides music-loving Polly Pepper with both a piano and a piano teacher. Amy March is a talented artist, and so is Ben Pepper. Both rich old gentlemen become less curmudgeonly after meeting the poor families and are ultimately drawn into their family circles – though with this difference, that whereas in Little Women the Laurences remain at a respectful distance from the Marches and allow them to keep their autonomy, in The Five Little Peppers Mr. King absorbs the Pepper family, amoeba-fashion, into his own.

Did Harriett Lothrop deliberately adapt Louisa May Alcott’s characters and plot to her own use? She must have read Little Women, which became a literary sensation when she was in her mid-twenties. The kindest interpretation would be to say that Lothrop internalized Alcott’s work to such an extent that she 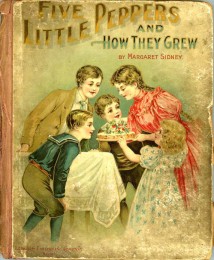 was unaware of its connection to her own, though her oft-repeated insistence that the Peppers and their little brown house emerged from her imagination in childhood suggests she felt the need to distance herself from Alcott’s creations.  She certainly never acknowledged any debt to Alcott. Whether Alcott herself actually read Five Little Peppers and How They Grew, she was surely aware of the book, particularly in light of its best-seller status in 1880. One can only imagine her reaction to the wild success of a book whose similarity to her own was plain for all to see. Patricia West quotes an observation made shortly after Harriett Lothrop’s death that she was “simply a vulgar duplicate of Miss Alcott.” Perhaps Miss Alcott herself, her sister, and her nephews shared this view.

Life with the Peppers is a never-ending series of dramas, their dialogue delivered in screams and shrieks and every third remark punctuated with an exclamation point. Yet the family’s destitution seems to be at most a nuisance, not a life-or-death struggle. The impoverished Peppers stay rosy, bumptious, and healthy on a diet consisting mainly of bread and potatoes and the occasional gift of candy from benevolent neighbors.  The loss of Ben and Polly’s support while they recuperate from the measles doesn’t appear to affect the family economy. Once the Peppers are ensconced in the Kings’ mansion, both they and their rich friend Jasper look back nostalgically on the never-ending fun they had in “the very nicest place in the whole world.”

The Marches’ poverty in Little Women is far more convincing, because Louisa May Alcott knew firsthand what it was like to be poor. (In fact, the Alcotts’ real-life privations were at times far worse than the Marches’. In this respect, the present-day appearance of The Wayside is misleading, since it is far larger and in far better repair now than it was when the Alcotts lived there.) And while the March family’s

impoverishment drives the plot of Little Women, they are not so different from the Laurences in social standing that their friendship with Laurie and his rich grandfather beggars belief. By contrast, the enormous gulf between the Peppers and the Kings makes nearly all of their interactions laughably implausible. Snobbish Mr. King freely allows his son to consort with the barefoot children of Badgertown and in short order becomes infatuated with them himself, to a disturbing degree (spoiler alert: in a sequel Phronsie is still sitting on Mr. King’s lap when she’s twenty). Jasper King eagerly shares the jolly poverty of the Pepper family, but also patronizes them by staging a lavish Christmas celebration in the little brown house that eclipses Polly and Ben’s efforts to contrive a simple celebration for their younger siblings. Mr. King treats Mrs. Pepper with courtly deference and yet puts her to work as his housekeeper, a position she retains throughout the sequels, even though she is miraculously revealed at the end of the first book as the cousin of Mr. King’s son-in-law.

Here’s one further reason why Louisa May Alcott might have disdained the creator of the Five Little Peppers. Harriett Lothrop and her publisher-husband Daniel’s approach to children’s literature was a mixture of deadly sincerity and saccharine sentimentality, a toxic combination that can be seen in Daniel Lothrop’s magazines for children as well as in the Peppers books themselves. True, this was characteristic of the era – but it stands in striking contrast to the views of Alcott, who wrote in one journal entry that she was “tired of providing moral pap for the young.” There is no sign that Alcott, like both Lothrops, felt a sacred duty to entertain, uplift, and educate the young, or that, like Harriet, she took any pleasure in writing for children beyond the satisfaction of providing for her family.

Louisa May Alcott had ample reason to resent the appearance of Harriett Lothrop more or less on her doorstep: a woman to whom everything seemed to come easily, whose sappy, insubstantial writing was imbued with a self-righteous sense of moral obligation to the young not shared by Alcott herself; an author whose blockbuster first novel appeared to be cribbed from Louisa’s, and in its portrayal of poverty seemed to trivialize the painful struggles the Alcotts had endured for decades. Whether Louisa would have gone so far as to cut the Lothrops socially is impossible to say, although she was famously hot-tempered and moody. According to one of her contemporaries, she was “a creature loving and spiteful. … [N]o one could be jollier and more entertaining when geniality was in ascendancy, but if the opposite, let her best friend beware.” Maybe Harriett attempted to add Louisa to her collection of literary friends and caught her in a spiteful mood. For all her father’s wealth and her husband’s literary connections, Lothrop was a parvenu in the Concord society she wanted so much to enter – the very society in which the Alcotts were to the manner born. To be rejected by Louisa would have stung indeed. On the other hand, perhaps she was so self-conscious about her derivative novel that she never even tried to be on good terms with the Alcotts. After all, there’s a certain cachet to a literary feud, and as a Hawthorne-worshipper Lothrop might have taken the position that she simply could not tolerate his ill-treatment by that dreadful Mr. Alcott.

Most of this, I freely admit, is sheer speculation with very little evidence to back it up. It may take me years to find anything more substantial in the reams that have been written by and about both women. Watch this space, though. I’m still looking.

What literary mystery do you wish you could solve?