Something there is about the grace and charm of a fountain pen that attracts a writer’s fancy. The efficiency of a keyboard can’t be denied, but occasionally a fountain pen is the instrument I want for journaling or for the first draft of a difficult writing assignment. A fountain pen slows the hand to match early thinking processes in a way that rapid-fire typing cannot. The most endearing feature for me is that

fountain pens inspire attraction to, not avoidance of, a blank page. On the other hand, they are not so practical for carrying around in one’s purse, due to the risk of loss or leakage. I never carry them away from my desk. Not since that time on the airplane when the cabin pressure dropped.

In truth, I’m more in love with the idea of having fountain pens than of using them. But I’m small-scale. Real collectors often boast hundreds or even thousands of pens and invest huge sums of money in a single purchase. I once heard of a man who spent $46,000 on a pen as a gift to his lover. I own only seven, and they’re relatively inexpensive. Still, I like everything about them—the way they look, smell, and feel in my hand—the shape of the nibs, the taper of the barrels, the sheen of the finish, their heft and balance compared to other kinds of pens. I think they improve my handwriting by the grab of the nib on paper, but even if that’s a fantasy, I love the faint earthy sound and sense of the scratch. Filling a fountain pen with a piston converter is a ritualistic act of pleasure as is dipping the nib in the ink bottle and tapping it against the neck to prevent drips. The different ways the caps engage, whether by snap, screw, tiny pressured twist, or even a magnet, are nothing short of intriguing.

Then there’s the fun of the accessories, like the gentle rock of my hand-held ink blotter, though I rarely use that either. And don’t get me started on the romance of seeing a variety of ink bottles on a desk, perusing the rich colors, or twisting off the lids to smell the inks. One might compare it to sniffing fine wine. I even like the sleek wooden box that holds the pens in vertical position with nibs pointing up, to 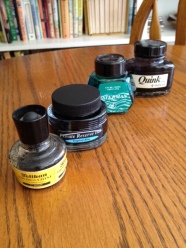 avoid clogging. This is especially important for pens that aren’t used often, but it’s also a nice look on a desk. Nothing entices me to a blank page better than an array of glossy upright fountain pens from which to choose.

You might call it fountain pen envy. I almost drool when I walk into Atlanta’s famous Artlite pen store to try out the more elegant models and learn about new features from the experts. Not being able to afford most of them increases the drool response. But once, in 2007, as a retirement gift to myself, I did splurge on a Japanese Sailor. With a sterling silver barrel and a 21-karat gold music nib, the  $215 price tag made it the most valuable pen in my collection, but I rarely write with it, having been lured more by its beauty than by function. I didn’t know then that a music nib is designed for writing notes on a musical staff, that it releases more ink in a broader line than I want. It can make a thin line if held at a strict 90-degree angle to the paper, but that requires practice. Skilled calligraphers can use it to make ornamental letters, an art form I admire but have not mastered. Yet.

Lovers and collectors of fountain pens are an eccentric lot. I didn’t really know how eccentric until I began researching their blogs and websites. They’re nerdy, bookish, and quirky. They spend a great deal of time making peculiar YouTube videos on the art of using, buying, trading, and collecting their favored writing instruments, both vintage and modern.

More often than not, they are male. I couldn’t find a single blog on fountain pens written by a woman. If you know of one, I’d love the link. Surely there are some. Most companies make pens in sizes suited to the hands of both women and men, so I can’t be such an oddity.

Anne Frank, Jane Austen, Louisa May Alcott, and Virginia Woolf all wrote with fountain pens, but of course, in their time it was a necessity, not a choice. Famously, some present-day celebrities still use

fountain pens, like Stephen King, Neil Gaiman, and Sylvester Stallone. Again, all male. It is said that J.K. Rowling wrote her first drafts by hand with a pen, but I couldn’t confirm what kind.

My own interest started over forty years ago when I learned to prefer the wet ink in roller balls to the sticky stuff in ballpoints that globs up on the side of the tip. Soon, I graduated to Sheaffer fountains from the college bookstore, under $10 a pair. They were the lightweight cartridge style that I don’t like now, but I can’t discard them due to their nostalgic value. I currently carry wet-inked roller balls for daily use, and had used them exclusively until I received my first fountain pen of quality, a Waterman, as a gift from my husband in the year 2000. It has a sleek gray marbled barrel trimmed with gold bands and is the perfect size and heft for a woman’s hand. It was my first piston converter (filler), and I was instantly hooked. Today, if I ever come across a ballpoint pen in my house, I toss it in the trash.

Since the Waterman, I’ve added a Montblanc with a fine stainless steel nib and tight grab, a Japanese Sailor referenced above, a heavy Chinese Duke with a broad nib and smooth grab that I bought in a pen store to die for in Shanghai in 2008, and in 2010, from the Levenger catalog, the pen I use most often. Monogrammed in gold on a green marble celluloid barrel, the Levenger True Writer features a gold nib with fine steel tip, gentle glide, uniform distribution of ink, and exquisite balance, even when the cap is lightly pressure-twisted onto the back.  Admit it. You want one.