As Shakespeare wrote in Romeo and Juliet, “What’s in a name?” Call it a journal, as C. S. Lewis did, or a diary, as did Virginia Woolf, they are one and the same. Many creative people keep them, especially writers. Journals chronicle innumerable things—often explorative insights into the authors’ private lives and relationships. Sometime they contain jokes, descriptions, and quotes as David Sedaris’s does. Mark Twain penned ideas for outlandish character names in his.

Anne Frank and her sister Margot at the beach on holiday. (cnn.com) Click to enlarge.

Anne Frank recorded history, as did Samuel Pepys, who has been called the greatest diarist of all time. His accurate account of the English Restoration period is considered one of the most important. He also wrote a fascinating narrative of the Great London Fire of 1666. Yet despite historical events, Pepys penned, often humorously, life’s mundane happenings. For instance, one entry reads:

Sunday 28 April 1661: After supper my father told me of an odd passage the other night in bed between my mother and him, and she would not let him come to bed to her out of jealousy of him and an ugly wench that lived there lately, the most ill-favoured slut that ever I saw in my life, which I was ashamed to hear that my mother should be become such a fool, and my father bid me to take notice of it to my mother, and to make peace between him and her. All which do trouble me very much. So to bed to my wife.

Nathaniel Hawthorne and his wife, Sophie Peabody, kept a joint diary often creating a running dialog. Their joint writing waned with the birth of children. Later, it was a family affair with the children adding their own scribbles, pictures, and even a short story, written by eight-year-old daughter Una. Unlike the Hawthornes’,  Franz Kafka’s writings recorded his dreams, pictured his isolation and depression—not written to be made public, but used to get his creative juices flowing.

Virginia Woolf said, “… my belief that the habit of writing thus for my own eye only is good practice. It loosens the ligaments.”

And Susan Sontag stated, “… Superficial to understand the journal as just a receptacle for one’s private, secret thoughts — like a confidante who is deaf, dumb and illiterate ….”

Anais Nin and her diaries in a bank vault (oocities.org)

A prolific diarist was Anais Nin. She began keeping diaries from the ripe old age of eleven and continued until her death. The diary was her best friend—a vice and a drug—her opium pipe. Her mother, therapists, and friend Henry Miller all tried to break her of the addiction, to no avail. For more than thirty years, Nin tried, unsuccessfully, to have her 15,000 typewritten pages published. Finally, in 1966, the first volume, for the years 1931-1934, was issued. To date, fifteen are in print. The last four, called “expurgated” editions, are more candid and sexual than the earlier ones and were introduced by Nin’s widower and second husband, Robert Pole (although not legally married). Nin was a bigamist, having husbands on opposite coasts.

Like Nin, Sylvia Plath started journaling at age eleven until her suicide at age forty-four.  In the Unabridged Journals of Sylvia Plath, she wrote, “It’s hopeless to ‘get life’ if you don’t keep notebooks.” Two of those notebooks vanished after her death. One never to be found, while Ted Hughes, Plath’s husband, admitted to burning the other. He writes, “I destroyed [the last of her journals] because I did not want her children to have to read it (in those days I regarded forgetfulness as an essential part of survival).”

Another journal burner, trying to avoid scandal and save Lord Byron’s reputation, was John Murray, the author’s publisher. Byron, at his death, delegated his diaries, filled with writings of illicit love affairs, illegitimate children, and a relationship with his half-sister, Augusta, to Thomas Moore. He, in turn, passed them on to Murray, who, with protests from Moore and some of Lord Byron’s friends, disposed of the writings.

Donatien Alphonse Francois, better known as the Marquis de Sade, the scandalous libertine, wrote from the insane asylum and prisons where he spent more than half his life. At his death, in 1814, his son ordered the lengthy manuscripts of sexual extremism to be thrown into the fireplace. Sade was disowned by his family at his death, and it wasn’t until 1940 that his descendants learned they were related to him. Until that time, the family name of Sade had ceased being used, was not claimed as belonging to their family, and the Marquis title, first used by the author’s grandfather, Gaspard Francoise de Sade, was abolished. After the relationship came to light, a plethora of the Marquis’ papers were found hidden in the family chateau. Since then, scholars have worked for decades readying them for publication. Today, the Marquis title and the Sade name have proudly been restored. At the end of 2014, several celebrations in Paris took place celebrating the 200th anniversary of the Marquis de Sade’s death. An amazing exhibit at The Museum of Letters and Manuscripts in Paris was of the thirty-nine foot  parchment scroll, written in thirty-seven days called Les 120 Journées de Sodom or The 120 Days of Sodom. The scroll was found hidden between two stones when the Bastille was stormed during the French Revolution and has since gone through many owners. At present, the manuscript belongs to a French manuscript dealer. 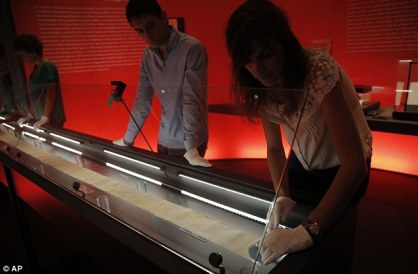 The original scroll on which the Marquis de Sade wrote the draft of his novel ‘The 120 Days of Sodom’
(dailymail.co.uk)

Unlike the Marquis’ journals of sadism, others speak of pure love such as Dante’s. His journals brim with unrequited love for Beatrice, whom he adored throughout his life, despite her being married to another. After Beatrice’s death and Dante’s marriage, he continued to compose poems in adoration of her, a collection now known as La Vita Nuova.

Not only heterosexual but homosexual love has been recorded. One of the most interesting was Anne Lister, of Shibden Hall, a Yorkshire landowner and lesbian. Known as Fred or Gentleman Jack, Lister was not an author per se, but a diarist, mountaineer, and traveler. Between 1806 and 1840, she wrote of daily, economic, political, and social events, and of living openly as a lesbian. Writing in a devised code, a combination of algebra and ancient Greek, she gave graphic and full accounts of her feelings, harassments, affairs, and seduction methods. After her death, John Lister, the last family member of Shibden Hall, with friend Arthur Burrell, broke the code. Burrell urged Lister to burn the journals. Instead, he hid them in Shibden’s walls.  Today, the United Kingdom’s Gender Studies and Women’s History at the University of Lancaster continues to be shaped by Lister’s unprecedented accounts.

What a person writes, even if he is not the one with pen in hand, is as unique as the author.  An example: Andy Warhol had his secretary Pat Hackett compose his diary. For eleven years, he phoned Hackett and told about his day, parties attended, friends and foes—he knew all the rich and famous and always had something to say about them, whether good or bad. The Andy Warhol Diaries, published in 2014 and edited by Hackett, was printed posthumously.

Unlike Warhol, Henry David Thoreau always had his notebook in hand and wrote around seven thousand pages—two million words—forty-seven manuscript volumes. Found in his capacious accounts were experimental types of writing, bizarre characters and stories, humorous and often thought-provoking subjects, his beliefs on civil disobedience, and assessments of the everyday environment. For over two years, he lived in a cabin at Walden Pond, reflecting and writing on the four seasons and his changing self. Then, after ten years of editing his notes and writing eight drafts, he turned it into a one year account called Walden; or, Life in the Woods—considered to be his finest prose. All his journals, though little known, were published in 1906—the first time for an American author. Thoreau’s original manuscripts are housed in the Morgan Library and Museum in New York City.

Like Thoreau, Oscar Wilde’s diary traveled with him everywhere he went. “One should always have something sensational to read in the train” he said. But Ray Bradbury differed on keeping a journal. “As soon as I get an idea, I write a short story, or I start a novel, or I do a poem. So I have no need for a notebook.”

Whether it’s called a journal or a diary, the reason for keeping one can be summed up in the words of Joan Didion:

The impulse to write things down is a peculiarly compulsive one, inexplicable to those who do not share it …

For those of you who keep journals, and to you who might, would you write in them differently if you thought they might be read and/or published someday? If you didn’t record your true self and feelings, what would be your reason to maintain a journal, and what would you record?