In the film adaptation of Michael Chabon’s book Wonder Boys, a creative writing professor quips about a budding student of his who has just been taken into police custody: “Between you and Officer Krupke, he can be the next Jean Genet. It’s been a long time since someone wrote a really good book in jail.”

I admit it. I was late to the game. I just read Orange is the New Black a few months ago. Having watched the series, I was  a bit surprised at how much the book differed from the show, with its near total lack of crazy antics. One of the things that author Piper Kerman focused on was how crucial writing was to her sanity and her ability to adapt to life in prison. For how many other authors of books written in prison is that true? How many authors have used their prison experiences as fodder for their writing, and how many have used their vast expanses of free time to write about things outside the walls?

When stationed in France as an enlisted U.S. soldier during World War I, E. E. Cummings was arrested, along with a soldier friend of his, and imprisoned for four months. The cause of his arrest and imprisonment was unknown to him at the time. Apparently, his friend was writing and mailing politically inflammatory letters back to the U.S., so the French government interned them both in labor camps. Cummings’ family was initially (and presumably mistakenly) sent a letter informing them he was dead, then another letter came, this one saying he was alive, but missing. Out of this experience, Cummings wrote his first novel, The Enormous Room.

Given up for adoption when he was still an infant,  Jean Genet lived and prowled for years in the Paris underworld. A notorious thief, he was convicted at least ten times in French courts for stealing, at which point he was sentenced to life imprisonment. Although his sentence was later commuted, during its early years, he wrote his first published work, Our Lady of the Flowers. The novel tells, in non-chronological order, the story of an infamous Paris drag queen, Divine, and her eventual demise. A groundbreaking work in gay literature, Genet’s novel also deals explicitly with his attempts to occupy his time in prison. 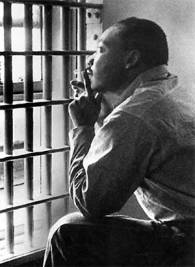 For other writers, prison provided a different platform: Martin Luther King, Jr.’s  “Letter from Birmingham Jail,” Henry David Thoreau’s Civil Disobedience, and Oscar Wilde’s De Profundis are some examples. Civil Disobedience may stand apart from the rest of these works, because after all, Thoreau  spent only one night in prison, inspirational though it may have proved.

In some cases, like that of Genet and of the Marquis de Sade, writing during their imprisonment was forbidden. Genet had a reasonable draft of Our Lady of the Flowers, written on the brown paper given prisoners to construct bags. (This was work assigned to prisoners during their incarceration). Instead, Genet would secret these bags away and scribble on them, until his stash of writing was discovered, confiscated, and destroyed by a prison guard, forcing him to begin again.

More recently, Piper Kerman’s prison memoir Orange is the New Black created a pop culture maelstrom, spawning the enormously popular Netflix series of the same name. Kerman’s book differs from the rest of the group in some significant ways. The first, and perhaps most obvious, is that Kerman is a female author. Nearly all the other “prison books” are by men, unsurprisingly given the number of male prisoners compared to female ones, especially in bygone eras. While some of these books are fiction, some fictionalized autobiography, and some straight memoir, most express sorrow and self-pity, without demonstrating much narratively, that points to remorse.

Orange is the New Black, however, is full of Kerman’s ownership of her misdeeds. Her story, for those only familiar with the TV series, or living in a cave, is that, just out of Smith College, she became romantically involved with a woman who participated in an international drug trafficking ring. Before long, Kerman was caught up in the operation as well. Then they broke up, Kerman moved, got a job, and eventually a fiancé. Several years passed. One day the FBI showed up at her apartment to arrest her for her youthful, albeit serious, indiscretions. After spending two years under observation and awaiting trial and sentencing, Kerman was sentenced to over a year at Danbury’s minimum correctional facility.

At several points in the book, Kerman discusses how letters she received, as well as her own writing, both eased her sentence and helped maintain her sanity. For most other authors of prison books, this also seems to hold true. Perhaps the nature of imprisonment is such that it creates or encourages writers where there weren’t ones before.

So what do you think: are writers born or made?

6 thoughts on “One Sentence at a Time: A Brief Review of Prison Writings”