Alcée Fortier doesn’t get it.

He’s spent decades listening, absorbing, and translating a vast collection of stories recounted by the humans living in and around the great estate of Le Petit Versailles built by his grandfather – the first to refine sugar in Louisiana – Valcour Aimé.

It is a strange fact that the old negroes do not like to relate those tales with which they enchanted their little masters before the war. It is with great trouble that I succeeded in getting the following stories. (Fortier, xv)

Shove that morsel in your pocket, Dear Reader, and follow the spirit of “readers unbound” with me to meditate on a series of stories told three ways. I came across these books in the Mildred H. Latter library, an historic building overlooking St. Charles Avenue. The books – Louisiana Folktales: Lupin, Bouki, and Other Creole Stories by Alcée Fortier, Folk Tales from French Louisiana by Corinne L. Saucier, and Creole Folktales by Patrick Chamoiseau – are from 1894, 1962, and 1988, respectively. The Fortier book was the most recently reprinted in 2011.

I didn’t read them chronologically, but wove between them sampling their overlaps and differences. It was a two-week banquet of gritty, otherworldly adventure populated by animals, vagabonds, everymen, slaves, and royalty. There were wicked forests and bayous, Cinderella and ‘Tit Jean, and of course cameos from the Devil in all sorts of disguises.

Slave market at the Rotunda of the St. Louis Hotel in New Orleans (lauraplantation.com)

Fortier’s collection is divided into three parts: animal tales, märchen, and folk-lore, given in both the original Creole and English translation. Saucier’s is a straight-up translation from the French containing “semi-legendary, fairy, comical and animal,” and Chamoiseau wrote his in French, which was translated by Linda Coverdale into English. Chamoiseau prefaced his book with precise instructions of “read these stories only at night,” a nod to the hour when the exhausted storytellers were allowed to unshackle their voices – however low the tones had to be kept. Chamoiseau’s is the most original work, and the newest – Saucier and Fortier were both linguists and act as transcribers. Saucier was trilingual (English, French, Spanish) and Fortier was reputed to know eleven languages. (Fortier, vii)

The fables and stories are enthralling – both familiar and ever-engrossing with their kaleidoscopic events. I won’t summarize the tales for you here, save to remind you that food is often depicted as a great treasure or torment, whether it’s Compair Lapin (Br’er Rabbit) stealing supper, children being cooked up in cauldrons, or baptismal feasts the devil attends in disguise. I detected some white-washing in Saucier’s versions (from the outset her Cinderella villains walk away intact), and I couldn’t help wonder what effect her gender may have played in either her reception or translation of the tales. Rest assured that – for the most part- these tales are filled with a myriad of fortunes and gruesome fates. An unfortunate primer in human cruelty for tots long-since departed.

We can all agree the tales are great. To me, the far more interesting question is on the presentation of the folklore itself. Folk lore – folk art too – has interesting tensions of inclusion and separation, a sort of eternal cultural conversation between storyteller/artist and audience.

It starts with folk being  all about the undercurrents. The very nature is special. It’s art not decreed from the Academy or commissioned by the King. It’s homespun, fashioned out of materials at hand and human need to generate beauty.

“Yes, I was Gauguin’s thirteen year old mistress. I even had a name : Teha’amana.”

When pushed into the limelight, folk art is often controversial. Even if it’s made by white, male hands trained in Europe. Cultural gatekeepers long had a thing against the invasion of non-European images. Two years before Fortier’s Louisiana Folktales came out, Paul Gauguin’s “Spirit of the Dead Watching” made waves in Europe. Of course, the shock was about the indecency of the nude – not any fussy discussions of exploitation.

And even when it is appropriated – whether outright stolen or transfigured into a salon frame for Europe to marvel at – the audience gaze can be a problem.

In 1940 New Orleans had a Picasso exhibit. Sculptor Elizabeth Catlett was teaching at the time, and wanted her class to take a field trip to City Park to visit the Delgado Museum (now the New Orleans Museum of Art).  The park was segregated, but no one had thought there was a need to segregate the museum. No non-white had had the notion of attempting entry. 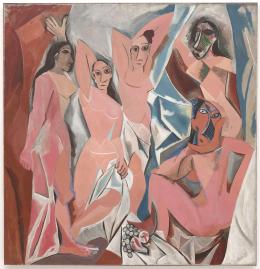 Les Desmoiselles d’Avignon (1907)
“These women are in no way overtly tribal. Nope. Not at all.”

The story goes that she had the bus pull right up to the museum doors. The security guards were so flabbergasted, they let her and the children pass inside.

City Park wasn’t integrated until 1958 – and then only in parts.

But slave children, children of the master, even the master himself, get to be audience to folktales. Let’s step back to the genesis of these Creole collections.

Bouki  – or bukki – is a Wolof word.  It means hyena or wolf. Wolof is a tribal language spoken in modern day Senegal, Mauritania, and The Gambia. Most slaves in Louisiana were taken from this part of Africa. And records from the Laura Plantation – where Fortier went to take that “great trouble” in recording the tales – can attest to that area as the origin of their slaves.

Compair Lapin – well, lapin is French. And the language the stories were told in – across all three books – is Creole, an idiomatic restructured French with a set of rules its own.

It’s interesting, how much ink has been pressed into pages over who “wrote” Compair Lapin (or you may know him as Br’er Rabbit) – Alcee Fortier or Joel Chandler Harris. The hot debate has gone on over one hundred years. Pages on this still stuff the 2011 edition of Fortier’s compilation.

It’s too easy to call the stories “American.” The ownership of Culture, saying who picks up the tab (generates the work), and who gets the joke (audience) is complicated, and has a long history of injustice.

Following emancipation, the great majority of its former slaves continued to live in the Laura Planation quarters. (lauraplantation.com)

The author of Creole Folktales – Chamoiseau – is from Martinique (see: more French slavery). Celebrated Martiniquais poet Aimé Césaire founded the Négritude movement in the 1930s, which rejected colonialism’s erasures.  Négritude sought to empower the downtrodden by reclaiming the African origins of slavery’s descendants, and rejecting the racism of colonial Europe.

The Négritude movement was followed by Édouard Glissant and the Créolité movement of the 1980s. New thinking felt that ignoring the colonizers’ influence didn’t do justice to the people forced to live under that system. They generated their own culture, unique to the Americas. They spoke Creole, not Wolof. Patrick Chamoiseau’s book opens with a beautiful quote from Césaire :

In the introduction to the 2011 edition to Louisiana Folktales, Russell Desmond deals with the inclusion of Fortier’s racism simply:

And thus we are presented with the great irony that a very prejudiced man like Fortier, who was so callous and indifferent to the civil and social rights of the African Americans who surrounded him his entire life, should produce…studies which preserve and analyze the language and culture of the very people whose rights he had so neglected. (xi)

I won’t include Alcee Fortier’s editorializing comments. Modern American has heard them all before, even as it has forgotten the folktales themselves. The elucidating words were Patrick Chamoiseau’s, who spoke to the setting of the tales. He writes about the storyteller’s need for obfuscation, when perhaps the master might be sitting in the audience. The storyteller must exercise caution.

…these stories contain no “revolutionary” message, and their remedies for misfortunes are not collective ones. The hero is alone, selfishly preoccupied in saving his own skin…what we have is a series of counter-values, or a counterculture, that reveals itself as both powerless to achieve complete freedom and fiercely determined to strive for it nonetheless. (Chamoiseau xiii)

I wish that in future prints and compilations, as much ink can be devoted to the history of the folktales and the travails of the storytellers as was given to debate over which man first published them. For even though – in his devotion to science and scholarship – Fortier dutifully recorded the names of the raconteurs, they were sandwiched by disparaging remarks. These names have not been lost entirely.

If any of you pick up these books, I hope the spirit of the storyteller will grant you visions. Not images of a fancy man with mutton chops translating by candlelight, or images of the places bearing Fortier’s name in New Orleans (a high school, a boulevard, a park, and a hall at Tulane). The monolith of the plantation house is far, far away, shadowy at best. May you instead see Compair Lapin dancing in the moonlight, reanimated for all time by thousands of unnamed Scheherazades.

In New Orleans, the Tomb of the Unknown Slave marks a visual reminder of all those souls and names lost to the treachery of that horrible institution. Southern Readers, are there memorials like this in your cities?

Bonus round: What’s your opinion on gentling down fairytales? Do you feel that toning down violence helps children grow into more sensitive citizens?

10 thoughts on “One Thousand Scheherazades and Folktales Three Ways”