I never formally studied World War I in school, so it may be that most of what I know about the war comes from Stanley Kubrick’s film Paths of Glory. If you’ve seen the film, you’ll know it has little to do with the war’s historical timeline, or the reasons for the war itself. It focuses on one French army unit commander, fighting for the lives of several of his soldiers accused of cowardice when failing to execute an impossible attack order. The film tells a wide-angle story about courage, morality, and war through examining a few characters engaged in a single battle. 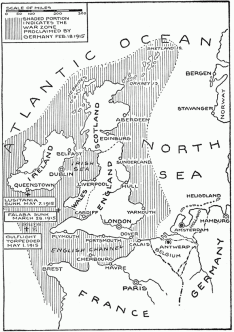 The war zone, as proclaimed by Germany in 1915, with Lusitania site indicated. Click to enlarge. (wiki)

Erik Larson’s books tend to follow that formula as well. His most famous, The Devil in the White City, juxtaposes the stories of Daniel Burnham, architect and mastermind behind Chicago’s World Fair in 1893, and that of serial killer H. H. Holmes, who preyed upon single women lured to Chicago by the fair’s excitement and publicity. That book also introduces a cast of supporting characters well known both in their time and beyond it. Larson engages the reader in the minutiae of a specific place and time to tell a much larger account of creativity, industry, and a rapidly changing, urbanizing American society, with all its requisite vices and dangers.

Larson’s newest book, Dead Wake, comes out in March of this year. It details the last crossing and sinking of the British ocean liner Lusitania by German submarine U-20. Scrutinizing events from a distance of 100 years, Larson tells a story that enables the reader to see the chain of events where, had one occurred slightly differently, or with different timing, or not at all, the tragedy could have been averted.

The book is primarily divided among four narrative perspectives: one on the Lusitania, one on the German submarine U-20, one in Washington, D.C. with President Wilson, and one in Room 40, Britain’s Admiralty Building. Room 40 was a secret military intelligence office set up to break German codes sent between submarine captains and their home base. Once broken, the British were able to track locations of German U-boats patrolling the Atlantic and other waters (similar technology to that showcased in the recent film The Imitation Game, set during World War II). 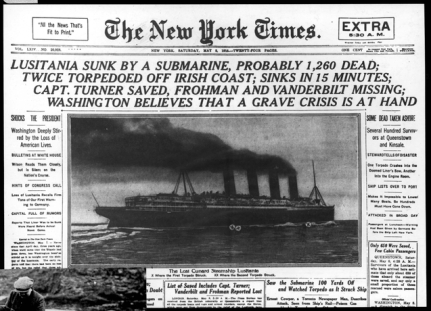 Larson paints vivid portraits of the myriad personalities involved: there is the stoic and introverted Captain Turner of the Lusitania; Walther Schwieger, the U-boat captain who is merciless in general yet tender towards his crew; Theodate Pope, feminist, architect, and sometime medium, traversing the Atlantic with her much younger male companion; and the grieving President Woodrow Wilson, attempting to navigate America through World War I without entering it.

As is often true with well-crafted narrative non-fiction, Larson imbues his story with suspense as events unfold despite the outcome being known. Purportedly, the Germans sank the ship because they believed a great deal of ammunition was aboard the luxury passenger liner. Larson’s depiction of Schwieger, however, indicates that nothing but genuine German markings painted on Lusitania’s side would have prevented him from firing on the ship. U-boat captains were rewarded according to the total tonnage they sank, and the Lusitania was a grand prize in that category. (It turns out the ship was carrying ammunition to Britain’s shores).

The last recruitment poster issued in 1916 before conscription. (dailymail.com.uk)

Larson’s penchant for details is extraordinary. Indeed, the book contains approximately 55 pages of notes. He is able to conjure visions of the ship’s vast and ravenous coal furnaces, of the chaos in attempting to lower and fill lifeboats while sinking at an extreme angle, as well as of the cramped, claustrophobic, and odorous life of a submariner. Larson excels at storytelling, at transforming numbers and facts, bringing those details to life. His portrayal of the Lusitania’s final crossing is a microcosm of an entire war, of monolithic nations at odds with one another, all seen through one ship that went from a “greyhound of the sea” to wreckage on the sea floor, in eighteen minutes.

Do you have a favorite war novel? War narrative? Or narrative nonfiction on another subject?

10 thoughts on ““JUSQU’AUBOUTISTE”: A Review of Dead Wake: The Last Crossing of the Lusitania by Erik Larson”