The Abortionist’s Daughter, a recently self-published novel, deals with the issue of desperate women wanting to end an unwanted pregnancy, but also with a woman establishing her independence and seeking a career in 1916 and with coming to terms with her father, a convicted felon and heavy drinker. It recounts the coming-of-age story of Melanie Daniels, a 23-year-old woman whose father was sent to prison for five years in 1910 for performing an abortion on a woman who died. The town physician, he had been secretly helping women end unwanted pregnancies for years in the small Adirondack village, 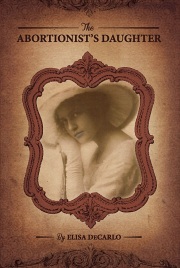 Six years later, her father is home, and the family is shunned by the townspeople. Her father no longer is the admired doctor but a drunken killer doc, and the family struggles to make ends meet. Before her father was sent to prison, the family was well off, and Melanie had been considered the most marriageable girl in her village. She’s beautiful, but the young men and women who were once her friends in Muller’s Corners now mock her. Only sweet 18-year-old Paul is infatuated with her, and she has no interest in him. At 23, she’s afraid she’ll end up an old maid. She yearns for a different life.

As she daydreams of better days for herself—becoming a Zeigfeld girl, longing to be like one of the beautiful women gracing the fashion pages of magazines, especially Photoplay–a stranger enters her life. Briefly visiting Muller’s Corners, James Louis Throckmorton is handsome but quite a lot older than she and sensually exciting. She quickly succumbs to his sexual charms and runs away with him to New York City.

Here, Melanie discovers the exciting world of Broadway and the theater in the big city, where life is not the restricted, judgmental society of Muller’s Corners. Even women’s clothing is not as restrictive. Melanie dumps her whalebone corset for an elastic one, for example. It’s much more comfortable and a lot less damaging. And while she blames her father and mother at first for her miserable life back home, Melanie learns important lessons as she struggles to build a life for herself and an acting career

DeCarlo writes about 1916 New York with a flair for fashion, one of her own interests. She brings the era to life with her knowledge of fashion, theater, movies, literature, popular music, and early 20th century morals.

Abortion and even contraception in 1916 were illegal in the U.S. Only a few states allowed abortions due to incest or rape or in case of danger to the health of the mother. This was the year that Margaret Sanger formed the Birth Control League (later named Planned Parenthood) and opened a birth control clinic in Brooklyn. She was arrested soon after.

The backdrop of the story – that of contraception, family planning, and abortion –foreshadows the backlash happening today with people harassing women entering clinics and with laws making safe abortions tougher to find. Will we see a resurrection of the Comstock laws under a different name one day?

DeCarlo tells a story that’s interesting with realistic characters trying to make the best of bad situations and get on with their lives. Throckmorton is not an evil person, though there is not much to redeem him. And Melanie and her theater friend, Gladys, are engaging characters.

DeCarlo has been a working journalist, an audiobook abridger, magazine staff writer, and comic performer. She has a keen knowledge of both fashion and show business history. She has also appeared in several popular soaps and has written comic spots for NPR’s All Things Considered. Her previous books include the novels The Devil You Say and Strong Spirits and the anthologies of her humorous essays, Life’s A Stitch: The Best of Women’s Contemporary Humor, The Best of The New York Times’s Metropolitan Diary, and Goddesses We Ain’t.

What was an experience in your youth that changed how you look at life?