As a Sales Executive-Turned-Writer with twenty years of selling behind me, I feel comfortable in saying that I may be somewhat of a “mindful expert” on the matter of selling. In the first three months after the publication of my first novel, Falling Through Trees, I did more than thirty book signings in a variety of settings from coffee shops to sports stores. I have come to realize something about the art of selling one’s own written wares: primarily, that the skill sets and personality traits of a successful writer are not exactly synonymous with those of an adept sales person.

Never the shrinking violet, Oscar Wilde is purported to have said, “I have nothing to declare except my genius.”

Some may say, n’er the twain shall meet…. Or shall they? I believe they can, and I will share a few key points that I have learned over the years. Suggestions that will hopefully help fellow writers successfully market their books, particularly in an era where so much of book promotions do fall on the shoulders of the writer. Back in the 19th century, Mark Twain, Charles Dickens, and Oscar Wilde regularly did tours and hit the boards almost like stand-up comedians or performance artists to sell their books. Today, newly published writers need to do almost as much for their own literary works, especially given the highly competitive nature of book sales and the underlying thread of the busy times we live in, as writers regretfully and repeatedly hear, “Oh, I don’t have time to read anymore.”

Make mine a pink Cadillac. (marykaymuseum.com)

By nature, Sales people are far more gregarious, strong-willed (at times to the despair for others), and comfortable as the center of attention. They love the thrill of the sale, and continually thirst for the next big opportunity to shine – and outshine – others. The mere thought of being alone, in a quiet room with only their thoughts to bear, brings shivers to their spines and a foul taste to their tongue. Mary Kay Ash (Mary Kay cosmetics), David Ogilvy, Dale Carnegie and Larry Ellison are all contemporary individuals, notable for their efforts and renowned successes in the sales arena. Their sales endeavors earned millions of dollars for generations to come.

Writers, on the other hand, are more inclined to introversion, stamped on their foreheads with a “T” (the Myers-Brigg’s Thinker trait), and are far more comfortable with stretches of calm and solitude. It’s the quiet time that allows the stories brewing and infusing inside their heads to eventually emerge. Selling anything is akin to torture, and the proverbial door-to-door salesman is actually a monstrous alien of undetermined repute. Crowds and confrontations may often be avoided. For new writers, in particular, the thought of standing before a group of people will produce a tightening of the spine that may take days to unfurl. 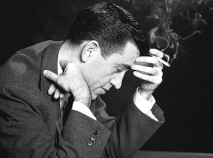 No, Mr. Salinger will not be speaking at your book club.
(sandiegohistoricalsociety.com)

J.D. Salinger is perhaps one of the most famous reclusive writers. He spent decades living alone, shielded from society and hiding from the celebrated release of his first novel, Catcher in the Rye, back in 1951. Harper Lee, who wrote To Kill a Mockingbird in 1960, is another example of a writer recluse, one who even won the Pulitzer Prize for her first novel, yet remains out of the public eye in her ending days.

So, the question that begs to be asked is how can one create the perfect blend of a successful writer and a savvy salesperson? How do you merge the hours of solitude required to write long pieces of works, with the need to be in the public eye and effectively sell that work when it is complete? And, how does a newly published author move his work off the book-signing table and into readers’ hands? There are two answers, and they are quite simple: it’s all in the numbers, and it’s about making connections.

Let’s tackle the ‘numbers’ part of this solution, first. All sales people who meet and exceed their numbers know that behind their winning smiles, that beyond the intimate knowledge of the product or service they sell, the key to success is in the pipeline. It is simply a numbers game, and the more people they reach out to and the more sales calls they make, the greater their number of sales in the end.

What does that mean to an author at a book signing? It means that she must verbally reach out to (almost) every individual who passes by. The word “almost” is interjected because, of course, there will always be those people who walk directly by, working so hard to avoid eye contact and conversation, that they trip over themselves while running away. For the rest of the passersby, however, it is important not to discount anyone because although we certainly can make assumptions, we never really know who is going to love our books. (Don’t judge a book by its cover holds true!) Furthermore, the more people an author is able to talk to, the greater the chances of drawing them in and beginning a discussion that will lead to the delightful sale of a novel.

This leads into the second part of the solution – that of making a connection with people. The truth of the matter is that very few people will purchase something from someone whom they do not like, and then most usually only in a dire emergency. Let’s face it… no one will perish if they do not read our little novel (as much as we all feel that no one on the planet should live without it). How, then, can a writer at a book signing make a connection and get people who walk by to stop and pay attention? By paying attention to them, of course!  Interacting without judgment and asking them a question is the perfect opener – ask something benign about their day, compliment them on their attire, mention the weather… anything, really, that will demand a little eye contact and wedge open the space between both writer and prospective reader to allow a conversation to ensue.

The next step for a writer is to try to bridge the gap that exists between all strangers in the beginning, by finding something that both parties have in common. It may be what you like to read or where you live or where you are from. It may be that you discover you both love peanut butter cookies, but only the ones with the fork imprints on them,which makes that cute little tic-tac-toe design on the top. Who knows… the point is, that if an author wants someone to buy her book, she needs to engage with them, and find something shared. Once that occurs, people see one another differently, the playing field changes and the opportunity for a sale begins.

Remember, most of us do seek connections with others, and most of us want to succeed. Writers need to be sure to talk to everyone they can about their book, and then figure out how to create a link and make the connection. Ultimately, making people like you, just a little, is what changes the status of ‘strangers’ to ‘acquaintances’ and opens doors … and at least enough to buy your book.

For writers, if publishers are going to throw us into the vicious arena of sales to fight for them all, one-by-one, then we must be armed with the proper techniques to do so. For readers, next time you walk by a table and see a hopeful, perhaps tentative author sitting there surrounded by her latest masterpiece, perhaps you will take a moment to stop, say hello, and allow a new door to open.

Have you ever attended a book signing not intending to purchase a book, but found yourself compelled to do so? What changed your mind? Was it the book itself, or the writer behind it?

4 thoughts on “The Art of Selling Your Book at Signings”