Last Tuesday I wrote about my pilgrimage to Rowan Oak, Faulkner’s home in Oxford, but there’s more to Oxford than Faulkner.  Below are some suggestions if you’re thinking of paying a visit. 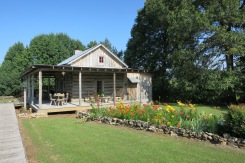 friend Claudia and I stayed there for a more rural experience than we’re used to in metro Atlanta.

2. Natchez Trace Parkway: The Old Natchez Trace runs 444 miles through Alabama, Mississippi, and Tennessee and 10,000 years of history.  Originally a travel corridor for Natchez, Chickasaw, and Choctaw Indians, it later provided access for early European settlers. President Thomas Jefferson designated it a national post road for mail delivery between Nashville and Natchez. Part of the parkway runs just east of Oxford. On a short drive we saw Indian Mounds and a small graveyard for the unknown Confederate dead.

The Ole Miss campus: We were lucky to have Jerry and Julie Walton as tour guides. As Provost Emeritus of Ole Miss, Jerry was the perfect person to share his beloved campus.

1. The Lyceum: Designed by William Nichols and completed in 1848, The Lyceum originally housed the classrooms and faculty offices and is today the oldest public building in Mississippi devoted to higher education.

Jerry shows Claudia the bullet holes, in the Lyceum’s columns, from the riot .

The Lyceum has witnessed two different kinds of battles. In 1861, with the outbreak of the Civil War, the entire student body enlisted in the Confederate Army, joining Company A, the 11th Mississippi, also known as the University Greys. They suffered a 100% casualty rate in Pickett’s Charge during the Battle of Gettysburg. The war still haunts the Ole Miss campus in its sports teams, the Rebels,  and the very nickname for the university, Ole Miss,  a throwback to plantation days. It is not a shortened version of  ‘Mississippi,’ as commonly assumed. Rather, it  refers to the wife of  Old Marse, the plantation owner.

A hundred years later, in 1962, a different kind of battle raged, one for Civil Rights, when James Meredith attempted to enroll. Predictably, the governor, Ross Barnett, stood in the proverbial schoolhouse door, until the United States Court of Appeals for the Fifth Circuit and the U.S. Marshals prevailed. Meredith entered campus September 30th. A riot followed, leaving two dead and countless others injured. The monument shows Meredith symbolically entering the university. The replica of the portico is labeled Courage on one side and Opportunity on the other. In 2002, the university celebrated the 40th anniversary of integration with a year-long series of events, “Open Doors.” In 2008, the site of the riots, the Lyceum-The Circle Historic District, was designated a National Historic Landmark.  Unfortunately recent events on campus have marred this triumph of justice.

2. The Barnard Observatory, named for Frederick A. Barnard, the third chancellor of the university: His goal was to make Ole Miss the preeminent institution in the South for science. The observatory was completed in 1859, and the world’s largest telescope was steaming down the Mississippi River, when the Civil War broke out. The telescope ended up at Northwestern, where it is still in use. This beautiful building now houses other interesting projects. See below.

3. The Center for the Study of Southern Culture, housed in the Observatory: America’s first regional studies center. Its mission is “to investigate, document, interpret, and teach about the American South through academic inquiry and publications, documentary studies of film, photography, and oral history, and public outreach programs.  At the core of the Center’s work is its cross-disciplinary faculty and the undergraduate and graduate degree programs in Southern Studies.” The New Encyclopedia of Southern Culture is a recent publication.

4. The Southern Foodways Alliance, one of the Center’s institutes: Its mission is to document, study and celebrate “the diverse food cultures of the changing American South. We set a common table where black and white, rich and poor — all who gather — may consider our history and our future in a spirit of reconciliation.” See this article in the online magazine The Bitter Southerner for an in-depth look.

1. Square Books, located in the former drugstore where Faulkner packaged his manuscripts:  Founded by Lisa and Richard Howorth, Square Books has been named the Bookstore of the Year by Publishers Weekly.  In a time when more and more bookstores are closing and readers are turning to Kindles, the Howorths have found a formula to keep patrons happy, that is, good books and plenty of them. In fact, we couldn’t keep out of there! I especially appreciated the dedicated Faulkner section and the thorough selection of local writers. Square Books has been instrumental in making Oxford a must-stop for writers. 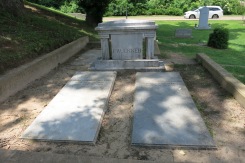 buried: Our BNB hostess told us that people make a habit of adorning Faulkner’s grave with liquor bottles and wine corks, though I didn’t see too much in the way of that dubious honor. Rather, I found his grave sad–unadorned, unkempt, ignored. Of course, he isn’t really “there.” I prefer to think he’s haunting the town, observing its heroes and deadbeats, listening in on interesting conversations, and keeping a weather eye on visitors to his beloved home Rowan Oak.

Small cities and towns that boast colleges and universities are often delightful places to visit (ex. Milledgeville and Athens, Georgia). Do you have others to suggest?

8 thoughts on “Beyond Yoknapatawpha: Oxford, Mississippi”