Our own Brenda Lloyd at the Atlanta Writers Club tent

What do Karen Joy Fowler, Ron Rash, US Poet Laureate Natasha Trethewey, Barbara Brown Taylor, Joyce Carol Oates, Thrity Umrigar,  Pat Conroy, and scores of others have in common? They  all participated in the Decatur (Georgia) Book Festival this past weekend. The festival claims to be the largest independent book festival in the country. That claim probably comes from the dozens of “emerging” writers and poets who get to do short readings.  Still, the line-up of big name authors is impressive, and the room made for newbies is encouraging. The festival offers a variety of formats as well as authors. Rather than bore you with a list,  go to this link to see for yourself.

I could have spent the entire weekend hurrying from one venue to another, most located around the old courthouse square in Decatur, but I limited myself to two panel discussions to save time for rambling. First I chose  “On the Fringes of War” because it featured one of my favorite authors, Ron Rash, whose novel Serena is so well written in every way that I used it as a sort of textbook to learn how to incorporate setting into narrative for my own novel. Rash’s latest work is a collection of short stories, Nothing Gold Can Stay. Rash says he always starts with an image, rather than an outline. Imagine a teakwood gun, among others, mounted on a wall. It was the gun a Japanese sniper fired, hitting Rash’s uncle in his helmet and became the inspiration for a scene in one of the Gold stories in which a soldier killed the sniper who had shot at him. Joining Rash on the panel were Tasmanian author Richard Flanagan, who discussed his epic The Narrow Road to the Deep North, based on his father’s ordeal working on the Thailand-Burma “death railway” of WWII, and Alabama journalist and novelist Roy Hoffman, whose latest book is Come Landfall, about three generations impacted by WWII, Viet Nam, and Iraq. One of the main points they discussed was how novelists make readers believe their “Big Lie.” Rash noted that the secret is getting the small details right. As moderator James Taylor said, “Poets and novelists take the scenic road to the truth.” 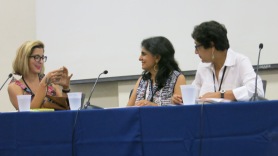 The other panel discussion I attended, “Love in  the Time of Globalization,” featured immigrant novelists Thrity Umrigar (The Space Between Us) and Porochista Khakpour. The topic, a nod to Gabriel Garcia Marquez’s Love in the Time of Cholera, was an awkward fit for these two novelists since “love” doesn’t seem to be their theme.  Umrigar, originally from India,  has written six novels and one memoir. Her most recent book, The Story Hour, is the one I had come to buy. However, as I listened to Khakpour, an Iranian-American, I realized I wanted her new novel, The Last Illusion, as well.  Their connecting thread seems to be the power of stories, whether personal narratives that deepen friendship as in Umrigar’s book or a fabulist retelling of Persian myth in The Last Illusion.

What I took away from both these discussions was, first, what I expected: hearing world-class authors explore interesting topics; second, what I didn’t expect: learning about three authors I’d never heard of and whose books I now want to read. We’re so lucky here in Atlanta to have not only the DBF but also the MJCCA 17-day festival in November, as well as a plethora of readings and signings, particularly those arranged by the Georgia Center for the Book. Check out our page Georgia: Author Talks and Book Signings for more information.

The Decatur Book Festival offers plenty of events for kids, too.

What book festivals have you attended? Please share your impressions.