“Take a book, return a book.” That’s the only rule of the wildly successful grassroots operation responsible for Little Free Libraries popping up in neighborhoods everywhere, including yours.  A Little Free Library is nothing more than a weatherproof wooden box, about the size and shape of a dollhouse, mounted on a post near any street, filled with used books for the taking. It’s that simple. Anybody can build one in any style, no permission required. Anybody can use one, no library card needed. It’s a concept destined to appeal to “unbound readers.”

As good ideas do, Little Free Libraries (LFLs) have caught on and grown into a worldwide phenomenon in a remarkably short time. The first one, built as a little red schoolhouse in 2009 in Hudson, Wisconsin, by Rotarian Todd Bol, was conceived as a quiet memorial to his mother, who was a teacher and booklover. To Bol’s surprise, his one-room schoolhouse bookbox drew an overwhelmingly positive response, and the idea spread—first through word-of-mouth and local media, eventually via national news organizations. Bol, a community development specialist, saw the potential, and with the help of friend and fellow community developer, Rick Brooks, co-founded the non-profit company that became what Huffington Post called a “global sensation.”

Individual proprietors are called stewards. For a $40 registration fee, each steward can be listed on the official website and receive a numbered plaque to mount on his/her LFL. According to the March 2014 Rotarian, the company’s original goal was to create 2,510 libraries, one more than Andrew Carnegie supported. They reached their goal a full year and a half before their target date. Now, just five years after they began, they have distributed over 15,000 numbered plaques, with thousands more in the works. The website map shows LFLs registered on every continent except Antarctica, including three in New Zealand and one in Iceland.

LFLs arrived in our bookish community of Decatur, Georgia in 2011. When I first saw #838 on Wilton Drive a few blocks from my house, I was captivated. A year later, I found a discarded dollhouse on a neighborhood curb, carted it home with a friend’s help, asked husband Moe to convert it, and ordered the plaque. I would be Little Free Library Steward #6722. Shortly thereafter, the plan took a surprising detour.

Moe’s intentions were good, but it’s an understatement to say he didn’t get to the job right away. He did mount the

dollhouse on a pole, sans improvements, with a promise to finish the LFL project soon. There it stood, poled in the front yard—an empty dollhouse, with no roof, no door, five open-front rooms, and a black plastic bag stretched over the top—for two months. The neighbors began to ask questions. I was about to apply some gentle pressure for a projected completion date, when one day, a dollhouse-sized chair appeared in one of the rooms. A few days later, a matching table showed up, and in another week, a second chair. Cute, I thought. Moe’s idea of a joke. But he denied any knowledge of how the furniture had come to be there. A week or so later a miniature dining room hutch appeared, followed by a corner cupboard, a bed, a dresser, and a kitchen stove, all at weekly intervals.

We accused all our friends and neighbors of the cleverness, but they, too, denied involvement. Though we never once witnessed any of the deliveries, we began to anticipate the mysterious arrivals, and were disappointed on the weeks when nothing new showed up. We couldn’t take it down now. Not till we discovered the identity of our mystery benefactor.

One week, a piano, the next, a tiny art easel, complete with an original close-up painting of a nose and an eye, as if a full-size face were peeking through a miniature window. On Easter morning, a little bunny showed up, and not long after, a ceramic Siamese cat. We even found custom-made curtains hanging on the windows one morning. Still, no one confessed to the deed, though we were pretty sure our good friend and neighbor, Tom, was the guy. He steadfastly denied it. We finally decided it was a coalition of friends, sworn to secrecy. 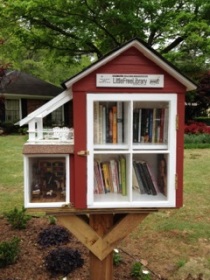 Across seven months, the small house became a fully furnished dollhouse, yet we knew nothing of how it had happened. But it was time to get on with the Little Free Library plan, so with no apparent hope of solving the mystery, we took the dollhouse down and hired a carpenter to make the conversion. The next day, a sign, “Boo Hoo,” appeared on the empty pole.  In response I posted an open invitation to the furniture elves to reveal themselves. That evening, to our huge surprise, a retired couple we didn’t know, Bill Kaiser and Barbara Allen, who also live in Decatur, knocked on our door and confessed all. He is a folk artist who had driven by the empty dollhouse every week, and one day, on a lark, began putting furniture in it. When no one took the pieces out, he kept adding one at a time, early on Sunday mornings. The mystery became as much fun for him and his wife as it was for us.

Little Free Library #6722 is now complete and properly posted in our front yard on Pinetree Drive in Decatur. People stop and browse every day. The book selection has turned over twice in three months. We turned one of the dollhouse cubbies into a cozy museum room, the “Kaiser-Allen Reading Room,” in honor of the people who had stumped us for seven months. Two of its walls are lined with shelves full of miniature books with classic titles and real pages. There’s a comfy-looking wingback chair in the corner, a candelabra and a rolled-up New York Times on the sidetable, original art on the easel, and yes, a Siamese cat on the braided rug.

Y’all come see it if you’re ever in the neighborhood. Take a book. Return a book.

When reading for pleasure, do you prefer to borrow from libraries or buy from bookstores?