While there isn’t a cure-all for all the problems associated with long car trips, for years I have carried a hardback copy of The World of Pooh in the back pocket of the driver’s seat to help my family withstand such trips.  There is nothing that shortens an otherwise long trip like a reading from Pooh. 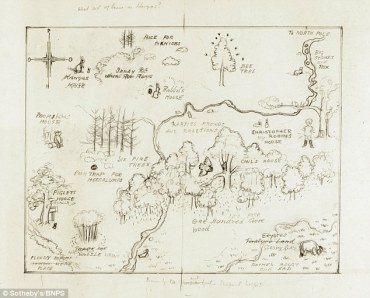 The 100 Acre Wood, First Ever Sketches by Ernest H. Shepard (dailymail.co.uk) Click on image to enlarge.

I came to Pooh late as I first read The House at Pooh Corner as a freshman in college with my boyfriend.  East Stroudsburg State College was not a hopping place back then, and Pooh occasionally became our entertainment.  My husband was more fortunate than I as his mother read him A. A. Milne, the author of the Pooh stories, when he was a child.  He still quotes passages.  Whatever age you meet Pooh Bear, you are sure to want a lasting relationship with him.

My earliest teaching position was with first and second graders, and that is where I honed my various voices for out loud reading.  My students and I would sit in our reading corner, and I sometimes laughed so hard I cried.  My students frequently asked if I was okay.

Both of my children have been well versed in Pooh, and they’ve spent many car trips listening to my deep Eeyore voice or my high-pitched Piglet.  We can each quote some passage or other, and there is disagreement among us about which character is the most quotable.

When the response to a question requires some thought, I might quote Eeyore, “I’m thinking–if anyone knows what that means, which I doubt!”

Another favorite Eeyore quote is in “Pooh Invents a New Game and Eeyore Joins In.”  The game is Poohsticks and most of the animals in the 100 Acre Wood are gathered on a bridge.  Each drops a stick on one side of the bridge, and they all run to the other side to see which one comes out first.  Roo can’t see his and cries, “My stick’s stuck.  Is your stick stuck, Pooh?”  Soon Eeyore comes floating out from under the bridge, and a great discussion occurs while the sad little donkey catches an eddy and circles underneath the others who speculate as to how Eeyore got there.  A very guilty Tigger protests his innocence and says he coughed and startled Eeyore, but Eeyore claims Tigger bounced him:  “Bouncy or coffy, it’s all the same at the bottom of the river.”

Able to look at the human condition with humor and understanding, Milne helped me learn and teach life lessons. For instance, in an attempt to get on Eeyore’s good side, Pooh and Piglet compete with each other to give their friend a birthday gift.  All Pooh has is a licked-clean honey pot, and poor Piglet is heartbroken when, falling on a balloon he’s taking to Eeyore, he is left with a limp piece of something.  Both Pooh and Piglet make their presentations, however, and Eeyore asks Piglet, “What color was my balloon when it was a balloon?”  He saves the feelings of his two friends when he finds his flat balloon will go in the empty pot so that it is no longer empty.

One of my favorite Piglet quotes is in the chapter “In Which It Is Shown That Tiggers Don’t Climb Trees.” Pooh and Piglet go for a walk, and Pooh enjoys telling Piglet scary stories about the terrible Jagulars that climb trees.  The Jagulars wait for someone to walk under them, yell, “Help, help,” and, when those walking underneath look up, the Jagulars drop on them.  Unbeknownst to the pair, Tigger, showing off for his little friend Roo, says that he can climb any tree.  He proves it by taking Roo up a tall tree.  Tigger climbs higher and higher until he looks down.  Suddenly he confesses to Roo that Tiggers can’t climb down trees.  Meanwhile Pooh and Piglet begin to walk under the tree. When they hear, “Help, help!”  Piglet cries out loudly, “I’m looking down!”

In the Pooh stories you will find Woozles and Heffalumps, Wols, and a Wolery.  All will make the long, slow trip to anywhere much more enjoyable while gently reminding us what friendship is all about.  In “Expotition to the North Pole” all the animals are gathered around Christopher Robin when Eeyore asks if anyone is sitting on his favorite food, thistles.

“I believe I am,” said Pooh. “Ow!” He got up, and looked behind him.“Yes, I was.  I thought so.”
“Thank you, Pooh.  If you’ve quite finished with it.”  He moved across to Pooh’s place, and began to eat.
“It don’t do them any Good, you know, sitting on them,” he went on, as he looked up munching. “Takes all the Life out of them. Remember that another time, all of you. A little Consideration, a little Thought for Others, makes all the difference.”

If you are already familiar with these stories, let me say that, whether you are on a long car trip or spending time with a grandchild, they bear rereading.

What’s in your backseat pocket?