In 1976 I was a single mother, aged 26, and a graduate student in San Francisco. Sherene handed me a copy of The Golden Notebook saying, “If you can find the time to read it, this book will make you think.” At 635 pages the novel looked rather daunting, yet somehow I found the time. The Golden Notebook set me on a path to self-discovery that altered the course of my life. 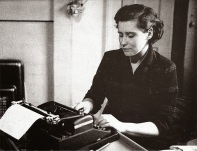 Stories like mine abound. The Golden Notebook’s publication in 1962 caused an uproar. Like Betty Freidan – whose Feminine Mystique was published one year later – Doris Lessing had revealed “the problem that has no name.” In one sequence, the book’s protagonist (Anna Wulf) obsessively washes herself to avoid the smell of menstruation. In another, Anna prepares an elaborate meal (veal Milanese with baked apples) for her lover. Yet when he phones 2 hours late to say he won’t be coming after all, she responds, “It is quite all right,” and later thinks, “…in their emotional life all these intelligent men use a level so much lower than anything they use for work…”

Lessing said she only wrote what she saw, but the effect was electrifying. Male critics rushed to call her “unfeminine,” “a ball-breaker” and “a man-hater.” Yet the author often claimed The Golden Notebook was equally misunderstood by all. When asked about themes, the first thing Lessing liked to mention was the shape of her book: “The structure was this. A short conventional novel …is interleaved with notebooks, diaries, [and] comments about what went into it.”

Pundits now have a word for this kind of format: Metafiction. Its changing perspectives serve as a comment on truth and the promise of writer to reader. When first conceived by Lessing, the concept was revolutionary. More important, the structure suited her themes. In addition to the “short conventional novel” (called Free Women), there are four notebooks – red, black, yellow and blue – plus one uber-notebook (golden, of the title).

Free Women concerns a relationship between two roommates in the London of 1956 – the writer Anna Wulf and an actor named Molly. Both are Communists, and each is pursuing her “freedom.” That term becomes ironic as the story and notebooks progress. Anna’s red notebook records the hopes and disappointments she felt as a Communist. The black concerns her writing life – starting with a description of Anna’s first successful novel and ending with her efforts to overcome writer’s block. The yellow samples her fiction, while blue records her perception and thought. In the end, a golden notebook subsumes the other four to become a symbol for psychic unity. 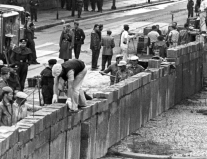 This brings us to another theme – madness and sanity. Here is how the book begins: “The point is,” said Anna, as her friend came back from the telephone on the landing, “the point is, that as far as I can see, everything’s cracking up.” It’s not just herself that Anna refers to. She’s also describing the post-war world. As the story opens, news of Stalin’s purges has begun to spread, the Soviet Union’s Iron Curtain has divided Europe and the British Empire is losing colonies left and right. Wulf and her friends have been wounded in just such a way – by division and alienation – men from women, and within each psyche, one “self” from another.

Anna’s task is to reunify her world. She goes about this in three ways: keeping her notebooks, seeing a psychoanalyst, and allowing herself to “crack up.” It was this process – healing a divided self – that so captivated me in 1976. While reading the novel I often thought, so that’s why I feel this way. The notion of “cracking up” in order to heal seems counter-intuitive. Yet as the story proceeds, everything falls into place. Anna performs a kind of alchemy – the purpose of which is transforming base metals into gold. When she learns to embrace all of her different selves (red, black, yellow, blue), she ends her writer’s block and begins the golden notebook. 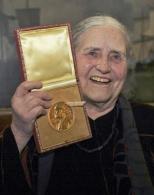 Doris Lessing and the Nobel Prize for Literature (news.bbc.co.uk)

Lessing won the Nobel Prize for literature in 2007. This is considered her greatest work. When the author died last year, my book club agreed to read the novel – most of us, for the second time. We picked it up again with great trepidation. Would it have the same impact as nearly 40 years ago? The answer was no: today’s 26-year-olds are less likely to receive The Golden Notebook with as much joy as we did the first time.

That’s a good thing. Our world has changed a lot since 1956: the Cold War has ended, and women have greater parity with men. Most striking of all in this era of “tweets,” Anna’s manic descent into madness seems self-indulgent now. Even so, none of us regretted rereading the book. Perhaps that’s because it serves as a meticulous record of a certain time and place. As such, I think it remains unsurpassed.

Which works of fiction have changed your life? Would you read them again?

5 thoughts on “Revisiting Youth: The Golden Notebook by Doris Lessing”