Did you receive this post via email? Please click on the title to read in your browser.

Tuesday, I introduced you to military biographer Robert Coram, told you about his background, and discussed his approach to writing. Today–a bit about his biographies, the three he’s published and the one still in draft stage.

Boyd: The Fighter Pilot Who Changed the Art of War (2002): Of  John Boyd, Coram says, “One definition of genius is concentrating on one thing to the exclusion of all others, and Boyd’s life was concentrated exclusively on his work.” Nicknamed Forty Second Boyd for his record of defeating opponents in simulated air-to-air combat in less than forty seconds, Boyd accomplished his most important work in airplane design and military strategy. For example, he was

responsible for developing the F-15, F-16, and A-10, all the while combating Air Force generals who wanted to turn lightweight maneuverable fighter aircraft into slower, heavier aircraft.

Coram calls Boyd’s OODA loop his “greatest contribution to thought today, both in business and in the military.” (OODA stands for observe, orient, decide, and act.) Coram says, if you can cycle through the loop quicker, you can cause “ambiguity, uncertainty, confusion, mistrust” in your opponent’s mind as you get ahead in the decision-making process. During the Gulf War, Boyd briefed Secretary of Defense Dick Cheney, and it was Boyd’s strategy, not General Schwarzkopf’s, that “led to our swift and decisive victory,” asserts Coram. In short, Boyd was a modern-day Sun Tzu, author of The Art of War.

Being a genius leaves little room for polite manners or even family time. Boyd thought most generals were mere careerists, concerned only with promotions. He liked to brag to his friends, a group known as The Acolytes, “I hosed another general today.” He was hard on his family, but, Coram believes, “Having a screwed up family is a small price to pay for becoming a part of American history.”

American Patriot: The Life and Wars of Colonel Bud Day (2007): If genius defines Boyd, then patriot defines Bud Day. After the publication of the Boyd biography, Coram received many suggestions for his next book, with Day being recommended the most. Coram drove down to Ft. Walton Beach to meet to Day. They ended up “interviewing each other” to see if they could work together.

Bud Day is the most decorated officer in modern military history. His honors include the Air Force Cross and the Medal of Honor (as of 2013, he is the only person ever to have received both). He served in almost every branch of the military. Beginning as a Marine, he spent almost three years in the South Pacific, later joined the Iowa Air National Guard, then the Army, and ended up as an Air Force fighter pilot.

In 1967, during the Vietnam War, his plane was shot down, and he suffered serious injuries. He escaped from prison and made it all the way to South Vietnam, where he was captured just shy of the American lines. Singled out for brutal torture because he had caused the North Vietnamese to lose face, he spent five years in the “Hanoi Hilton,” where he met John McCain, his lifelong friend. Day’s “shining moment” was his standing by his code of conduct (“Return with Honor”) while being tortured. He refused to accept release. McCain says of Day: “He’s one of those people for whom everything is black or white.” When he did return home, Day, a lawyer, devoted himself to fighting cuts to VA medical benefits, most of which he was able to restore.

Unlike Boyd and Victor Krulak, who possessed their share of flaws, Coram calls Day, “Captain America.”  Coram says he did run across something in his research purported to be a lapse in Day’s judgment, but he didn’t include it in the biography because his source was one of Day’s enemies. He asked Day about it, but received only “a 100 mile stare” in response.

Brute: The Life of Victor Krulak, U.S. Marine (2010): Coram believes, with Sophocles, “One must wait until the evening to see how splendid the day has been.” Indeed, General Krulak’s morning was not splendid. He asserted that he had done nothing of significance in his first 18 years and therefore didn’t want a “womb to tomb” biography. As a matter of fact, he had covered up an early divorce and changed his background from Russian Jew to Episcopalian because such details would have blocked his military career. Even Krulak’s son, Marine Commandant Charles Krulak, didn’t know these facts, until Coram showed him the genealogical research. Coram says, “people [like Krulak] who are worth a biography have often put aside or burnished parts of their lives. The more things that make them suitable for a biography, they more things they want to hide.”

Nicknamed “Brute,” when he was a runty 116 pound 5’4” plebe at Annapolis (which he qualified for, the story goes, by being whacked on the head to raise a lump to make himself taller), Krulak prospered by sleeping less and working harder, but also by  ingratiating himself to higher-ups and exaggerating his exploits. His accomplishments are significant—he commanded all the Marine Corps forces in the Pacific, he helped create the Higgins boat (its square bow retracted to become a ramp; it served as a troop carrier to Normandy and the South Pacific; and “it won the war for us,” according to General Dwight D. Eisenhower), he pioneered use of the helicopter during the Korean War, and he defended against attempts to dissolve the Corps. 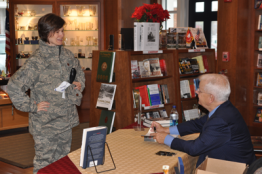 The publication of BRUTE coincided with the 235th anniversary of the Marine Corps. (mca-marines.org)

But to Robert Coram, General Krulak’s shining moment came when he stood up to President Johnson. No one else would tell LBJ that he was wrong about Vietnam, that the war would cost him the election. Krulak knew going into the meeting he would suffer the consequences, and he did. He was retired without ever receiving his fourth star, without ever reaching the Commandant’s position (which his son did achieve).

If some of Krulak’s actions in his early years were disturbing, Coram forgives them. He says in his Acknowledgements: “…my sins as a young man were scarlet, and they were many. I do not consider those green actions the defining moments of my life, and if I am to be measured, let it be by the deeds of my later years. Here I afforded Brute Krulak what I would ask for myself.”

Coram believes his fourth biography may be his best yet. God’s Co-Pilot, still in an early draft stage, tells the story of Robert Lee Scott, Jr., from Macon, Georgia, whose famous book God Is My Co-Pilot is based on his experiences with the Flying Tigers.

Coram’s web site is full of writing aphorisms, perhaps targeted at dreamy-eyed newbies like me:

It’s not about the writing; it’s about the story…The romance of writing is only seen by those who do not write for a living. I include a number of writers in this… Here is the secret of writing: there is no secret…If a reader puts one of my books down after reading the first page, or the first ten pages, it is my fault.

Or, he could be talking to himself. Even after all these years, he still finds writing to be “like going down to the basement and being beaten every day. Writing is as difficult as it ever was. I hate it. And yet, I’m at the top of my game.”

If you have a question you’d like to ask Robert Coram, add a comment below, and I’ll pass it along.