T. S. Eliot may have felt that “April is the cruellest Month,” but not in lovely Decatur, Georgia, where Spring has at long last arrived. It’s short-sleeve weather full of sunny days and blooming trees. We are bound today for Agnes Scott College’s McCain Library to view the Robert Frost Collection, a fitting pilgrimage for National Poetry Month.

1946: Mr. Frost with students at dinner given in his honor.

The collection, begun by librarian Edna Hanley Byers, contains clippings, photographs, two portraits of Frost, a bronze bust, a pencil and watercolor drawing of Webster’s Corners, inscribed “Our Derry Place, 1900-1910, RF,” copies of poems handwritten by Frost, complete sets of his Christmas cards, and first editions, among other things. They celebrate the 20 visits the poet made to Agnes Scott, beginning in 1935.

Emma May Laney, an English professor, initiated this relationship that spanned almost 30 years when she invited Frost, offering a small honorarium. When he didn’t answer, she wrote back, raising the amount of money. At last he replied, apologizing, embarrassed that he hadn’t gotten around to responding. His first visit, November 7th, 1935, was a one-day thing, but from 1945 on, Frost stayed longer, usually three to four days, timed for the last week on January when he headed to Miami.

Frost made himself right at home, staying with Agnes Scott’s president, Dr. Wallace M. Alston. During a typical residence, he spent his time exploring the Gothic-styled campus and mingling with the students (Agnes Scott is a women’s college), talking to the faculty (“his” faculty), teaching classes, and giving one big public lecture. He loved to stroll about the grounds at night, and so the bronze statue by George W. Lundeen, located in the Alumnae Garden, depicts him composing his famous poem “Acquainted with the Night.”

The course of true love did not always run smooth. Frost had a reputation for being prickly. During his last visit in 1962, when he made some critical remarks about Samuel Taylor Coleridge at the English Department lunch, he found his statements refuted by Romantics scholar Janef Preston. Later he said he thought that the College didn’t like him anymore and that he would not go back. Although Dr. Alston met with him at his 88th birthday party and smoothed his feathers, Frost indeed did not visit the campus again as he died the very week of 1963 that he was to return. 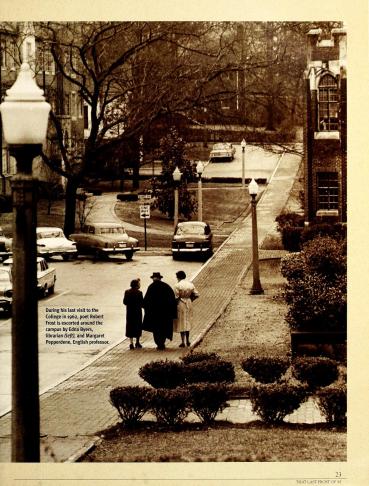 My favorite piece in the collection is the handwritten copy of “Peril of Hope.” (Click on the link to view the finished version.) Former English professor Margaret W. Pepperdene, in her article “‘That’s Me Leaving Tracks’: Robert Frost and Agnes Scott College,” tells of the 1961 visit she made to Frost’s Vermont home. Her mission: to get him to sign releases for the bibliography of the Frost holdings that librarian Edna Hanley Byers was preparing for publication.

When Frost came across the penciled copy of “Peril of Hope,” which he had written out for Mrs. Byers in draft form, he said, “‘Where did you get that?’” Later, he offered to make a fresh copy of the poem, one that would surely have omitted his corrections, his “tracks.” Pepperdene declined. She notes that Frost didn’t like his readers to think that he had to revise his poems. Rather, he preferred the impression that they came to him in one perfect burst of inspiration. (Most writers will tell you, however, that the real work comes in the revision, that revision is a joyful part of the entire writing process.)

Note: click on this image–and other images–to see in full size.

I grew up around the corner from Agnes Scott. Although I was aware of Frost’s visits, I was too young to appreciate the remarkable events taking place there. But today, thanks to Agnes Scott’s generous and easy access, anyone can visit the collection. Visit the campus web site for hours of operation and a map showing the McCain Library, the Alumnae Garden, and free public parking.

The Frost Collection illustrates the literary treasures we often overlook. Many colleges and universities have rare book collections and the papers of well known writers. Agnes Scott, for example, also owns the papers of Catherine Marshall, author of A Man Called Peter and Christy. They are available to scholars for research. What follows is a sampling of other literary collections, permanent or temporary, convenient for day excursions from Atlanta. Check your own local colleges and libraries for further ideas.

Do you know of other literary collections open to the public? If so, please share.

4 thoughts on “Frost in Springtime”