The following is a reprint of an article I did several years ago for my clan journal, Journal of the Clan Campbell Society (North America). (Burns is a sept of Clan Campbell.) 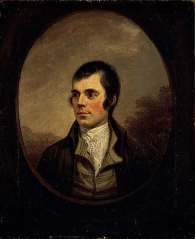 January 25th is a day of celebration around the world. From Montana to Moscow, India to Indiana, admirers of Robert Burns honor him with a birthday bash unlike that held for any other poet: the Burns Supper. A typical Supper begins with the Selkirk Grace, followed by the parade and then consumption of the “Great Chieftain o’ the Puddin-Race”–the haggis, speeches on the Immortal Memory, and finally, rousing poems and songs. This tradition dates back to 1801, when, five years after Burns’ death, friends gathered to pay tribute to his memory. Nowhere in the world is this celebration more special than here in Atlanta because the local Burns Club hosts its annual supper in a cottage that is a replica of Burns’ birthplace and boyhood home, a replica which is the only such building in existence.

The poet’s birthplace, a two-room dwelling consisting of a butt, ben, and byre, and once shared by the burgeoning Burns family and its livestock, now fronts a busy street in the prosperous town of Alloway, which has grown up around it. Because of its location, the Atlanta replica, at least its exterior, probably appears more like the original than the original. This cottage sits back from Alloway Place on a woodsy two-acre lot (still listed on the city plat as Poet’s Corner) that seems years, not just miles, away from 21st Century Atlanta.

Now on the National Register of Historic Places, this lovingly crafted building was conceived in 1907 and finished in 1911, after Thomas H. Morgan, a club member and architect, obtained the exact dimensions of the Alloway cottage. The genesis for building such a replica may have been inspired by the Lewis and Clark Exposition of 1902, which hosted a parade of palaces, including the Burns cottage. Though this earlier and temporary structure has long since disappeared, Atlanta’s cottage is anything but temporary, built of Georgia granite, rather than the clay of the Burns original. Another practical difference is the roof of asphalt shingles after an effort to replicate thatch ended with an invasion of mice. The laying of the cornerstone, November 5, 1910, is commemorated by a plaque reading, “Laid by the Most Worshipful Grand Lodge of Georgia, Free and Accepted Masons in tribute to the Memory of Our Great Scottish Brother.”

The interior of the cottage has, of course, undergone changes from the original to make it useful as a club house. Chief among these is the transformation of the byre, traditionally housing livestock and farm materials, to an assembly room, now festooned with tartan banners and likenesses of Burns. A practical change was the addition of a kitchen and restrooms to the rear of the building, the latter necessitated by the city’s outlawing of privies. Such a detail is a reminder of how old the cottage is, old at least in Atlanta, which sometimes seems oblivious to history. Indeed, in the early days of the club, the cottage sat at the end of the trolley line and across from the Confederate Veterans’ Home. The trolley driver knew when the club met and would blow his whistle on the last run, lest tardy members were left behind and had to walk the four miles home.

Though the cottage celebrated its centennial in 2011, the Burns Club itself reached that milestone in 1986 – 100 years prior to its founding was the year of Burns’ death. And so the number “100” has become important to tradition: the by-laws call for a membership of never more than 100. The Atlanta Club, a social, literary, and memorial society, is 53rd in seniority among the hundreds of such clubs recognized by the international Burns Federation. It is also the oldest continuous literary society in Atlanta, hosting lectures by authors on the current books and by scholars on such subjects as the chapbooks of “Tam o’ Shanter” and the “Wit and Wisdom of Winston Churchill.”

As important to the club as its literary traditions is its warm comradeship, evident to me by the welcoming tour I received from (then) club president Victor Gregg on the very day he was supervising preparations for the Burns Supper. Another member, Cam Gould, remarked on the diversity of backgrounds reflected in the membership but the lack of class distinctions among justices, professors, tradesmen, even goat farmers. “Once you walk through that door,” he noted, “everyone is just friends.” (I must add, however, that Atlanta’s club holds on to its tradition of not admitting women to its membership.) 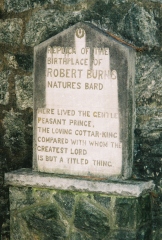 Plaque to the
“Gentle Peasant Prince”

It is this same sentiment which most endears Robert Burns to me. Who else could have written a song now sung around the world every New Year’s Eve or Hogmanay? “Auld Lang Syne,” a song which has the emotional power to transcend its own archaic dialect, celebrates old friends and old times, even when the singers probably don’t understand the literal wording. Who else could have written an anthem so powerfully praising the nobility of the common man of “honesty poverty”–“A man’s a man for a’ that“?

Who but the “ploughman poet,” who died a pauper at 37, yet lives  in the wealth of memory and fellowship.

The Burns Cottage is located at 988 Alloway Pl. in Atlanta. While it is not open for tours, visitors are welcome to walk about the grounds at any time.

6 thoughts on “Robert Burns, Very Much at Home in Atlanta”