Over a glass of sunset.

The sky is drunk

Yesterday, we celebrated the year anniversary of The Poetry of Yoga, Volume 2. Today let’s take a closer look at HawaH, the man who edited the two volumes and the poet whose sensibility shaped them.

Born in New Jersey, HawaH spent a portion of his youth in India and has since traveled to over 30 countries. Exposure to the Third World  opened his eyes to the less fortunate here as well as abroad. In 1998, he took a year off from college to join Americorps as a community organizer and mentor to youth in poverty-stricken sections of Washington, D.C. He then returned to American University to complete his degree in Peace and Educational Philosophy. Soon after, he co-founded One Common Unity, a non-profit that receives 50% of the proceeds from  sales of The Poetry of Yoga. 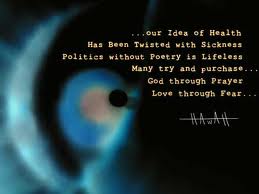 CK: Yours has not been a journey travelling a straight path from point A to point B. How has such a peripatetic lifestyle been essential to you as an artist?

HawaH: The road we take is long and winding, and there are some doors we open, some we walk by, and some we knock on but nobody answers. I knew from a young age that I would hold myself accountable to the privilege of my birth in the United States.  I always knew I wanted to give back. I was just never sure exactly how I would be most effective. This question is still the one that consumes my thoughts.

As an artist my creativity is sparked by consistently putting  myself in new places. New situations that shake my world perspective bring fire to art. Often when I’m traveling to new places I find myself drawing more, painting more, writing more poetry. There is something about being in the same place all the time that makes it difficult for me to be as artistically expressive, but being in the same place for extended periods allows me to build institution and put my hands into the roots of community.

Being an artist has been a challenge to me as I feel it sometimes takes away from my ability to dedicate myself as an organizer and activist. The rush of adrenalin that drives art requires me to be introverted and in solitude…but in the work of community building and setting fire to revolutionary pursuits, I have to be immersed in constant communication. Doing art in collaboration with others is another option, but it is of course a different kind of creativity than the one birthed from solitude.

CK: Please describe your writing process.
HawaH: That’s a great question. I think.  To me  a poem is like a sculpture that you constantly are carving and chipping away at with your chisel. I want first just to have the “brain dump” and get everything onto the page that I can, without trying to censor or think too much about flow, tempo, stanzas, etc…I’m just putting the body to the 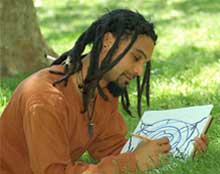 words, placing down the skin. The organs and bones come later and are part of that chiseling process.  As a minimalist, personally I prefer poems that say more with less. I attempt to get rid of repetition of words (unless it is a purposeful tool to create a tempo or rhythm) and prefer to utilize incomplete sentences, commas in awkward places and meanings that transcend just your personal experience. Although I might be writing something for myself, I’m also writing for a collective consciousness that is able to connect to the underlying universal emotion. I need to keep both readers in mind at all times for the poem to be relevant to you, too.  Some poems are only for me, and they are poems that I’ll probably never share publicly because they won’t make any sense to those that are not in my head.
CK:  How is your approach different when you compose spoken word?
HawaH: I’m less minimalistic when writing spoken word. To turn a poem written for the page into spoken word, I typically would add more clauses and transitional sentences and words into the pieces. I’m also working a lot more with pulse and need to be able to feel it rolling off my tongue more than rolling off the ink onto the page.

HawaH in spoken word performance at The Kennedy Center

CK: You also work under the name Everlutionary. How is that different?

HawaH: I use it as a separate name reserved for my artistic creations, including my work on the stage during spoken word performances. Everlutionary is also a project that I’m working on. It’s still many years from complete, but ultimately I hope it will be the title for a series of multi-media artistic pieces that reflect on how cooperation is just as important for species survival as competition.

CK: What’s your next project?

HawaH: At the moment we’re putting the finishing touches on a new documentary film called “Fly By Light.” It’s been a labor of love that has extended over the past 2.5 years. I’ve been fortunate to be working alongside a stellar team. My old friend Ellie Walton is an award-winning filmmaker and also the director of our new film. In addition, we have had amazing support through our chief executive producer Steve Ma. This  film project follows the lives of 4 inner-city youth from D.C. who participate in One Common Unity’s flagship youth program called Fly By Light.

With the film in the final stages of post-production, we are anticipating releasing it in Spring of 2014 at a major film festival. The next step is bringing the film, with accompanying curriculum, to high schools and universities.

Are on my feet

Why your socks are ripped

The draft moves my heart.

Note: My apologies to those of you who received a version of this post Monday. I clicked on the wrong button.

Do you agree with HawaH that certain artistic pursuits require tapping a more introverted self?