My latest foray into Middle Eastern life is through the novel A Teaspoon of Earth and Sea, by Dina Nayuri, which traces the progression of Iran’s religious and moral change in the late 1970’s. This novel is not a history lesson on the Iran Revolution, though the story does takes place directly within the epicenter of Iran’s struggle. Instead the author focuses on the life of the young female character, Saba Hafezi, who once lived in personal and civil freedom with her parents in the city of Tehran, before the revolution gained strength. Through the girl’s move to the village of Cheshmeh, the author brings in bits and pieces of the revolution to demonstrate the unfairness and restraint the new movement placed on females of all ages in the country, especially those with free spirits and intelligence.

Within the pages of this novel Nayuri gives us several female pairings, each representing the opposite of the other. Saba remembers her mother being a rich Christian Iranian woman who was well educated, well traveled, and who aspired to be everything she could be as a woman and a mother. She continually encouraged her daughters, Saba and her twin sister, Mahtab to seek the same even when the revolution seemingly takes the ability to reach that dream away.  She says,

If you don’t prove yourself smart enough to heal bodies alongside men or design heaven-on-earth structures like the thirty-three arches or write beautiful verses like the Rubaiyat, then the world might decide that you will be the lady who makes the best cakes or the most savory stew or the best opium pipe for her husband. That will be your role.  (Bahareh Hafezi)

In contrast to Saba’s mother, Khanom Basir is a female village elder, a Muslim, happy with her lot in life and self-appointed surrogate mother to Saba. Basir sees the ideals Saba’s mother aspired to and the freedom and education she gave her daughters as folly. She says, “But Bahareh Hafezi [Saba’s dead mother] didn’t pay attention to village ways. She was too young and she thought being a good mother meant being strict with the small things . . . while teaching the girls to rebel against the impossibly big things.”

Nayuri’s next pairing of women is Saba and her childhood friend Ponneh. Saba is everything Ponneh wants to be, but can’t. Ponneh sees freedom in Saba’s education and her love of all things American, and struggles with her poverty not only of possessions, but of education. (Personally I felt Ponneh waged more of a war against her position in life than Saba, especially after teen Ponneh experienced the unfairness of the revolution firsthand.) Saba loves her friend Ponneh, but wouldn’t want to be poor like her. We, as readers, see over and over again how Saba’s wealth gets in the way of relating to Ponneh and the rest of the village.

Saba and Khanom Basir are also a pairing of contrasts, but not as obvious a pairing as those mentioned above. To Saba, Khanom Basir represents the opposite of everything she has grown up believing about a woman’s place in the world.  To Khanom Basir, Saba’s way of thinking and her initial upbringing make her a threat to Basir’s Muslim faith and her plan for her son, Reza. Nayuri deepens the contrast here by shifting to Khanom Basir’s inner thoughts:

I want my son to have a clearheaded [sensible] wife, not someone who is lost in books and Tehrani ways and vague things that have nothing to do with the needs of today, here in one’s own house. (Khanom Basir)

Basir sees Tehrani women and their independence and intelligence as a threat to her way of life and the life of her family, which, even though Basir loves Saba, still makes Saba ineligible to marry Basir’s son (whom Saba loves) or any other Muslim man. 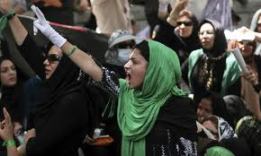 Nayuri has created female characters and situations representative of the 1970’s. She shows us the unfairness and dangers involved in being a woman during this era, but I found her characters not as compellingly written as Khaled Hosseini’s female characters in Kite Runner and A Thousand Splendid Suns. Clearly this is my opinion and should not be seen as something that would or should taint the enjoyment of Nayuri’s overall lovingly crafted story.

Have you read A Teaspoon of Earth and Sea? Did you learn something new about the Iranian Revolution after reading it?

2 thoughts on “A Teaspoon of Earth and Sea: A Novel of Contrasts”