Even though I grew up in a community of row houses in Philadelphia, there was a small town feel to our neighborhood as families looked out for other families.  There was even a small town feel to the farm area where we moved to in Gettysburg, Pennsylvania, six miles from the center of town.  People need each other in any size community for protection, company, and friendship.

My friend Carla recently introduced me to Billie Letts, the author perhaps best known for Where the Heart Is.  In turn, I introduced her to my sister who is spreading the word about the warm-hearted author who has been filling our recent weeks with the rest of her books.  Another kind of community has been born!

Where was I when Where the Heart Is was first published and later when Oprah’s Book Club recommended it?  It even won the Walker Percy Award in 1994, and in 2000 the book was made into a movie, and I didn’t know about Billie Letts until 2013.

Where the Heart Is concerns Novalee Nation who secretly lives in a Walmart in Sequoyah, Oklahoma and who later gives birth to her daughter there.  Because of her unusual circumstances, she attracts media attention, and the town takes her under its collective wing.  The cast of characters is truly “American” with Native Americans, African Americans, deeply religious Americans, not so religious Americans, and others.

Forney Hull acts as the local librarian and houses the library in his own home where he can take care of his alcoholic sister.  He befriends Novalee and encourages her to broaden her education by reading.  Sister Husband invites Novalee to visit her and eventually helps Novalee live independently. Benny Goodluck, a Native American who runs a nursery, gives Novalee a buckeye tree which fuels her budding interest in gardening.  Moses Whitecotton, a photographer, and his wife befriend Novalee, and provide her with a real family. 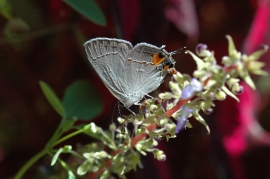 As soon as I finished Where the Heart Is, I bought and devoured Shoot the Moon and then Honk and Holler Opening Soon.  For a week I’d slip upstairs for my afternoon “nap,” a time to curl up on my bed in a pool of sunshine with my cats sleeping around me.  I’d eventually close my eyes for a few moments, but I’d soon be back “living” with Letts’s characters.  I’ve got Made in the U.S.A. now and am taking my time with it.  Published in 2008, it is, sadly, the last of her books so far.  Her husband, who had acted as her editor, died in 2008.

Billie Letts makes me want to return to small town life where the pace may be a bit slower and easier and where neighbors look out for one another.  Her books remind me a little of Edgar Lee Masters’s Spoon River Anthology in that almost every character is well-rounded and could have been the main character in a book about him or her.  If you like Kent Haruf, who writes about one small, fictional town, Holt Colorado, you will enjoy Billie Letts.

How can we develop a small town sense of community while living in a large city?

2 thoughts on “It Takes a Small Town…”