No one says a novel has to be one thing. It can be anything it wants to be, a vaudeville show, the six o’clock news, the mumblings of wild men saddled by demons. – Ishmael Reed

What is a novel? Where did it come from? And for that matter, where will it go? Before we can speak of this art form, we need to know what it is: Most agree the term refers to a book-length narrative in prose which connects fictional characters and events. Some argue that to be considered a novel, a story’s characters have to evolve over time.

If you agree with these guidelines, then perhaps the earliest known novel is Japanese. The Tale of the Lady Ochikubo was written by an unknown author in 980 A.D. Its story concerns a young noble woman who is abused by her father and stepmother. Eventually she meets a general (Michiyori), the two marry and live quite happily. The narrative ends as Ochikubo and Michiyori take their revenge on the Lady’s family by setting up a series of humiliating events. 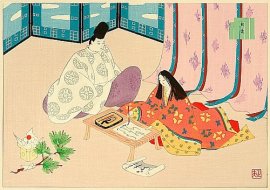 From The Tale of Genji–another early Japanese novel

If you don’t agree that characters must psychologically evolve, then the book-length story’s origins might be set in ancient Egypt (2000 B.C.). Steven Moore covers the pros and cons of this argument with much enthusiasm in his book The Novel: An Alternative History (Continuum, 2010). There he traces the form from ancient Egypt to Greece, India, Japan, China and Scandinavia, with vivid summaries of family sagas, mythology and epic adventures to illustrate his points.

Either way, what strikes me is that the novel’s origins are secular. Where poetry, music and theatre have their roots in religion (human to deity), the novel is deeply rooted in human-to-human relations. Perhaps that explains its slow rise to popularity. For really, it isn’t until the 1600s that the form begins to take hold. This timeframe neatly coincides with the emergence of a middle class – at least in Western Europe. And it appears that the novel (as defined to include change) took its strongest hold and flowered there. 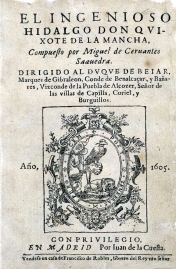 There is no disputing that Don Quixote by Miguel de Cervantes is one of the earliest and most influential works of Western fiction. Originally titled The Ingenious Gentleman Don Quixote of La Mancha, the Spanish novel first appeared in two volumes: one in 1605, the other in 1615. Written in a style known as picaresque (from “picaro,” meaning rogue or rascal), the narrative unfolds in a series of episodes, each with its own dramatic arc. In it, a nontitled nobleman (Alonso Quijano) has read so many chivalric stories that he decides to set out on his own quest. Knighting himself Don Quixote, he recruits a simple farmer (Sancho Panza) as his squire. Through a series of misadventures, Quixote is eventually delivered from self-delusion, and Cervantes gently satirizes Catholicism, noblesse oblige (upper-class privilege) and Spanish nationalism.

The Princess of Cleves is another important work from the 17th century. Published anonymously in 1678, the French narrative can be considered an historical novel. Almost every character is real, and the events which unfold are largely faithful to written records. The plot takes place in the royal court of Henry II and concerns (yet again) a young noblewoman who wants to marry up. She settles for a not-so-wealthy suitor, and once they are married, promptly falls in love with someone else. The tale involves court intrigue and deception and winds up as such stories often do: with its heroine in a convent, her husband dead of a broken heart and her lover off in search of a new paramour. Apart from historical accuracy, what’s also significant is the book’s psychological bent: readers actually enter into the Princess’s inner thoughts. We are shown the conflict in loyalties to husband versus lover.

By the 18th century (1700s) the Age of Reason had taken hold. In Western Europe, the growth of science, colonization and international trade had helped the merchant (middle) class to flourish. To movers and shakers of the period, it seemed that almost any goal could be achieved – including independence from monarchy. Applying Archimedes’ mechanical principle to politics, Thomas Paine wrote: “Had we… a place to stand upon, we might raise the world.” 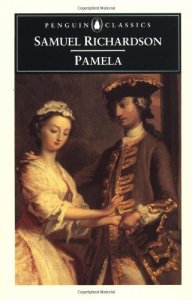 We see these values reflected in the novels of that time. In Pamela (published in 1740 by Samuel Richardson) a young English woman – not of noble birth! – repels the advances of her employer and, due to her virtuous behavior, eventually wins his offer of marriage. And in Robinson Crusoe (published in 1719 by Daniel Defoe), a young Englishman – also not of noble birth – gives in to his love for the sea, eventually joining the slave trade. His ship gets caught in a storm, and Crusoe winds up by himself on an island in the Caribbean. There he uses ingenuity and self-reliance to carve out a new life (and ultimately goes on to colonize and enslave others).

By the 19th century (1800s), the Industrial Revolution had gained momentum, bringing with it a new consciousness. While 18th century rationalism had resulted in colonization and enslavement to people and/or mechanical production, the self-labeled Romantics of the early 19th century relied upon feeling. During this period, heart replaced mind as a driving source for artistic guidance. Instead of a foe to be conquered, nature became a source for inspiration, while intuition and imagination served as the gateway to experiencing Truth with a capital T.

In Part Two of this history, I will describe some Romantic novels, follow the form to the present, and speculate about its future.

Meanwhile, a question: How would you define the novel?

4 thoughts on “A Brief History of the Novel – Part One”