Is there a  place on earth prettier than North Georgia in October? The day was the kind you wait for all year: a sky of blue fire, leaves  igniting into red and gold, and a temperature  perfect for hiking. We were headed to the Foxfire Museum. 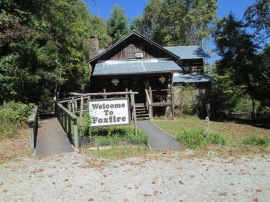 We stuck to the four lane, passing up the charming towns of Cleveland and Piedmont on old US 441 and  missing the grandeur of Tallulah Gorge. Within two hours of leaving Atlanta, we arrived in Mountain City. We ate at The Dillard House, serving family-style Southern cuisine since 1917. Dinner included green tomato relish, fried okra, country fried pork chops, fried chicken, baked ham, meatloaf, mashed potatoes, acorn squash casserole, butter beans, Lima beans, creamed-styled corn, apple brown betty with vanilla ice cream, and much more. Afterward, I wished I had worn pants with an elastic waist. Joe ate so much I accused him of being a cow (having four stomachs).

But I’m getting ahead of myself.

Last year I took time off from writing my historical novel to learn more about its physical world—19th century rural Georgia. Along the way, I had many guides, friends and family, who toured me around a  family farm, guided me on nature walks, drove me down to tiny Oconee (the novel’s setting), took me to Jarrell Plantation north of Macon, and patiently explained how to make and set traps and how to load and fire guns. And then there was my Uncle Charles, who let me hold his rabbit ear shotgun and filled me up with family stories to add to my narrative.

Armed with note cards and photographs, I thought I was ready to resume writing. But then I wondered, How do you plant by the signs? How do you wash clothes in an iron pot? How do you cook over an open hearth or on a wood-burning stove? And I remembered the Foxfire books. 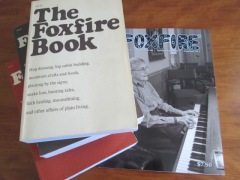 The story is well known:  Eliot Wigginton, a high school English teacher in rural North Georgia grappling with students uninterested in the curriculum, converted his course into a learner-centered study of Appalachian culture.  Soon students were out interviewing neighbors and family members about the old ways.  They published these interviews  in the Foxfire Magazine, begun in 1966 and still in operation. Under the guidance of local experts, students tried their hands at log splitting, barn raising, and so on, to write such vivid articles as “Chimney Building,” “Making an Ox Yoke,” and “Buggers, Witches, and Haints.” In 1972, Anchor Books pushed the first anthology, entitled The Foxfire Book. It became a bestseller.

(“Foxfire” is the name of a  bioluminescent fungus growing on rotting wood in damp forests and producing a dim blue-green glow seen only in the dark. Similar to its namesake, the student magazine illuminates a vanishing culture.) 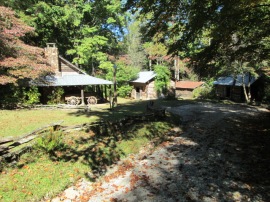 This simple idea has yielded extraordinary results. Beyond Wigginton’s initial goal for his students to value good writing skills is the revolutionary idea of learner-based education, since adopted by school systems across the country. In 1982, the play Foxfire, for which Jessica Tandy won a Tony Award, appeared on Broadway. In 1989, Wigginton was awarded a MacArthur Foundation Fellowship, the so-called genius grant. And although Wigginton is no longer associated with the project, students are still learning and writing about the old ways. The most tangible result may be the Foxfire Museum, 20+ log structures situated along one side of Black Rock Mountain, purchased with royalties from sales of over 8.5 million copies of the various anthologies and overseen by the Foxfire Fund.

Some of the structures are original, such as the Savannah House, built in the 1820s, disassembled and moved from near Savannah Creek in Jackson County, NC. Measuring 21 feet by 21 feet, it is constructed of dovetailed poplar logs resting on locust sills and joined by wooden pegs. Imagine its occupants, four generations of the Richard Yates family, three of whom had ten children each, living in less than 500 square feet, plus a loft. Other structures, like the chapel, are “new” construction, that is, built from logs salvaged from other buildings, since, in the case of the chapel, no community would  give up its church. An interesting detail of the chapel is its interior paneling of wormy chestnut, a species once widespread in the area, now almost extinct from blight.

showed me how she weaves scarves. The most time-consuming part is threading the loom, taking up to three hours. She has another loom set up to weave tartan fabric for kilts. This loom takes her four and a half days to thread. Sharon’s niche is weaving obscure tartans, not readily available through commercial weavers, which she sells to kilt makers.

Trying to get the historical details right has made me ponder how different our world is from the one I’m recreating. How would I have fared with no central heat, electricity, or plumbing? Looking at the Museum’s hog scalding pot reminded me how much I love pork, but would I enjoy it as much if I had to drain the hog’s blood, scrape off its hair follicles, and do the butchering? Uncle Charles knows what this was like. In fact he remembers sitting in the smokehouse, his shotgun ready, listening for rats. He pulled up the slide on the dark lantern, aimed, and shot. After he cleaned off the rat splatter and cut away the bitten places, he rubbed red pepper onto the ham (to discourage other vermin). Two weeks later the family enjoyed baked ham for dinner, a meal probably not much different from what we ate at The Dillard House.

Joe tries out the stilts.