Eighteen miles south of Wetumpka, Alabama, the Coosa and the Tallapoosa merge to form the Alabama River just north of the state capital of Montgomery.  This city, founded on the site where Native American tribes once flourished on both sides of the river, is steeped in Civil War and civil rights history.  Home to the Little White House of the Confederacy and the Civil Rights Memorial, it is also the site of the Alabama Shakespeare Festival and the Hank Williams Museum. 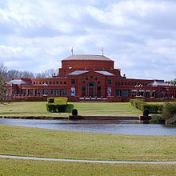 The Alabama Shakespeare Festival (said to be one of the ten largest Shakespeare theatres in the world) is located on the north side of town in a pastoral setting only about a mile from Interstate 85.  Initially housed in a high school gym in Anniston, Alabama, the ASF was relocated to Montgomery twenty-five years ago and boasts two stages, the Festival, which seats almost 800, and the Octagon, which seats fewer than 300.  Along with the production of at least three Shakespeare plays each season, the theatre also offers other classic and contemporary productions and fosters regionally themed drama production. The matinee offering on the Saturday of our most recent visit was an intimate production of Gods of Carnage in the Octagon followed by a stimulating question and answer session between the four actors and audience members

singer/songwriter who was posthumously awarded a Pulitzer Prize in 2010.  It is home to the Cadillac in which Hiram King Williams died at the age of twenty-nine as he was being driven to a concert in Canton, Ohio, much of his signature and distinctly “country singer” clothing, an eclectic array of other memorabilia, and, best of all, the handwritten, spelling-challenged drafts of some of his most famous songs.  The museum features a vintage juke box that allows the visitor to choose favorite songs to accompany the tour.   As seems to be the case with most museums, the tour ends in the gift shop, from which I unfortunately returned home to family with only one beer bottle “koozie” indicating that I had been “’HONKY TONKIN’ at the Hank Williams Museum.”

Shakespeare today is often seen as the domain of the intellectual, cultural elite, a misconception that many an English teacher has had to “correct,” as we have tried to initiate students into an appreciation of the literature.   Similarly, some folks unschooled in the art of country music may need some instruction in understanding the allure of Hank Williams.   In its tribute to Williams, the Pulitzer Prize Board praised him as a “songwriter who expressed universal feelings with poignant simplicity.”  While today’s audiences and readers may not consider Shakespeare “simple,” history tell us that his plays held great appeal not only for the gentry but for the common folk, the “groundlings” who were willing to pay a penny (a huge sum for these laborers) and stand up for an entire play.  If Hank Williams were living and performing today, it is easy to imagine factory workers, farmers, and college professors rubbing shoulders in the music hall.

The commonalities between the messages of Williams and Shakespeare have intrigued many.  In “Country Matters:  Shakespeare and the Music in the American South,” Robert Sawyer refers to the numerous comparisons that can be drawn between some of Shakespeare’s sonnets and the many Williams ballads that poignantly express the heartache associated with disappointed love.  The Los Angeles Times article “’Hamlet,’ Hank and the Bard” of August 8, 2011 tells the interesting story of the city’s production of Hamlet by the Independent Shakespeare Co. and the incorporation of Williams’ song “I’m So Lonesome I Could Cry” into the drama.  Melissa Chalsma, the company’s artistic director, explains how well the following lines from the song express the loneliness and isolation so poignantly felt in the play:

He sounds too blue to cry

The midnight train is whining low

I’m so lonesome I could cry.

On our recent weekend visit, my longtime “literary” traveling buddy and I filled a Saturday with a visit to the “Hank” museum, attendance at an ASF matinee, and a visit to a Saturday Riverfront festival, a celebration of the city’s diverse culture and a signal of the revitalization of its downtown. At the end of the day, we were happy to return to one of the city’s older neighborhoods, relax in the sitting room of the Lattice Inn bed and breakfast, enjoy a glass of wine with our host, and debrief without giving a thought to driving home.

I hope readers will share their experience of other such “gems” that might make for a relatively inexpensive weekend of literary and cultural adventure.