Starting this month we are branching out from our regular reviews to cover  new books, fresh out of the oven.  We’re taking a chance, just as you do when you read the jacket copy while browsing in your favorite  bookstore. We can’t promise to love every page, every character, but we do promise not to waste your time with books we dislike or, even worse, are indifferent to.

This month I’m reviewing two books about books, that is, about writers or booksellers, Z: A Novel of Zelda Fitzgerald by Therese Anne Fowler and The Bookman’s Tale: A Novel of Obsession by Charlie Lovett (due out in June).  Z is women’s period fiction, about the  wife of F. Scott Fitzgerald, author of The Great Gatsby.  Published in April, it  is now #24 on The New York Times hardback bestseller list.

Although the title suggests Z is about Zelda Sayre Fitzgerald, it is really the story of a marriage between two strong- willed people who become icons of the Twenties, as popular as any Hollywood couple. They crave not only  constant excitement but also self-fulfillment.  Scott Fitzgerald wants his fame both ways: he and Zelda party hard—drinking, carousing, jumping into public fountains, Scott even partly undressing in a theatre to out shimmy the dancers on stage. His notoriety fuels sales of his first novel,  This Side of Paradise, and the stories he sells to the slicks. But he also wants literary fame. It’s no surprise that readers obsessed with flappers don’t take to the lyricism and tragedy of The Great Gatsby, a sales failure that blocks Fitzgerald for seven years.

What does Zelda crave? Fowler depicts a teenaged Zelda as a tomboy-debutante full of “pepper,”  defying the social norms of Montgomery.  She first spots Scott at a ballet recital. As she takes her bow, her eyes are caught by “a pair of tall boots paler than the others.” She follows the boots upward to “olive-colored breeches, a fitted uniform tunic, and, above it, an angelic face with eyes as green and expressive as the Irish Sea, eyes that snagged and held me as surely as a bug sticks in a web…”

Later Zelda wants to unstick herself to be her own person, to write (she had short stories and even a novel published, sometimes under Scott’s name to increase the sales price), paint, and dance. Although she is not interested in the women’s suffrage movement, she senses that she is regarded as no more than her husband’s wife, as when they visit the Paris salon of Gertrude Stein, where the women are moved out of the way so that Stein can counsel the men on their art. 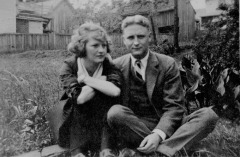 Zelda  retreats from the world of Scott’s drunkenness to the world of ballet for its discipline and physical satisfaction. There, propelled by her desire to succeed and by what scholars now think was bipolar disorder, she drives herself, on bloody toes,  to collapse. Institutionalized and treated with all the latest methods such as insulin-shock therapy, she is released only after she  convinces her doctor and Scott that she thinks the right way.

In her journal, she writes: “Because most women are supported by their husbands entirely, the women are bound to offer support of an equivalent nature in return. This is a cooperative arrangement and a correct one.” But then she adds to herself, “There, that oughta do the trick.”  And it must have. After sixteen months of incarceration, she says, Dr. Forel and Scott believe that “they’d finally, successfully reeducated me…”

I have switched lines 2 and 4 of Edna St. Vincent Millay‘s poem “First Fig”  to be a fitting description of the life of the Fitzgeralds, America’s Golden Couple:

My candle burns at both ends;
It gives a lovely light;
But ah, my foes, and oh, my friends—
It will not last the night!