Nature’s first green is gold,
Her hardest hue to hold.
Her early leaf’s a flower;
But only so an hour.
Then leaf subsides to leaf,
So Eden sank to grief,
So dawn goes down to day
Nothing gold can stay.

I took as my subtitle to this post “Nothing Gold Can Stay,” the poem by Robert Frost, quoted above.  The Golden Age of the Cherokee in New Echota came to an end when,  in 1828, gold was discovered on Cherokee land near what is now Dahlonega.  As in California twenty years later, thousands of prospectors illegally flooded the landscape. Georgia, which had chafed under the notion of a sovereign nation being within its borders, passed oppressive laws aimed at the Cherokee and their sympathizers and enforced them with the state militia. For example, Indians were not permitted to testify against  white men. In despair, The Cherokee Phoenix spoke for the Nation as it described the enormity of the events:  “It is literally robbery, robbery.”

This 4th edition of Volume 1 includes portions of the Cherokee constitution.

Rather than fighting a battle, the Cherokees fought in court.  Samuel Worcester, the white missionary, was arrested for failing to get a permit to remain in Cherokee territory. He took his case to the US Supreme Court, which, in a decision written by Chief Justice John Marshall, ruled that the Cherokee Nation was a distinct community over which Georgia had no jurisdiction. President Andrew Jackson, however, anxious to remove the Cherokee (as well as the Creeks of Middle Georgia), refused to enforce the law.   In 1838, General Winfield Scott moved in with troops to begin rounding up the Cherokee while Georgia held a lottery to distribute the land to its white citizens. Private John Burnette observed the Cherokee people taken from their homes and herded like cattle into stockades where they slept “with the sky for a blanket and the earth for a pillow.” 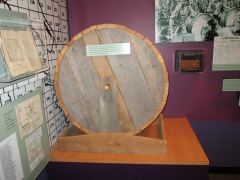 By October of 1838, the Cherokee began the infamous Trail of Tears,  their 1000 mile march to Oklahoma in wagons, on horseback, on riverboat, and on foot.  Four thousand died along the way. By Spring of 1839, white Georgia was purged on its Cherokee residents, who had ironically striven to acquire the civilized ways of the white man.

New Echota devolved into farmland. The tidy log buildings fell into ruin, with the exception of Samuel Worcester’s home, which is still standing although extensively renovated. Today, you can see twelve original and reconstructed buildings, including the Council House, the Print Shop, Worcester’s home, as well as log homes reflecting the lives of the middle class and of subsistence farmers. Most striking, however, is the expanse of grass marked by street signs, indicating the town that disappeared.

(In addition to numerous web sites hyperlinked in this article and my personal “field trip,” I must acknowledge using the excellent DVD “The Cherokee Nation: The Story of New Echota,” written by Jeff Stanell and produced by Jim Couch and Becky Marshall.)

Bury My Heart at Wounded Knee by Dee Brown (Non-fiction, an alternate history of the United States)

The Color of Lightning by Paulette Jiles (Fiction, settlement of Texas after the Civil War, relationship between white settlers, a former African American slave, and American Indians)

The Round House by Louise Erdrich (Fiction, 2012 National Book Award Winner; a Native American woman is raped, but she isn’t sure exactly where, tribal land or “white” land, and the prosecution of the white rapist depends on the location.  Recent US legislative battles echo this plot.)

Thirteen Moons by Charles Frazier (Fiction, the protagonist, an orphaned boy, apprenticed under a Cherokee, an eyewitness to the Indian Removal, aka Trail of Tears. Frazier commissioned a Cherokee translation of an excerpt of his novel for the Cherokee Literature Initiative of the Museum of the Cherokee Indian.)

Do you have any other books about Native Americans to recommend? If so, please give us a bit of the story.

2 thoughts on “A Different Kind of Southern Literary Trail: Part Two, Nothing Gold Can Stay”