What passing-bells for these who die as cattle?

Only the monstrous anger of the guns.

Only the stuttering rifles’ rapid rattle

Can patter out their hasty orisons.

From “Anthem for Doomed Youth”

Most of my professional life has revolved around treating people who suffer from what we call PTSD—Post–traumatic Stress Disorder, a response to trauma that became an official diagnosis in 1980 but was observed for centuries.  I developed a keen interest in war fiction and especially books that portray the realities of war and its traumatic aftereffects both on the combatants and on their loved ones.  World War I, once known as the Great War, ranks for me as a particularly fruitless, terrible conflict that was guided by hubris and ill-conceived grand ideas.  Although all wars have their unbearable horrors for the soldiers, World War I, with its new chemicals, more potent weapons and trench warfare, seems particularly horrendous and hopeless. 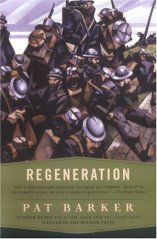 There are few books that capture the horror and the intimacy of the Great War as well as English author Pat Barker’s trilogy on that conflict.  Regeneration (1993), The Eye in the Door (1994) and The Ghost Road, which won the Booker Prize in 1995, provide detailed, horrifying and yet readable narratives about this war and its many victims.  Barker, a professor of history and politics at the London School of Economics, deftly weaves actual people and historical incidents into her fictional world.  Throughout the trilogy we follow many of the same characters during the last two years of the war.  William H. R. Rivers (1864-1922) trained in both medicine and anthropology and worked as a psychiatrist at Craiglockhart War Hospital in Scotland, a facility that treated men suffering what was called professionally “war neurosis” and commonly “shell shock”.  Barker clearly portrays Dr. Rivers’s divided self, as his success with his patients means that he is sending them back to the front and to a war effort that he knows is futile.  Billy Prior, the fictional anti-hero, is a “temporary gentleman,” a working class young man who by dint of hard work, ambition and chameleon-like adaptability has become an officer in the war. Prior is a brilliant fictional creation.  The series follows Prior’s breakdown and his eventual return to a semblance of health under the care of Rivers.  Other fictional and real personages, including poets Wilfred Owen and Siegfried Sassoon and writer Robert Graves, flow in and out of the character-driven story.

A quality of Barker’s writing is her attention to ongoing issues of the day.  Each novel features a plot line based on an actual historical incident.   Siegfried Sassoon’s war protest (landing him in Craiglockhart instead of a military court thanks to the maneuvers of influential friends) is central to Regeneration.  The Eye in the Door follows the results of a plot to kill Lloyd George as well as the persecution of homosexuals and a trial for libel.  (The articles in question claimed that a German prince had led the charge to infiltrate English society and introduce men and women to homosexuality and thus a life of debauchery in order to undermine the war effort.)  William Rivers’ extensive anthropological research in Melanesia as well as his treatment methods for war neurosis (all published materials) form the backbone of The Ghost Road.  Barker fully develops other daily life issues—negotiating class differences, coming to terms with one’s sexuality, changing gender roles—thus allowing the reader to inhabit fully this time period.

After reading the entire series by Pat Barker, I was moved to read the poetry of Wilfred Owen, killed in World War I after being deemed “fit” to return to the front.  His most famous poem, about men struggling after being gassed, “Dulce et decorum est,” quotes one of Horace’s odes, “It is sweet and fitting to die for your country.”  Pat Barker joins Owen and the ranks of brilliant writers who give us the clear and unsettling reality of war.

If you could hear, at every jolt, the blood

Come gurgling from the froth-corrupted lungs,

Obscene as cancer, bitter as the cud

My friend, you would not tell with such high zest

To children ardent for some desperate glory,

Part Two (to be published tomorrow) will explore Pat Barker’s adept descriptions of the psychological effects of war trauma.  See for yourself how she makes the war come alive.

One thought on “War and Remembrance—Part One”