World War II fascinates me.  I am intrigued by the forces of good and evil, by the choices people are forced to make in order to survive, and by the horrors that people inflict on others or have to endure. I will read any book, see any movie to learn the stories and to try to understand why it happened.

The Diary of Anne Frank is a favorite of mine, but I have just finished reading two other books, one fiction and one non-fiction, about events that happened during the war. Both are about families whose lives are uprooted or destroyed by war and about individuals looking for their past. One book is about the war in Europe; the other about Japanese internment camps in the U.S.

The Mascot: Unraveling the Mystery of My Jewish Father’s Nazi Boyhood, by Mark Kurzem, is the true story of a man

who, in his early sixties, begins to reveal his dark and tortuous past to his son. Over the course of several months, Alex Kurzem will drop a hint, back off, then gush forth his story in a torrent.

Alex’s story begins one evening when he is five and living in a small village in Eastern Europe. His mother tells him to be brave because he will die the next day. He doesn’t want to die, so he runs away. The next morning, he witnesses German Nazis slaughter all the Jews in his village, including his mother, younger brother and infant sister.

For the next few months, he wanders in the forest during the 1941/1942 winter until he is found by a band of Latvian soldiers who are Nazi sympathizers. They dress him up in a Nazi uniform and make him their mascot. Roaming around with these soldiers, he witnesses more horrors perpetrated against Jews. A Latvian family eventually takes him into their home, and, when the war ends, he immigrates to Australia with them.

Over the course of the book, he remembers much of what happened to him, but he can’t remember who he is or where he’s from. With the help of his son and others, he looks for answers. At the same time, people from his Nazi past try to stop him from revealing too much.

The Hotel on the Corner of Bitter and Sweet by Jamie Ford tells the story of Henry Lee. When the new owner of the Panama Hotel announces the discovery of belongings left behind by Japanese families after their expulsion and internment, Henry begins reminiscing about his past as a youth in 1941-1945 San Francisco. 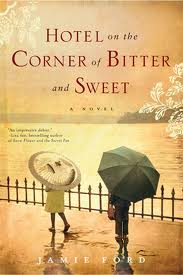 Henry is one of two Asian students at his elementary school. He is Chinese-American, and even wears a pin saying “I am Chinese.” Still, he is still taunted by the other students, as is the other Asian student, Keiko, a Japanese-American girl. They become best friends—and more, but he can never bring her home. His parents hate the Japanese because of the war in China.

When the U.S. Government drives Keiko and her family and all other Japanese families in San Francisco away from their homes to a destitute, guarded place ironically called Camp Harmony, Henry follows her. A few weeks later, the Japanese are taken to another camp farther away, but Henry takes a bus there, using all the money he has saved. Keiko and Henry promise to wait for each other. But Keiko vanishes from his life.

As his parents learn more about his friendship with Keiko, Henry’s relationship with his father deteriorates to the point that his father stops speaking to him. And then his father, lying on his deathbed, reveals a secret to Henry,

Both stories show the tragedy and grief of families and friends torn apart by war, but they also show that the survivors are able to put their lives back together. Do you know any families that suffered from war?