Christmas is right around the corner, and most of us are dashing madly through stores crowded with too many people and too much throbbing music looking for just the right presents.  Working in an independent book store gives me an opportunity, especially at this time of year, to suggest possible gift books for family and friends—the favorite part of my job.  There are, of course, the wonderfully organized customers who have detailed lists and know exactly what they want.  Easy peasy.  Others that need lots of suggestions wander aimlessly, hoping books will jump off the shelves into their waiting arms.  And, of course, there are the famous last minute shoppers who swoop in breathlessly and harried the eleventh hour, desperate for ANY book.

Although I have a working knowledge of most of the categories we offer, the mystery remains my favorite genre.  In light of this, I would like to make some suggestions for those of you out there who may be searching for a change or just new author or setting. I am not a fan of the “tea cozy” mysteries, but prefer others that have a little more meat on their bones.  Each of the following books is the first in their series.  The first two are more literary, the others humorous but well written. 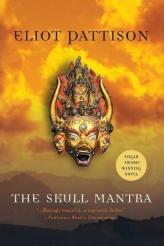 Skull Mantra is set in China and Tibet and involves a Chinese detective named Shan Tao Yun, who has run afoul of the powers that be and is sent to a Tibetan prison work camp high in the Himalayas for punishment.  In due course, there is a murder, and Yun is placed in charge of the investigation.  Imprisoned with Buddhist monks, Yun is made aware that “to the old Buddhists, words were the most dangerous of all” as evidenced by not being allowed to think or speak in any way not aligned with the Communist doctrine.  Eliot Pattison, the author, vividly depicts the ongoing systematic destruction of the Tibetan culture by the Chinese.  Intriguing story, great setting, and the reader benefits by learning of another part of the world.

mystery Still Life.  The charming homicide detective, although well into middle age, laments that “violent death still surprised him.”  As with most of the books in this series, the investigations center around the small rural town of Three Pines, peopled with quirky, yet interesting characters.  Come visit this quaint village, and I know you will want to return again and again.

The Sweetness at the Bottom of the Pie by Alan Bradley is a bit of a change of pace from the others just mentioned and is set in Great Britain in the 1950s.  In explaining the title, the book’s epigraph states:  “Unless some sweetness at the  bottom lie, who cares for all the crinkling of the pie?”  Flavia de Luce is a precocious 11 year old living with her two older sisters and an aloof father in a huge crumbling estate called Buckshaw.  Flavia is a brilliant self-taught chemist, loves solving mysteries, and roams about the countryside on her trusty bicycle, Gladys. Lest you think this too fey, I dare you to read just one of this series, and I guarantee you will fall in love with this delightful imp!

Dog On It by Spencer Quinn is a mystery with a funny twist.  Chet and Bernie are private detectives who dash about

California in an aging Porsche looking for the bad guys–the catch?  Chet is a dog, and the story is told in his voice.  Believe me, the prose is just as you might imagine it would be if a dog could really speak.  For example:  Chet says:  “I think her dress was red, but Bernie says I’m not so good with colors.”  Laugh out loud funny, this series is addictive.

Good luck to you with your holiday shopping, and please write to us and let us know what books you’re reading and which ones you are excited about.

4 thoughts on “Gift of Mystery”